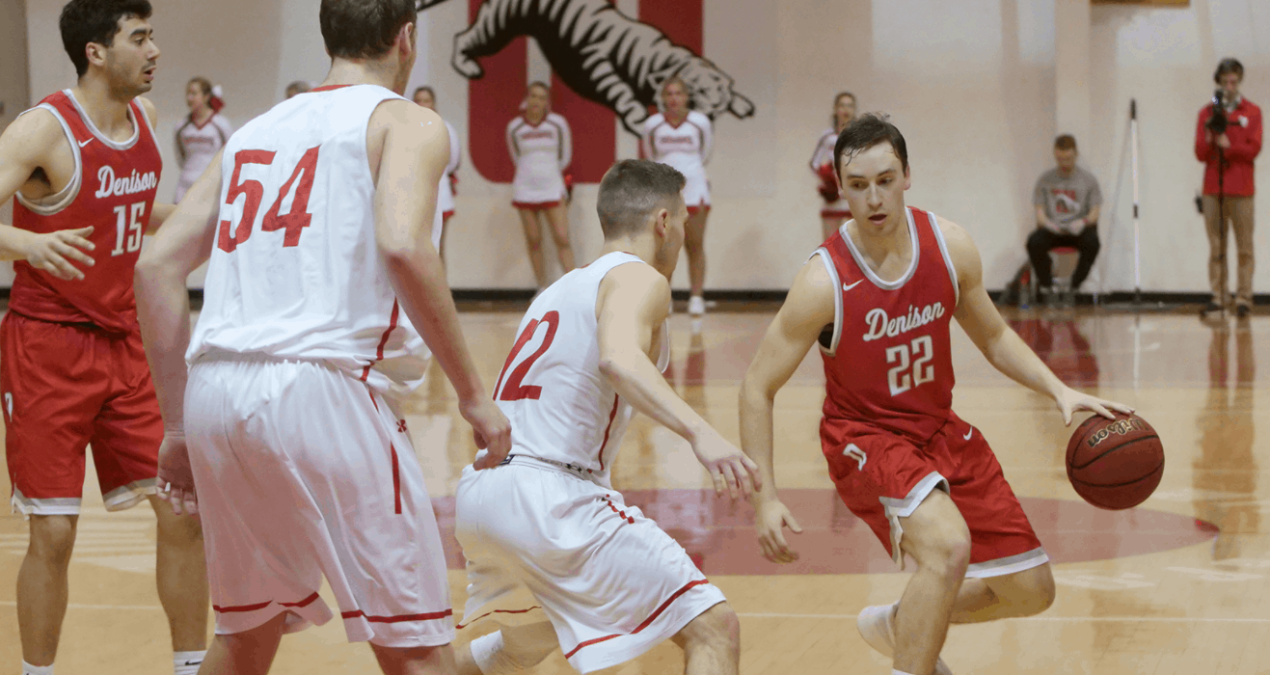 Not every season has a storybook ending.

But make no mistake, the Big Red were not far off from capturing their second NCAC Men’s Basketball Championship in three years before falling short in the semifinals to the Wittenberg Tigers for the second consecutive year.

In fact, after the first half on the road in a semifinal matchup against top-seeded Wittenberg, the Big Red found themselves trailing by just one point, 43-42. Heading into the locker room, they were faced with the challenge of knocking off the top team in their own building with a trip to the championship game on the line.

Unfortunately for Denison, however, they were unable to withstand the offensive barrage Wittenberg brought out of the locker room after halftime. After the Tigers opened up the second half with a 14-0 run, they blew the game open and took command en route to an impressive 97-73 victory over the Big Red.

When asked to reflect about some of the growing pains this year’s team experienced during the regular season, Head Coach Bob Ghiloni remarks, “We lost games that we should have won earlier in the year on the defensive end. Lack of real size hurt us against some opponents — especially Wittenberg — but all in all, we played our best basketball of the season down the stretch.”

But the Big Red were far from the only team who had difficulties matching up with Wittenberg’s impressive combination of size and perimeter prowess; the Tigers suffered just two blemishes during their quest to repeat as NCAC champions this season.

Despite the ups and downs, the Big Red found a way to come together and compete on the biggest and brightest stages. And perhaps even more importantly, this year’s team was a resilient bunch of young men hungry to improve both individually and as a team.

Ghiloni comments on a key turning point for his squad during the season. “In the middle of the year, veteran guys (and eventually the whole team) started holding one another much more accountable for their mistakes. We will have to carry that into next year from day one. It is not only best for the team, but also for all of us individually; we can learn so much from our own mistakes.”

Without a doubt, this group of departing seniors have left their mark on the Big Red basketball program. When asked about similarities between his last three teams, all of which have made deep playoff runs, Ghiloni is quick to credit this year’s group of seniors: “All three teams had very good senior leadership and this year’s senior class definitely had a large part to do with the success of all three teams,” he says.

It will be no easy task to replace three starters from this year’s team who have contributed to a large part of the team’s offense: Max Siwik ‘18, Garrett Collier ‘18, and Johnny Vernasco ‘18. Nonetheless, Ghiloni is confident in the depth of talented players returning next year, “especially Matt Doyle ‘19, along with those younger guys who have been waiting to get their chances,” he adds.

Even though all of the pieces didn’t quite fall into place at the right time this season, the Big Red have established a winning culture for years to come. And this certainly looks like a program destined to return back to the top spot in the conference in the coming seasons.