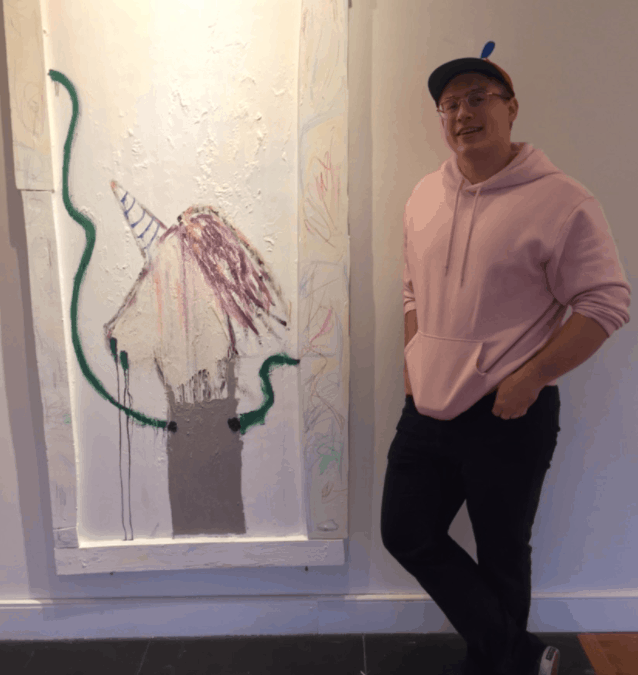 With second semester winding down, seniors are getting closer and closer to the finish line. As the year comes to a close, many senior art students are putting on exhibits and shows for the Denison community.

Elliot Avis, a senior studio art major with a minor in political science from Philadelphia, Pennsylvania has an exhibit titled PotZ PaintZ n Other Thingz that will be shown in the Mulberry Houses until April 6. This exhibit is his BFA show, which is similar to the BS for sciences, which requires a solo show and completion of a research paper.

Coming to Denison, Avis did not expect to become a studio art major, but it’s just something that ended up happening. His only experience prior to school was throwing clay on a traditional wheel, but it wasn’t until he took his first few art classes at Denison that he fell in love.

The title of his exhibit, PotZ PaintZ n Other Thingz is inspired by his experience working in a variety of mediums, evident through his displays and pieces.

He says his work deals with themes of escapism, absurdism and the different realities we, as humans, all try to escape to whether that’s through drugs, videogames, television or our phones.

Every piece he makes comes from a personal story of his own, or reference to something else. He then subtracts from these foundations to get the piece down to a more ambiguous, abstracted image that people can willingly create their own narratives for.

“I think my work is very reflective of our millennial generation. I think we are an especially nostalgic generation and that is why I use so many cartoon and videogame references in my work. We are also the first generation to grow up with screens around us all the time, and I think that has had massive sociological impacts on our lives and social development,” said Avis.

Although his work may stem from a dark place, he believes it to be fun and easy to approach with an added sense of humor.

His exhibit strays away from typical shows and instead incorporates fun, interactive ways of engagement with his work. He aimed to create a space where people could just hang out and enjoy art and all of its forms.

These were his motives for including a ball pit, food, drinks and a fun video played at the opening of his exhibit.

“I actually made the video. I put music and found footage from memes, cartoons, weird YouTube subcultures and video games in it. In essence, my work is weird, absurd and comes from a dark place, but has an optimistic humorous attitude to it,” said Avis.

Avis, along with many other seniors, will continue to have their work on display for the next couple of days. If you find yourself down on South quad, feel free to stop by his exhibit in Mulberry House.