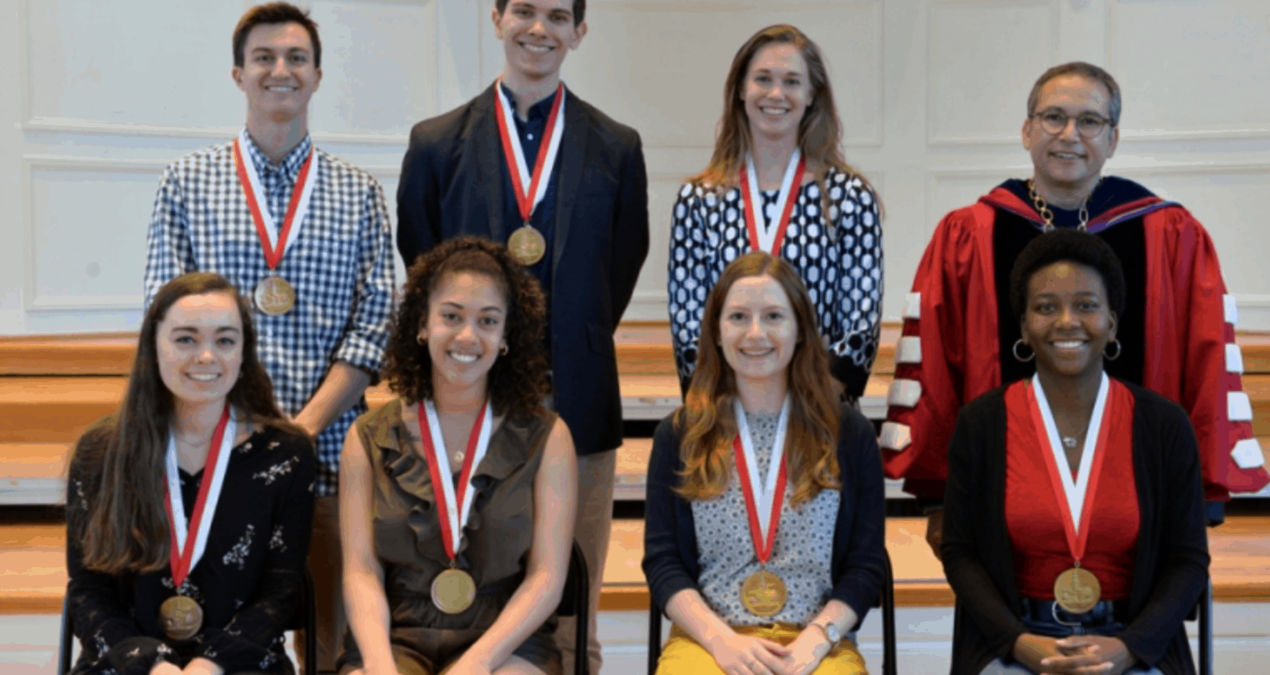 A cricket could be heard on Academic Quad as classes halted to celebrate Denison’s best and brightest students. With only a handful of people knowing who wins academic and teaching awards each year, students and faculty gathered in Swasey to have the secret revealed at the convocation.

This year’s Academic Award Convocation took place on Friday, April 20 and celebrated the achievements of Denison’s faculty and students. Both are eligible to win awards, including students who are not seniors.

The Charles A. Brickman Teaching Excellence Award is given each year to a faculty member who is a model of dedication to students and to student learning. Modern languages professor award Gary Baker was bestowed this award for teaching excellence.

The Bonar Family Mentoring and Teaching Excellence Award, which recognizes the significant mentoring and teaching ability of a Denison faculty member, was awarded to Associate Professor of English, Dr. Margot Singer.

The President’s Medal, created in 1985, are awarded to a handful of students each year that exemplify leadership ability and contribution to community discourse as well as demonstrated community service, contribution to the arts, enlargement of the community’s global perspective, athletic fitness and achievement.

Next, the Provost’s Academic Excellence award honors graduating seniors who have exhibited an extraordinary level of intellectual engagement and academic achievement during their time at Denison. The winners of this award have outstanding academic records, have engaged in independent research or creative work and have made contributed to intellectual life on and off campus. They have demonstrated outstanding performance in all their academic endeavors, truly exemplifying excellence in the liberal arts. Provost awardees:  Elizabeth Postema ‘18, Jane Bright ‘18, Patrick Banner ‘18 and Madeline Van Winkle ‘18.

The Distinguished Leadership Awards was given out to twenty-six graduating seniors from across the country and varying academic interests. The Distinguished Leadership Award Selection is based on demonstration of monumental leadership that responds to the University’s mission, effects significant and profound impact on students, campus organizations or the community, and in addition, has been sustained and shows progressive levels of responsibility and commitment, either within a single organization or through collaborative enterprise with others.

Denison students who have been awarded major prestigious national and international academic awards and scholarships also were announced. These scholarships, including Fulbright, Gilman, Rhodes and Cambridge, provide opportunities for Denison students and graduates to work and study abroad. These scholarships are awarded to various disciplines ranging from English to Geoscience and will take these graduating seniors everywhere from Taiwan to Germany. However, seniors are not the only ones awarded these scholarships. Read about the Fulbright awards at Denison in the article on page three. After another year at Denison, the school looks to produce more winners at each convocation.