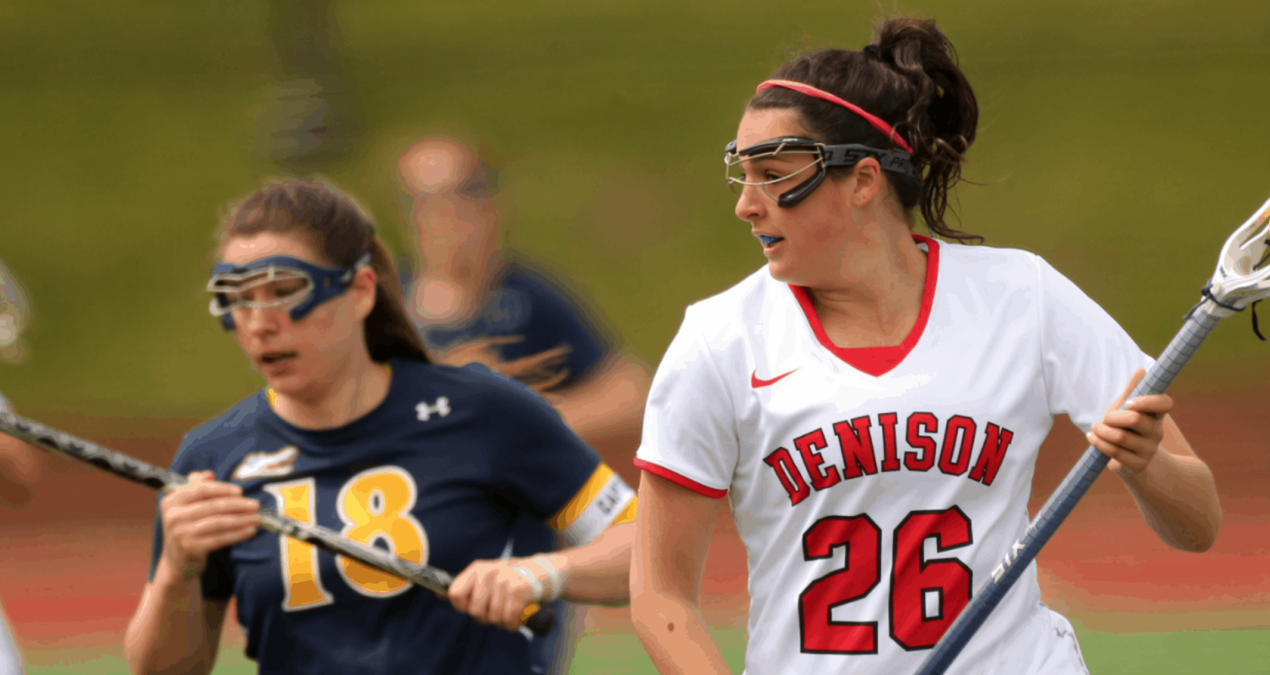 Denison’s Women’s Lacrosse team has been dominating the competition in the past couple weeks as they wrap up this impressive season.

Since last issue they travel to Northeast Ohio in order to take on John Carroll. The game had a quick start, with Denison putting up 9 goals. The first three were scored by Kiely Noonan ‘20, the next three by Leah Israel ‘18, and the final two being made by Claudia Rafi ‘18. Other goals throughout the game were made by Liza Farnham ‘21, Lindsey Karsh ‘21, Virginia Hamilton ‘19, Maddy Heher ‘19, and Hope Adams ‘21.

The defense also put up a strong fight, with Jane Goodspeed ‘20 leading the way with 6 ground balls, and Hannah Magarian ‘19 starting in goal. Overall Denison claimed a win of 14-8 over the Blue Streaks of John Carroll.

Next up for Big Red was their Saturday, April 21 game against Hiram. Even though Hiram appeared to come out strong, putting in a goal in 12 seconds into the game, Denison was quick to respond. The offense took off, scoring 11 goals within the first ten minutes of the game. Israel and Rafi each had a hat-trick within the first seven minutes of play, and come halftime Lee Hayman ‘20 and Noonan were in the same boat. The game finished with a final score of 26-2, continuing the winning streak for Women’s Lacrosse.

On Wednesday, April 25, the team claimed their 10 consecutive win over DePauw, shutting them out with a score of 23-0. This improved the team’s record to 13-2 overall, and 7-0 in North Coast Athletic Conference play.

Denison was able to quickly jump on the opposing team, scoring 3 goals within the first three minutes of play. They were scored by Noonan, Heher, and Farnham. By halftime, Denison led DePauw 13-0 and did not plan on slowing down. With more goals being scored by Halle Walsh ‘18, Ally Zimmer ‘21, Colleen Muldoon ‘20, Emerson Younger ‘21, Camille Concannon ‘21, Israel, Fischer and Adams, Denison claimed victory with their first shutout win since April 15, 2017, when they defeated Hiram College 22-0.

Grace Tully ‘21 environmental studies major, felt good about the win this past Wednesday, and still sees ways in which the team can perform even better in the games to come. “We killed it on ground balls and draw controls, as well as forced turnovers on the ride, but obviously there are still things we need to work on. Playing teams like that can easily lead us to creating bad habits and we were definitely forcing feeds and shots that would be turnovers in any other game. I was really impressed with the other team though, they fought hard to the last second,” she said.

The women stayed hot on Saturday, topping Hiram 17-6. It was Noonan leading the way for the Big Red. She finished with six goals.

With the days flying by, Catie Mulligan ‘20 H.E.S.S. major looks back on the season thus far with pride. “The season has been going well overall. We have gotten the chance to play a lot of good teams out of our conference which gets us ready for the NCAA. This year the team has the potential to do really well in all competitions which keeps us motivated to work hard.”

Denison can expect to see big things from the Women’s Lacrosse team as they continue to work towards the NCAA, and finish out the season strong.

Denison Field Hockey is Ready to Play, and Win