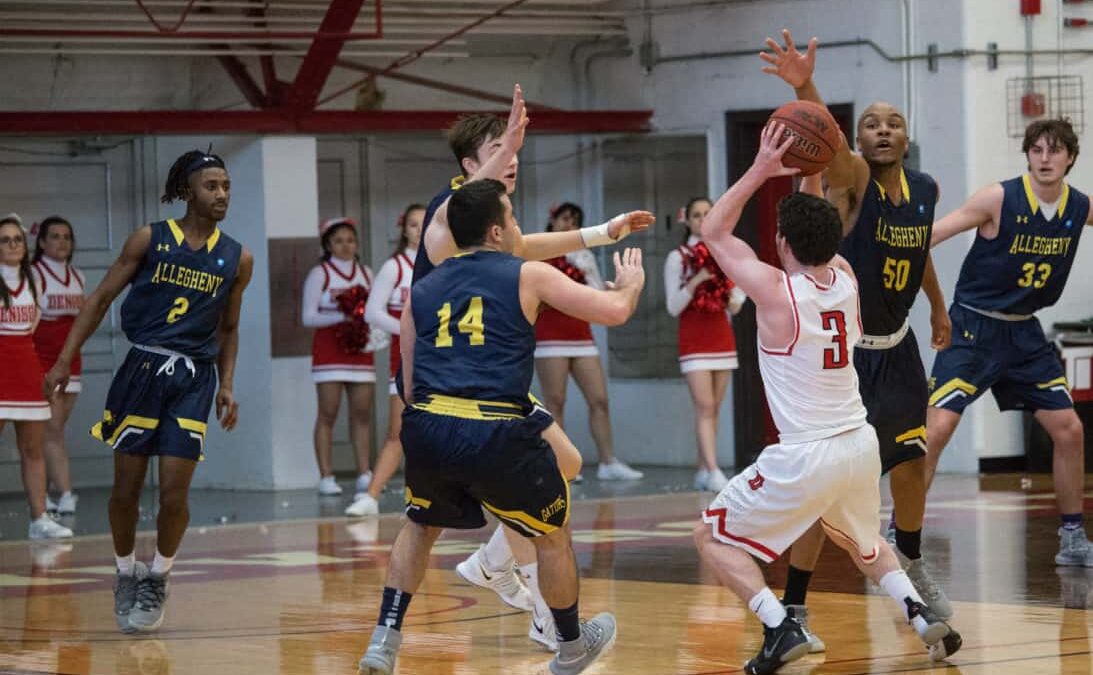 On February 6, the Big Red took on the ninth-ranked team in Division III, the Wooster Fighting Scots. Despite a stellar first-half performance that earned them a 34-29 lead, Denison couldn’t quite keep up the same energy for the full forty minutes.

Forward Matt Doyle ‘19 led the Big Red offensively shooting 7-15 from the field for 14 points, and added eight rebounds and three steals on the night.

Though the Big Red had a greater field goal percentage than the Fighting Scots (45.0% compared to 44.1%), they lost the turnover battle (19 to Wooster’s 11) and paid the price.

Wooster’s scoring output largely came from the hands of their starting backcourt. Potential All-American guard Danyon Hempy ‘20 and guard Reece Dupler ‘19 combined for a total of 50 points out of their team’s 73 points against the Big Red.

Hempy’s scoring outburst was nothing new for the junior, who is averaging the second-most points in the North Coast Athletic Conference (NCAC) at 20.2 points per game.

Both Hempy and Dupler performed well for the Fighting Scots during both halves, and especially during the second half to bring them back and ultimately top the Big Red by a final score of 73-63.

Junior guard, Jack Coulter, reflects on the kinds of takeaways he and his team make after a battle with one of Division III’s top teams. “We’ve shown time and time again that we can compete with the top teams in the nation we just have to learn how to better close games and take care of business. We have a lot of talent in our group and we know the program will only get better from here,” Coulter said.

Jake Livingston ‘21 was a major reason as to why the Big Red was able to pull ahead early against the ninth-ranked Fighting Scots. The sophomore center finished the game with 11 points on 5-10 shooting from the field to go along with five rebounds, two of which were offensive.

A major component to the Big Red’s offense is their accuracy and execution from three-point land, and they have struggled all year to find consistent offense when they’re not shooting the ball well from outside.

Following the tough Wooster loss on Wednesday, the Big Red were home again on Saturday against the Allegheny Gators.

Forward Jordan Rawls ‘20 of the Gators led the game with an incredible 42-point performance on 15-27 shooting from the field (5-10 from three-point-range) and added 14 rebounds. Freshman Brian Roberts, Jr.’s had quite the day himself for the Gators and added 20 points to their scoring total.

It’s not the first time this season that the Big Red have been on the receiving end of such a performance, as the team has had a tough time slowing down opposing first options.

Despite Coulter’s 23 points for the Big Red, the Gators were able to maintain their lead and achieve a relatively stress-free win of 90-75 over the Big Red.

Coulter deflected the spotlight to his teammates when asked about his strong offensive performance that included an impressive 7-10 on three-point field goals. “I was definitely feeling good but all the individual success can be related back to my teammates. They set some unreal screens for me and our offense was flowing pretty well which made my job really easy,” he said.

Saturday’s loss made it four in a row for Denison. With just two games left on the season, the Big Red are currently sitting at a record of 6-16 (3-13 NCAC), and will be looking to finish the season on a high note this week.

They will be in action on the road for the final time twice this week, first on Wednesday, February 13 at DePauw, and then for the last game of the season on Saturday, February 16 at Ohio Wesleyan.