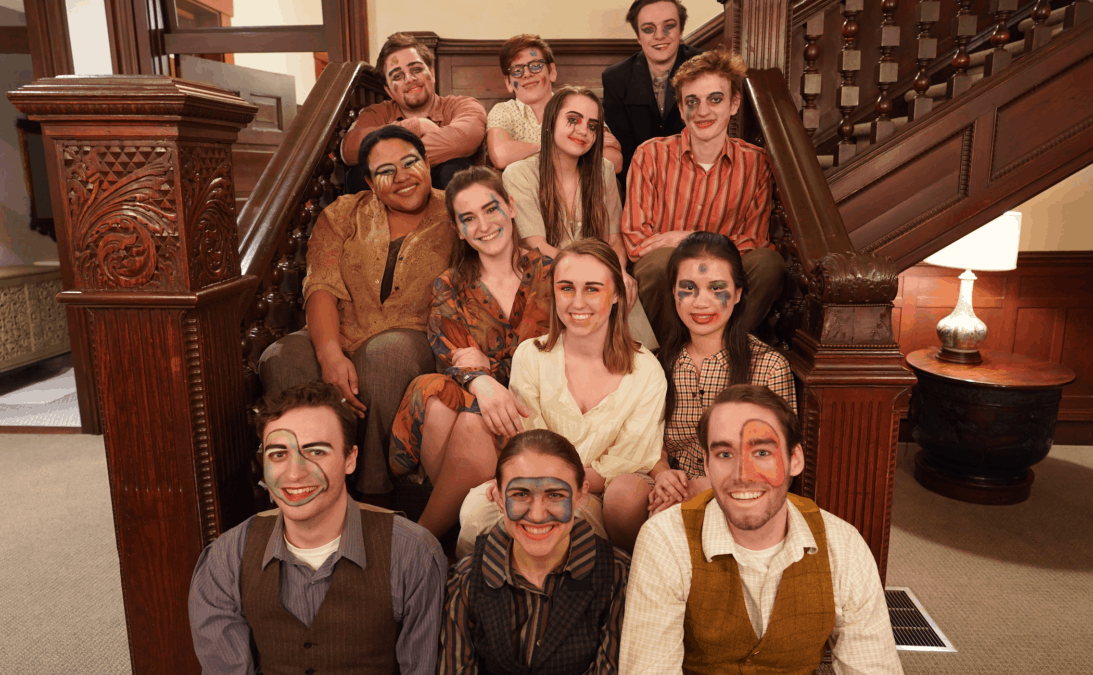 Information for Foreigners, directed by Eleni Papaleonardos, is the third performance of the Denison University Theater’s 88th season where one has to remain on their toes even though watching this performance passively is likely an impossibility.

The play explores themes of random punishment and citizens unwillingness to accept or intervene. The performance opened last weekend meeting sold out nights and astonished audience members at the complexity and amazement of the performance and a bit of bewilderment.

Griselda Gambaro wrote Information for Foreigners in 1971. A prolific Argentinian writer, she was born on July 24, 1928. Many of her works focused on her concern for politics and the development of a dirty war within her home country. Information for Foreigners is a stage-specific piece where the audience is introduced to 20 different shuffling scenes and are led through each one by guide characters.

The cast will perform their act 3 times a night for the duration of the play, which is a difficult task in such a chaotic performance full of movement.

Information for Foreigners is akin to three plays in one, but all at the same time, yet for the audience at different times. It is a play practically beyond words. It is truly a play that one wants to see again with its many different elements that all move together, and how the performance is a different experience for every audience member.

Adam Frost-Venrick ‘21 a theater and cinema double major from Upper Arlington, Ohio, and an actor in the Theatre Department’s rendition of Information for Foreigners, spoke about the play. “It’s dark and it’s complicated and it’s real, in its own way. And pieces like this are why I got into acting. I think that it’s a dark mirror to society, even today.”

“I would say that it’s a very unique experience for two primary reasons. Firstly, Information for Foreigners is commonly referred to as being “unproducible.” It’s almost impossible to find an empty house with the number of floors, rooms, or staircases to physically put on the play and the sheer manpower required for Information for Foreigners is insane. Secondly, it’s such an inherently political piece of theatre. The author does a masterful job at creating an environment within the context of the show that mirrors the culture of insecurity, danger, and threats that were present in Argentina during the sixties and seventies.”

She also describes the performance as “a Frankenstein’s monster of performance art. Every aspect of the text, production, and performance of the piece have combined to create this grotesque, pulsing entity which is Information for Foreigners. It’s so alive and tells such a gut-wrenching story that it’s impossible not to interact with it.”

Frost-Venrick said that, as an actor, the play was certainly an experience. “This performance was an experience unlike any other I’ve had as an actor. Everyone always talks about how close they get with other members of an ensemble, but here it was really true. There was an immense amount of required trust and required empathy for each other. And a kind of shared enthusiasm.”

Information for Foreigners does contain strong and graphic themes, which may not be suitable for all audiences, and there are ushers available that allow audience members to leave the performance if they find the content on display too disturbing.

Those who see Information for Foreigners will not be forgetting it anytime soon.

The experience requires reservations, which can be purchased by calling the Box Office at 740-587-6544 or on Eventbrite. The audience meets in the Ace Morgan Lobby before entering the house for the performance. Tickets are free for students and faculty of Denison University.