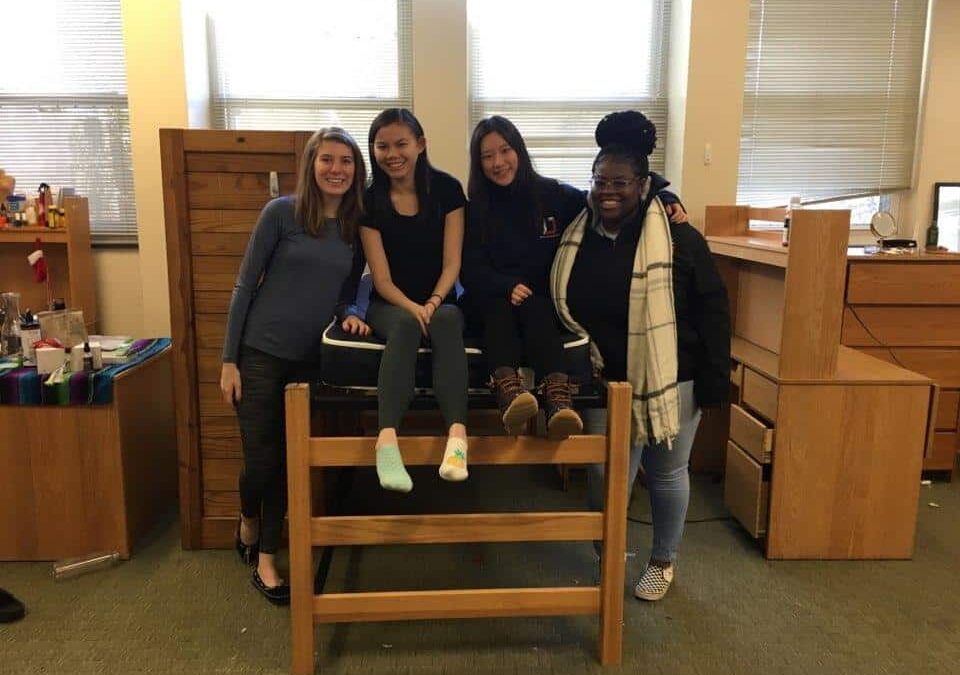 JAEEUN LEE, SARAH VOLZ, SOPHIE GILSON & MADJEENA PHILIPPE — Whether you request a roommate, or go with random assignment, it’s probably safe to say that feelings run high when you receive that fateful email: who is your first year roommate. It’s a gateway to decor discussions, getting-to-know-you chitchat, and much more…especially when you have not one roommate, but four!

Jae: When I was first assigned my room via email last August, I felt somewhat unusual and foresaw that my first year would be tough and adventurous in many ways! This was because I was assigned Five Person Multiple Room in a dorm called Shorney. I was not aware that our room was a common room originally and was converted to a living room a few years ago. However, I was also excited to have four roommates in my first year in college.

Sarah: Before I was given my room assignment, I didn’t think a five-person room even existed on a small campus like Denison’s. When I discovered I would be sharing my first ever dorm room with not one, not two, not even three, but four people, I was really nervous.

Sophie: I was not nearly as positive when I first saw that email; in fact, I think it’d be safe to say I lost my mind. I’m pretty sure I started crying about how “I just wanted a normal college experience” in front of my computer before I realized my own ridiculousness and pulled myself together.

Madjeena: Initially after hearing the news, I wanted to request a different room because I’m more of an introvert so going from thinking I would have one roommate to realizing I would have four to say the least wasn’t the most exciting way to start my new college experience. Instead on dwelling on things I could not change, I decided to make the best of the situation.

Sarah: Our room is one large room that can supposedly “accommodate six people” but in reality is a common-room turned dorm room. Then, of course, there’s the closet-envy of doubles and triples that have built-in closets and storage space while we’re stuck with wardrobes a third of the size and storage space that only the underneath of our beds can give us.

Sophie: It sort of looked like the prison cells in old fashioned movies where you have to look up to find the natural sunlight. A stellar first impression if there ever was one!

Jae: After we went through the first difficulties in our room — Sophie’s dad lofted our beds, moved wardrobes, and gave ideas about arrangement — it seemed possible to live with four people in this setup. I reminded myself of advantages that others would not get from their rooms and roommates. I would not be so lonely but I also would never get a worse room in my entire life.

Madjeena: It took me a while to adjust to the living situation. I learned and still learning to be respectful of my roommates, and not be negative about problems that aren’t so serious.

Jae: The point where we began to know more about others was after Thanksgiving break. One day, Sarah pulled out ‘Hallelujah’ by Pentatonix. After Sarah turned on her favorite song, we began to sing and escaped from reality. We always turn on the song ‘Hallelujah’ whenever we are sick of studying and want to have some rest.

Sophie: Jae and I were constantly singing the Hallelujah Chorus because Concert Choir was putting on Handel’s Messiah…one of us would start humming a line and the other would pick it up until we were both singing it! Since the holidays, we’ve definitely become more social with each other while in the room. Having people to talk to is (or should be) one of the perks of living with this many people.

Letter to the Editor: Saving electricity