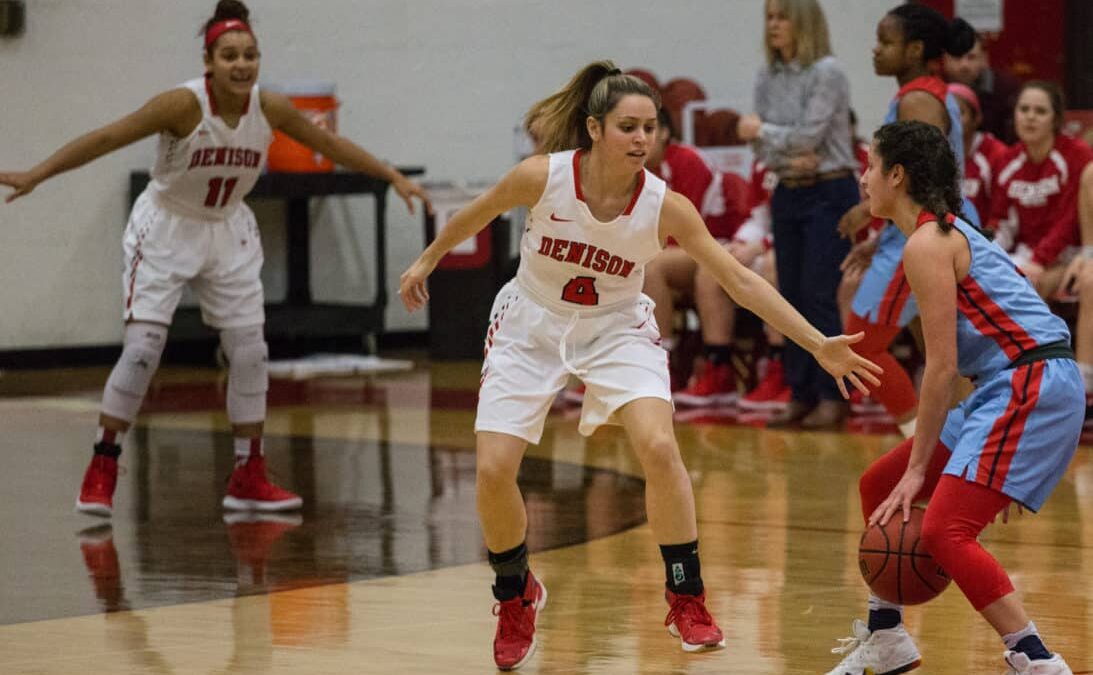 ETHAN HORGAN — You can’t win them all, although Denison women’s basketball came close when the calendar flipped to 2019.

On February 23, the Big Red took on the DePauw Tigers for this year’s NCAC Championship game after beating Hiram  College and Ohio Wesleyan University in the tournament first two rounds of the NCAC Tournament. They blew out Hiram with a monstrous 82-53 win at home against the Terriers in what was the team’s final home game of the season.

The Big Red also exerted their dominance against Ohio Wesleyan with a 68-59 win to earn themselves a spot in the championship game against DePauw.

The champion matchup marked the third time the Big Red would square off against the top-seeded Tigers on the season.

In the previous two games, Denison fell 78-29 at home and 58-50 on the road. Remarkably, these two losses were the only two games the Big Red dropped after December 20.

Denison had won 14 of their final 16 games with a record of 18-8 (12-3 NCAC) entering the third and final matchup against the Tigers on Saturday.

The Tigers, meanwhile, carried an 8-game winning streak and a gaudy record of 23-4 (14-1 NCAC) into the championship game.

Despite a monstrous 20 point second quarter, the Big Red were unable to have that same energy throughout the other three quarters of play, ultimately losing 50-61.

Forward Lauren Hofer ‘20 led the Big Red offensively with 15 points to go along with an additional 2 rebounds and 2 steals.

In addition, Lauren Longbrake ‘20 contributed 15 points to the Big Red’s scoring total, along with 9 rebounds, 1 assist, 1 steal, and 1 block.

Despite Hofer and Longbrake’s offensive contributions of a combined 30 points, they were outscored by forward Haley Cange, forward Claire Keefe and guard Maya Howard for Depauw, who combined for 37 points against the Big Red.

Even with a low field goal percentage, the Big Red capitalized from their reserve players, as half of their points came from the bench.

The Big Red was also able to take advantage of DePauw’s mistakes, as the Big Red scored 14 points off of 15 Depauw turnovers.

Ultimately, the Big Red’s inability to shoot consistently from the field throughout all four quarters proved to be their downfall against the Tigers.

This Saturday’s loss to DePauw University marks their third loss to the Tigers this year, making it 0-3 against the top ranked Tigers.

Freshman forward, Kennedy Bayer ‘22, reflects on the season the Big Red had this year and their feelings toward the end of their season.

“As the season progressed, not only did we become closer as a team, but we became more of a family. Although we didn’t bring back the championship, we can definitely be proud of how the season ended and how we played hard against DePauw.”

The Big Red finished 12-4 in their conference while winning 14 of their last 17 games of the season.

Though failing to bring the championship back to Denison, the Big Red closed out their season with an impressive 18-9 record.