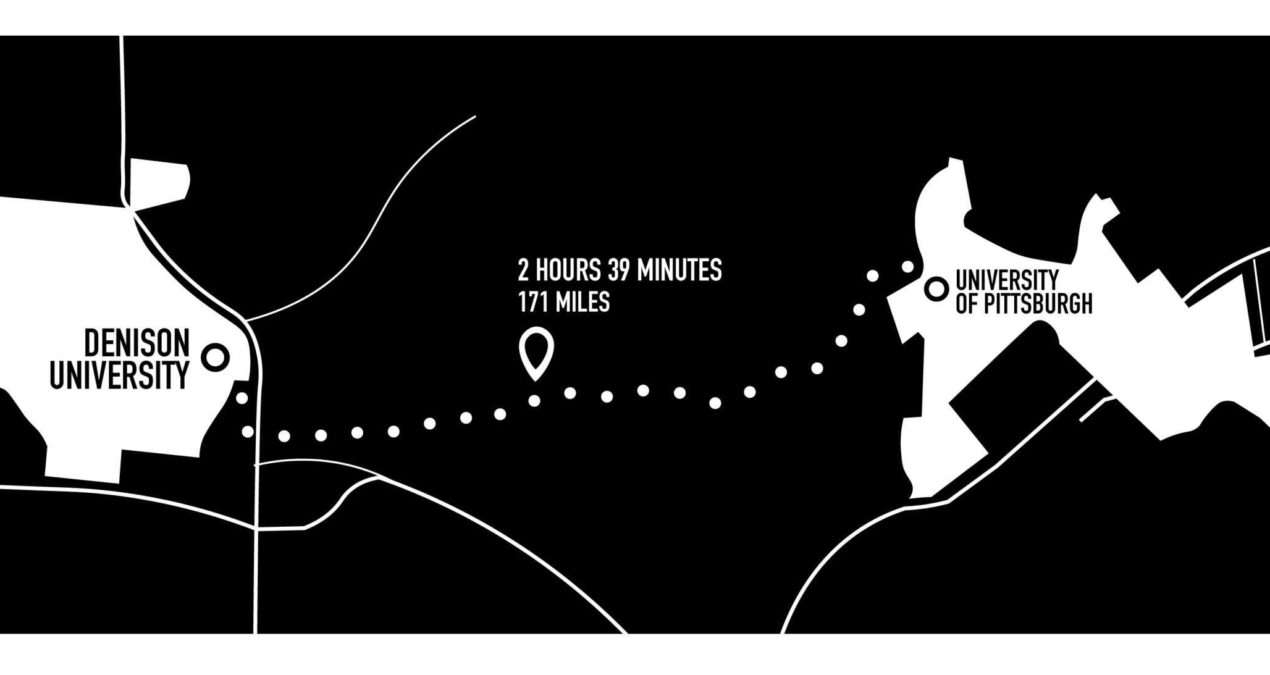 Update as of 6/10/19: The public still remains unclear about the repercussions of the event for students involved, but according to an anonymous source, two students have been expelled who were directly involved with the incident at hand and other expulsions are being processed.

LIZ ANASTASIADIS, Managing Editor — On April 11, Pittsburgh Police interviewed four Denison students in Ohio regarding “a suspicious incident that occurred at 2:30 a.m. on April 9. During the incident that occurred at the intersection of 5th and Ruskin Avenues, two males exited a vehicle and appeared to run after a female student. Nothing was said during the incident and no one was injured.”

All four have been banned from University of Pittsburgh property since the issue, and have been referred to Denison University academic board for further disciplinary action.

In the statement from Pitt Police, they concluded: “As a result of those interviews, it has been confirmed that they were participating in a Pittsburgh specific scavenger hunt sponsored by an informal group on their campus. One of the tasks of the hunt was to ‘scare someone.’ Other tasks included visiting Pittsburgh sports venues, taking selfies at various bridges and publicly insulting prominent Pittsburgh sports figures.”

The “informal group,” also referred to as an “underground organization” is a group that is not affiliated with a national organization or the university officially. Therefore, they don’t adhere to any rules or regulations and aren’t moderated by university standards closely. The tasks listed above were instructed by the leaders of this underground organization, upperclassmen, to have these first-year “pledge” students perform these tasks in order to gain membership to their group.

The students involved are wrongly associating themselves with an organization previously known on Denison’s campus as Sigma Phi Epsilon (SigEp) Ohio Tau chapter.

“Sigma Phi Epsilon has not had a chapter at Denison University since 2013, so to be clear, these students are not members of SigEp,” said Heather Kirk, Chief Communication Officer of Sigma Phi Epsilon national fraternity in an interview. “Groups that are not affiliated with a national organization or the university often bring heightened risk because they lack valuable resources, education and accountability to standards that organizations and campuses provide.”

According to the Denison University official website, the Ohio Tau Chapter was suspended “as a result of the recent finding regarding hazing and growing risk management concerns, conduct history and inability to more significantly improve its behavior.”

“After the end of the academic year in 2018, Denison University will be prepared to discuss with Sigma Phi Epsilon Fraternity possible recolonization at Denison, should student interest in the fraternity prompt such conversation,” also quoted the website. We are now working in partnership with university administration to determine if an unrecognized group is operating under our name and if this is the case, to address the situation,” said Kirk.

On the website, it also lists other previous Greek organizations that have been disestablished in the past, including “KZ” (a group that separated from the active chapter of Kappa Sigma fraternity) and “Phi Gamma Delta (FIJI).”

With the recent leave of Aimee Masko, former Associate Director of Campus Leadership and Involvement and advisor to all four Greek councils, the discussion of who in the administration is directly handling this situation is under question.

In one article titled “Fraternity investigations conclude with three different results” published in July 2013 written by former The Denisonian News Editor, Kristóf Oltvai ’15, it quoted Maczko on the subject:

“‘Underground groupings of individuals,’ said Maczko, ‘are a continued concern on this campus. We have some groupings of students that collect themselves under certain names…and without the oversight of the Campus Leadership and Involvement Center, without them having a constitution or bylaws, without them having to follow basic rules, it’s extremely difficult. So we continue to have issue,’ she continues, ‘with groups of individual students that assemble outside the context of an organization and do things that are not appropriate.’”

During an interview with Janine Faust, a rising senior at Pitt and Pitt News Editor-in-chief, she described the University of Pittsburgh campus climate following the incident:

“There was a lot of fear. Women were telling each other not to walk alone. There was a lot of speculation about what was going on and how this could happen [at Pitt]. Nothing like this has really happened here before. Everyone on campus was very paranoid and tense. I wasn’t even comfortable walking back to my apartment [at night] afterward, which was only two blocks away from the Pitt News office. I didn’t want to risk it. The culture of paranoia continued for the next few days — there was a student living on Atwood street who claimed that she had heard a woman shouting nearby and that she saw a car driving away. She assumed that something similar had happened again. It turned out as a false accusation after the police checked security tapes. People were so worked up that they imagined stuff like this happening again. Also, there was an unrelated armed threat where there was a man trying to get into an apartment on Parkview avenue with a gun on the morning of April 11. All of this contributed to the feelings of fear on campus.”

The newspaper wrote an editorial titled “Denison scavenger hunt wasn’t funny” regarding the incident, published on April 14. It read:

“The Denison students’ ignorance of the fear many women carry with them wherever they go — whether it was willful ignorance or the result of never having to empathize with another’s position — had huge repercussions across campus.”

However, these issues of safety and fear are not gender specific.

“It wasn’t only girls who were afraid, but guys as well. My guy friend didn’t want to walk back by himself and insisted on a carpool dropping friends off along the way. He didn’t want anyone to be in danger, including himself,” recalled Faust.

Other students at Pitt reacted to the event on several different social media platforms, expressing anger and their concern for their safety.

User yukidavijii commented on the University of Pittsburgh Student Body Reddit thread regarding the incident:

“What the heck is wrong with them? Thinking that’s the way to scare someone … Send a ton of people into a panic and get the cops involved. I hope they get expelled.”

User foreignfishes also commented: “I hope [the police] publish their full names so that when they interview for jobs, this comes up. How can you possibly do this [expletive] and think it’s not only okay but fun?”

Denison students also express their concerns regarding their safety due to the threat of underground organizations.

“Honestly, it’s been scary,” says Michaela Allen ‘19, a psychology and communication double major from Delaware, Ohio. “Knowing that on a small campus like Denison, there are men that are capable and willing to harm women, whether that be emotional or physical … We have training and opportunities to learn about these types of issues, to prepare ourselves, but you’d never think that people within reach are capable.”

Allen also wrote a response article on HerCampus, an online all-women writing club on campus, titled: “The Pittsburgh Scavenger Hunt: My fears as a woman” regarding a woman’s perspective on the incident.

This is not only an issue of safety but according to some, the incident can also start conversations regarding sexual respect.

“With underground fraternities, it’s really hard [to regulate them] because without having anyone that they have to answer to they can do whatever they want,” says Elena Meth ‘19, the president of both The Denison Coalition for Sexual Respect (DCSR) and Sexual Harassment & Assault Resources & Education (SHARE). “That’s not to say that everyone who is in an underground fraternity is actively disrespectful or harmful … Every established Greek organization on campus went through bystander intervention and sexual assault training this semester, but this doesn’t reach the underground fraternities because we have no way to get to them and to make sure all their members are going through it. It’s not just an issue of sexual respect, but they don’t have to talk about racial or ethnic bias or diversity in their groups, they don’t have to talk about how they can be active members of the campus and help out the people around them in general. It’s a really weird system that exists but its not a Denison specific problem.”

Dr. Laurel Kennedy, Vice President for Student Development, sent out an email to the Denison University student body with the subject “Living Our Values” on April 17:

“We are deeply disappointed and embarrassed that Denisonians engaged in such behavior … We cannot let the actions of a few diminish our university, nor do we want them to cast a shadow on the character of our students who have shown, especially through this last difficult year, such constant kindness and empathy.”

Regarding the status of the students involved in the incident, Denison administrators haven’t officially stated the ramifications of these actions to the student body out of respect for the students’ privacy.

Denison University communications will be publishing a press release stating official disciplinary action toward the students involved. Currently, this statement has not yet been officially released.