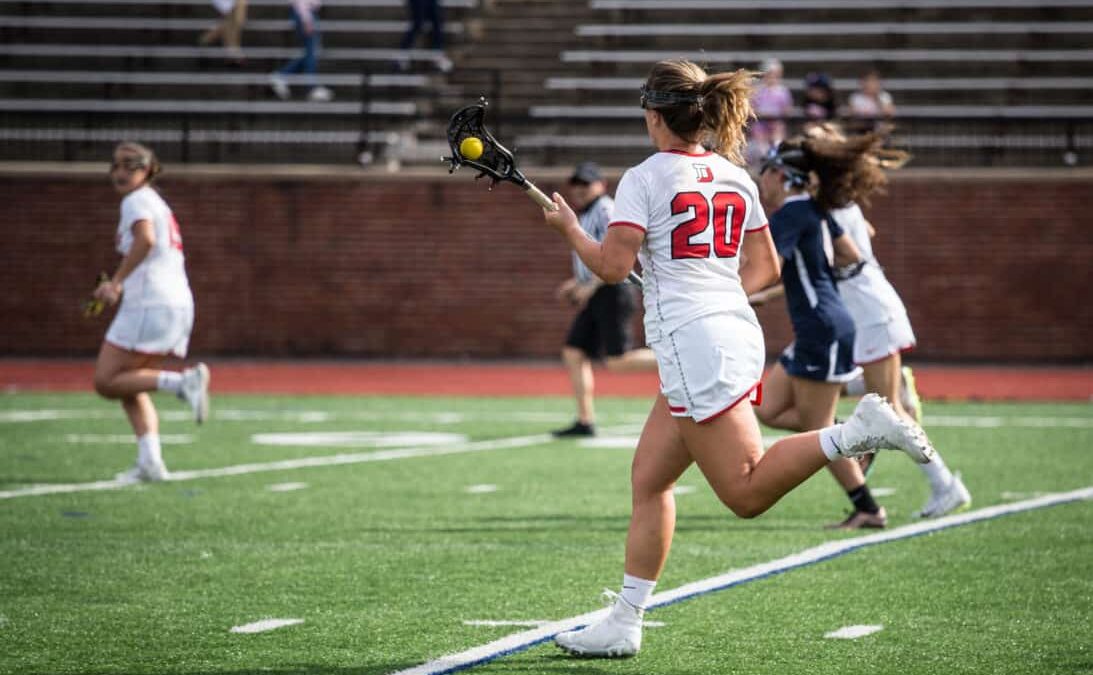 KATIE KERRIGAN — It was a busy and successful week for Big Red women’s lacrosse.

The defense was helped by sophomore Megan Cunningham, who caused three turnovers and three ground balls. Senior goalie Hannah Magarian was an all-star on the defensive side with eight saves for the Big Red. Senior Jane Goodspeed caused five turnovers and swept up six ground balls.

After heading into halftime with a solid 8-5 lead, the Big Red came out firing in the second half. They used a 5-0 run in the first four minutes of the half to open the game up and would cruise to a convincing 17-8 win.

The Big Red dominated against the Hiram Terriers from start to finish on Saturday, April 6.

All three Big Red goalies, Magarian, Maeve Caldwell ‘22 and Sabrina Rice ‘22, combined to deny the Terriers from scoring any goals.

McTague had yet another high-scoring game, this time with four goals. She added three draw controls to the game and commented on the team’s ability to avoid playing down to lower-level competition.

“Even though it wasn’t the toughest competition I think that we did a really good job of maintaining our competitive level of play and working with each other!”

During the first 11 minutes of play, the Big Red ladies took a 10-0 lead and with that energy, they controlled the rest of the game.

On Sunday, April 7, The Big Red headed to Meadville, Pennsylvania to face-off against the Allegheny Gators to wrap up their busy week.

Another shutout game for Denison: they held the Gators at zero goals while scoring 20 of their own.

Senior Maddy Heher scored three of Denison’s first nine goals, which were all came during the game’s first 12 minutes. During this same beginning stretch, McTague and Hope Adams ‘21 scored two goals each, and they later each scored once more, finishing the game with three goals each.

Adams reflects on possible room for improvement for the team, despite the dominating weekend performances. “There are always things we can work on as a team like limiting the number of turnovers in the transition and maintaining a better shooting percentage, but we are looking forward to Wednesday against Wooster because they always bring a high level of competition,” Adams said.

Sophomores Molly Fischer and Lindsey Karsh scored two goals each during the second half. Karsh and junior, Paris Healey, gathered four ground balls each. This win gave Denison their fourth North Coast Athletic Conference (NCAC) win for the 2019 season to improve to an overall record of 8-3 (4-0 NCAC).

Liza Farnham, a sophomore attacker, says the team is attempting to go undefeated in the conference again and it is very confident that it is a goal within their sites once again. Farnham thinks one of the team’s biggest strengths is their skilled defense and that they have “a deep bench with people who are very good and capable.” Looking ahead toward the end of the regular season, Farnham predicts that the Big Red’s toughest game will be against York College on April 24. Currently ranked #6 in Division III, York has been a fixture in the top-10 all season long.

On Wednesday, April 10, they will travel to Wooster, Ohio to play Wooster in hopes of maintaining their undefeated conference record.

The team will also look to maintain their rapidly-growing North Coast Athletic Conference win streak, which is currently at 33 games, dating all the way back to April 11, 2015.