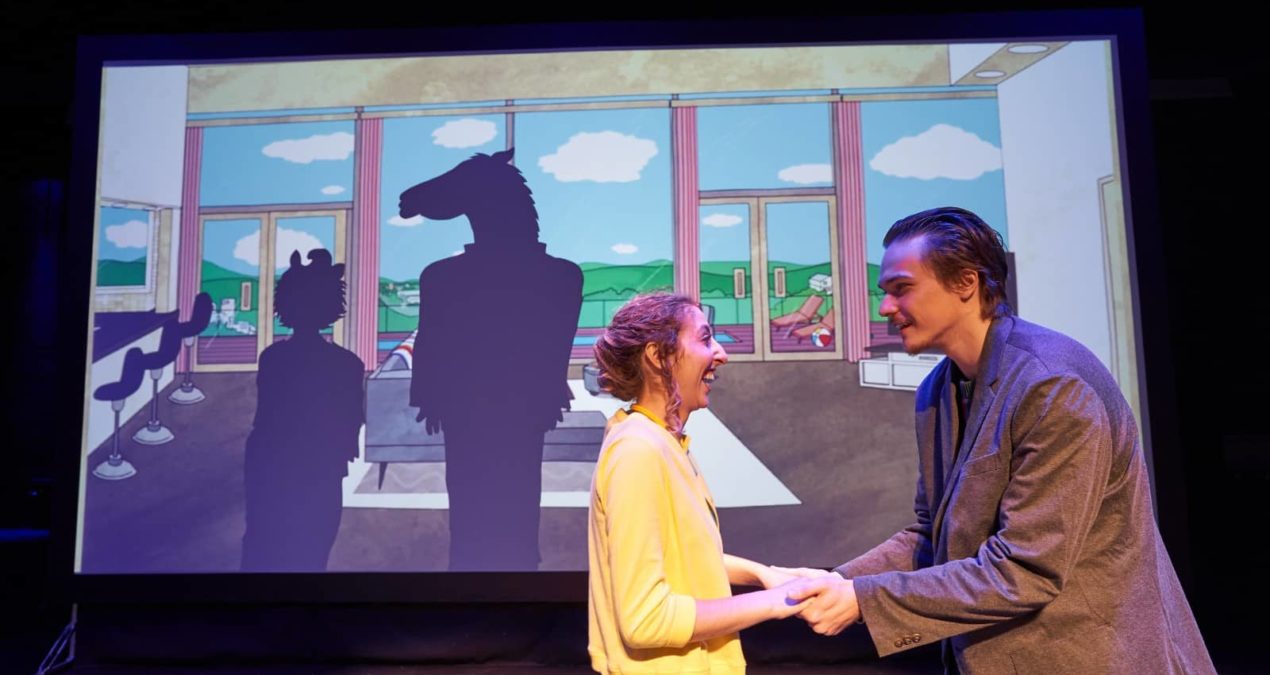 Bojack Horseman graces the stage for the first time

LAURA LAPHAM, Arts & Life Editor—For the 89th season of the Denison University Theater and the 1st performance in the new Eisner center, the production is not your typical performance.

The Denison Department Theater is running their first show in the new Michael D. Eisner for the Performing Arts this fall. The Bojack Horseman the theatrical performance. This show centers around the washed up celebrity, and his life choices.

The performance focuses on the episode “The Best Thing That Ever Happened” by Katy Purdy produced by Michael Eisner Productions and the Tornante Company. This performance is in honor of Micheal D. Eisner.
Bojack Horseman, a horseman and resident of Hollywood. The show follows the life of the cynical celeb, Bojack Horseman, and his self-destructive behaviors and life. The show is a Netflix favorite and is very popular.

The theatrical performance follows an episode of the Bojack Horseman Netflix show making it a short theater performance of only 40 minutes including an opening introducing the show. The show follows a night out for dinner between Bojack Horseman and Princess Carolyn and the emotions that they express and the hijinks that ensue.

The cast of the show consists of Aidan Iannariono as Bojack Horseman, Jordan Zelvin as Princess Carolyn, Talia Zeiger as The Business Donkey, Gwenyth Cain as The Young Donkey, Cameron Williamson as The Barfly Possum, Lily LeVanis as The Critic Earthworm, Madison Gordon as the Lady in the stall, Elliot Hornville as Sandro, Adam Frost-Venrick as The Waiter, Madison Gordon as the Velvet, Destiny Mack as the Presenter, Jacob Gunther as Bojack’s Shadow, Margaret Melich as Princess Carolyn’s shadow, William Main as The Business Donkey’s Shadow, Jon Powell as the Young Donkey’s shadow, Ali Nauen as the Barfly’s shadow, Zach Demet as the Critic’s Shadow, and Elliot Hornville as the Valet’s shadow.

The performance in a unique one for the performer and the audience. Adam Frost-Venrick ‘21, a theater major and an anthropology sociology minor from Columbus Ohio, said,”This performance was an absolutely fantastic experience. It gave me an appreciation for being part of a team. It made me feel like I was part of something bigger because we are working in this wonderful legacy. It is not like we are eating the whole cake, but just a part. Bojack horseman is a temembalsy important show for ne. This episode is important to me. If has helped me to better realize myself as a performer and as a person” Elliot Hoinville ‘21 described the experience as “alot of fun with a chill group of performs through making this show we have gotten close in as way that I hope is viable of stage.”

The performance was also a wonderful experience for the audience Micheal D. Eisner himself had to say kind words about the performance. “Very good. It is very hard to adapt a television show to the stage, so they did a great job.” The show was a unique experience as an animated series episode put on stage as a performance. Other people who worked on the performance found it unique as well. Camron Alten-Dunkle ‘21, a history and psychology double major from Columbus, Ohio, had something to say about working backstage on Bojack. “It was challenging to put on this play as the very first main stage show in the Eisner Center. We had to negotiate our yet incomplete understanding of the new space with the show’s very specific technical needs. Everyone on and off stage worked exceptionally hard to make it happen.”

Bojack Horseman is a unique experience for the audience as an animated episode of a netflix show put the stage in theater. The unique way of portraying the characters is fascinating and a wonderful experience. The last performance is On the 16th at 8:00, so if you are still interested in seeing Bojack Horseman on stage, now is your chance.