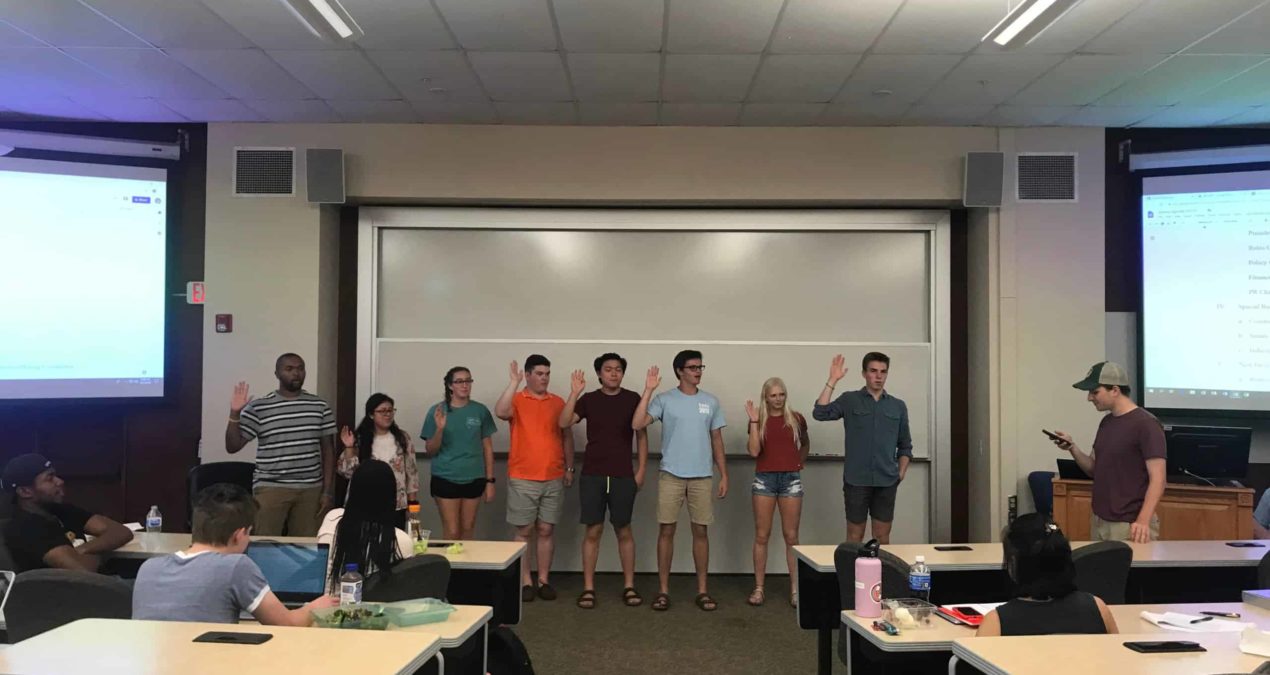 Each year DCGA elects their new class of first year senators, it creates a flurry of advertisements that are plastered on almost every space on West Quad and other academic buildings.

On Friday, September 27th the class of 2023 elected their freshman senators. At the DCGA meeting on October 1, 2019 following the elections, Student Body President Owen Crum inducted the freshman senators into the fall 2019 session. Are you interested in getting to know who you voted for? Here’s your opportunity to learn a little bit about them:

Espinoza was awarded the Posse Scholarship which influenced her decision to come to Denison. She also had a desire to attend a medium-sized, rural, liberal arts university. In just the few weeks she’s been here, Espinoza realized that being a leader and stepping out of her comfort zone allows her to showcase her personality. Her desire to run for DCGA stemmed from showcase a new perspective on ideas and matters that will be discussed. The first thing Espinoza hopes to do is to “make sure racial discrimination is not an issue on campus and bring forth the voices of those who feel segregated in the Denison community.”

Ferguson decided to come to Denison because he finds great importance in liberal arts education. Specifically, he loves how you can be in a town like Granville but connected to the world too. When asked “Why DCGA?” Ferguson said that he believes it is important to have and give a voice to those who don’t necessarily want to stand up in front of everyone.The first think Ferguson plans to do is to “make sure the freshman class [and all classes] knows what we do and what DCGA is.”

Murphy chose Denison because she loved the PPE major; she says the best way to help people and “in order to study politics you need to understand how people think.” She is attracted to the holistic campus that Denison offers and wants to help DCGA behind the scenes and craft a board that lasts for future classes and reflects the values of the students and campus. Murphy wants to create a website for DCGA that promotes transparency and a place that holds all club information (biography, meeting time and place, etc.) to help students get more involved.

Nowling is the recipient of the Dennison-Columbus Alliance Scholarship which influenced his decision to come to Denison; however, Nowling states that Denison has always felt like a home away from home. He decided to run for DCGA because he “wanted everyone on campus to feel like they were being represented in decisions pertaining to our campus.” He looks forward to bringing a different perspective to DCGA and Denison’s campus Above everything, Nowling hopes to be a voice for everyone at Denison. He also wishes to recognize and appreciate all campus employees that make our lives on campus feel more like home.

Seely was originally set on the naval academy but changed his mind and felt that he was meant to go here instead. He has always been passionate about leadership and the exchanging of ideas. Seely is dedicated to improving the campus in any way he can. His top priority right now is to “provide more injury prevention and treatment programs for club athletes because right now club athletes don’t have access to the trainers in Mitchell.”

Stallcup decided to come to Denison because of the pre-law program and to play softball here. Stallcup has a strong interest in politics and made her want to run for DCGA. Stallcup elaborates saying that “not only do I love government, but I wanted to run for DCGA because I want to make a difference here at Denison.” Stallcup hopes to make the Denison community better in any way she can.

When asked “Why Denison?” Watters said that he could tell Denison was an “awesome community” with gorgeous surroundings and great people. Watters believes in the importance of standing up for yourself and working for what you believe in. His primary goal is to work on “diversity policies in terms of making sure that everyone is represented…[and] language is something that should not be overlooked…so making sure that we use people’s first language.”

Ziegert grew up in Granville and his mom is a professor at Denison teaching Economics, Environmental Studies, and Philosophy, Politics, & Economics(PPE) so he is already comfortable and aware of the community here. Throughout high school, he was president of various clubs and discovered through those positions that he really wanted to focus on bridging the gap between students—he wants everyone to be comfortable and be able to communicate with each other. The first thing Ziegert wants to create is a “system where there can be a safe space for students to engage.”

All of the senators wish to thank the class of 2023 who helped get them into these positions to change the campus for the better. Congratulations to all the new first year senators and good luck.