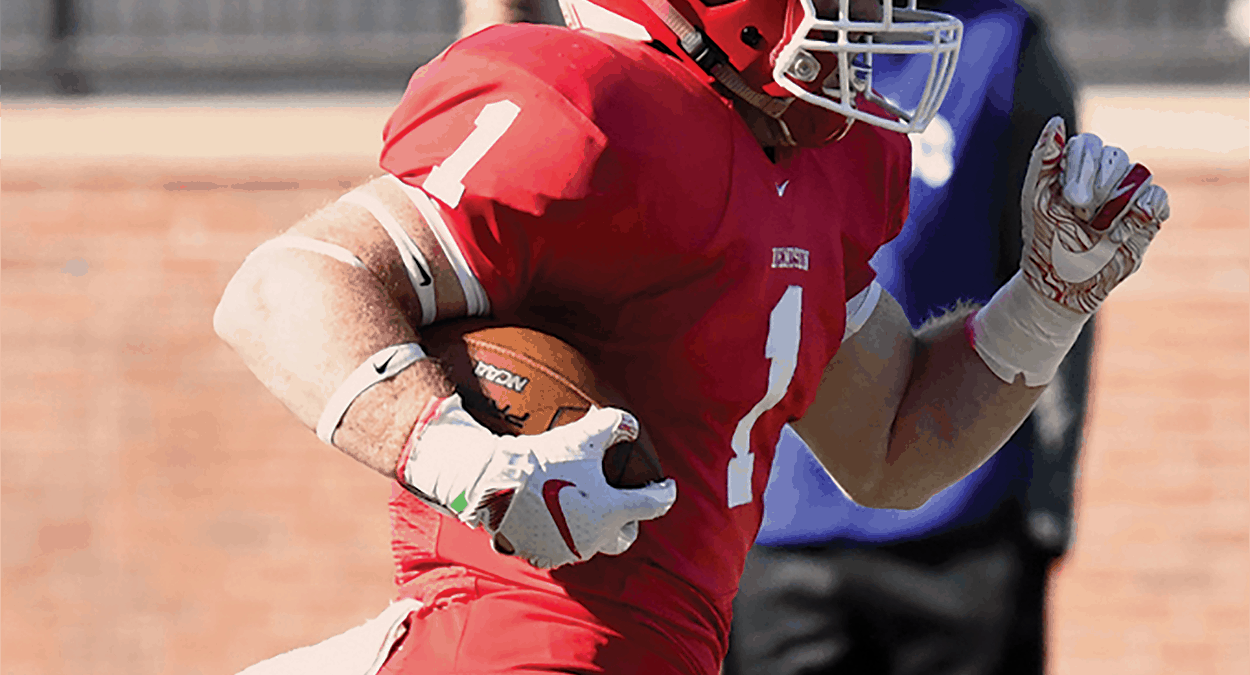 Football rolls over Oberlin 49-0 in NCAC matchup, improves to 4-1

CORDERO ESTREMERA, Asst. Sports Editor—The difference between a good football team and a great one is culture. Denison’s football team has an established culture of commitment, unity, and tradition. Defensive-lineman Ben Cross ‘20 spoke to their pride of The Rock.

“Our biggest tradition, and one of the staples of our program, is the Woody Hayes rock. It’s required that all Denison football players (both past and present) touch the rock every time they pass it.” This indicates a high level of discipline within Denison’s football family. A discipline which allowed the Big Red to dominate a weak Oberlin team, scoring 49 unanswered points.

The Big Red took the initiative, jumping out to a 28-0 lead with less than a minute remaining in the first half. Denison’s defense pounded their chests, suppressing any momentum Oberlin’s offense managed to scrounge.

Oberlin’s offense was held to 226 yards of total offense, averaging 3.6 yards each play. Comparatively, Denison had 493 total yards of offense, averaging a gain of 6.6 yards per play. A true display of the gap in offensive firepower between both teams.

With 4:21 remaining in the first, quarterback Drew Dawkins ‘22 connected with wideout Peyton Vining ‘21 for an explosive 41-yard touchdown pass.

Denison continued to capitalize on this momentum. Ryan Hallinan ‘22 snagged a 46-yard interception for a touchdown. It was an impressive catch, however, this play illustrated the team’s comradery. Ryan intercepted the ball, and the remaining Denison players had adjusted immediately. He created an opportunity, but the team put him in a position to score. And the team had fun doing just that, playing the sport for the people, the family.

Ben and the team reiterated how special this season’s been. “This has been a special season so far and our strong culture and confidence in one another has allowed us to band together and move forward,” Ben said.

The second half of play provided an opportunity, giving hard earned playing time to non-starters. It’s to be noted that starter Alex Minton ‘20 rushed for two touchdowns, closing any opportunity Oberlin had to recover.

Late in the fourth, Brad Baldinger ‘20 recorded his first touchdown of the season, which connected with wideout Esteban Sainz ‘22. Despite the game being essentially concluded, this drive consisted of plenty of energy and passion, which was prevalent throughout the game.

The game concluded 49-0 in Denison’s favor, improving their record to 4-1 overall and 3-1 in conference play. This Denison team will continue to build off this success. Their commitment to not only the game, but to each other makes this team unique. The response to their success has been great. Ben Cross ‘20 expressed, “We all appreciate the support of the Denison community. People around campus come up to me all the time talking about our program, and I think that is very special.” There are only a few opportunities left to support our exciting football program at Piper Stadium. However, their next game will take place at 2pm on Wooster’s home field.