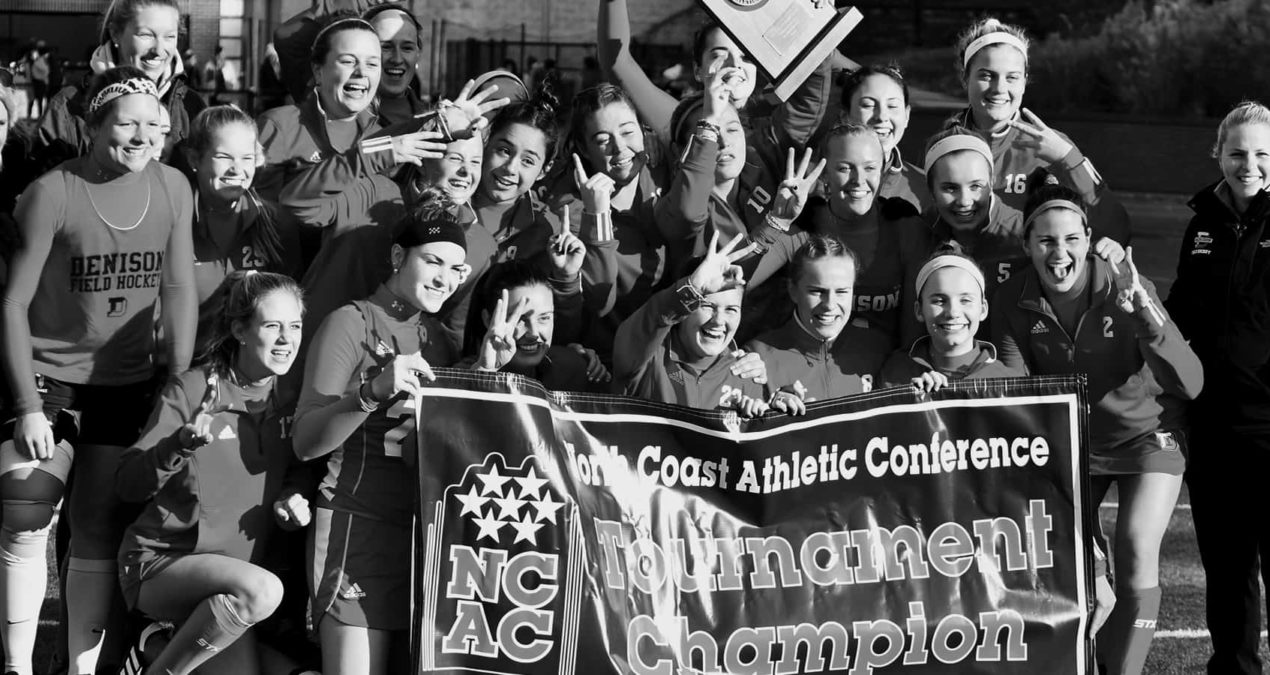 JOEY SEMEL, Editor-in-Chief—Call it a three-peat.

The Big Red field hockey team won their third straight North Coast Athletic Conference Championship this past Saturday when they defeated Kenyon by a score of 2-1.

Both goals came off the stick of Charlotte Happel ‘20 during the first half. The first goal came off of a penalty corner, and Happel connected on a pass from AC Veith ‘22. The second goal was assisted by Charlotte Godfrey ‘21. Godfrey is tied with teammate Abby Scully ‘21 for the NCAC lead with seven assists.

The goals were Happel’s fifth and sixth on the year.

As for Godfrey, she also led the team in goals and points this season. She finished the year with nine goals and twenty-five points.

The two early goals allowed the Big Red to focus on the defensive end in the second half, and despite allowing a goal in the 51st minute, they held on for a 2-1 win and their third consecutive conference championship.

Teya Adams ‘21 added three saves in net for the Big Red to complete a strong year for her. She will finish the year with a .54 Goals Allowed Average (GAA) and a career high 49 saves.

The Big Red also benefited this season from a solid mix of young and veteran talent.

Scully and the rest of the junior class have enjoyed immense success since their arrival on the Hill three years ago. She spoke to how it feels to win her third conference championship.

“It has been such a privilege to be a part of this family and program, and words cannot describe how grateful I am for this amazing experience. It is so exciting to be able to bring home a third NCAC Conference Tournament Championship. I am so thankful to be able to share this feeling with the rest of the junior class. It means so much to see how everyone’s hard work has paid off over the past three years,” Scully said.

Thanks to the win, the Big Red will make their third consecutive trip to the NCAA Tournament. They’ll travel to Rochester, New York to take on the Yellowjackets of the University of Rochester on Wednesday, November 13. If they can find a way to win that, they will take on fourth-ranked Tufts University in the second round.

According to Scully, the mindset does not change heading into the Tournament.

“These women have worked so hard this season for this moment, and we are ready to take on the next challenge as we prepare for the NCAA tournament. Our mindset entering the tournament is to continue to work hard for each other and to fight for every opportunity we are given,” Scully said.

She also spoke to how the team has grown from the start of the year to where they are now.

“Last year, we lost an amazing group of seniors who were so valuable and important to our team. Our freshman and returning players fought extremely hard to continue the legacy of excellence that they left behind. Throughout the season, many different players were able to step into important roles on and off the field that helped this team get to where we are today. I am so proud of what we have accomplished this season,” Scully said.