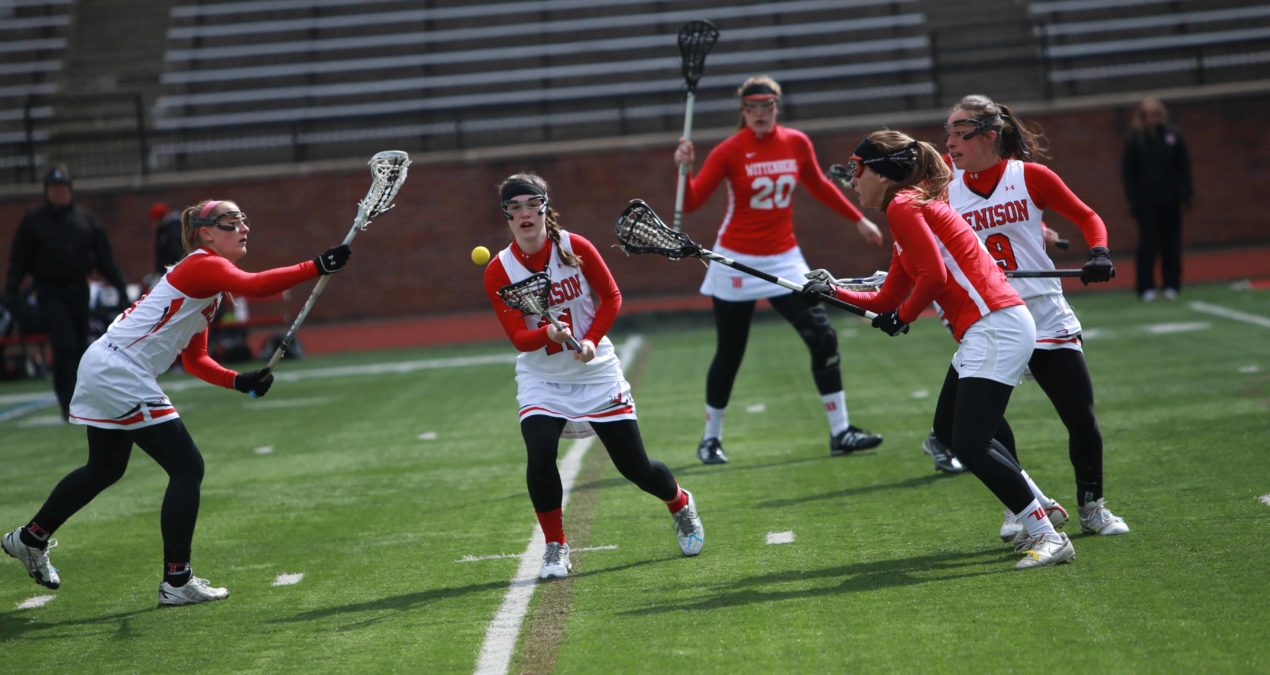 With under a minute left in regulation, and the Big Red down by one, Erin Keller ’15 wanted the ball. A player that scored all her goals in the final three minutes of the halves and overtime, the team wanted the ball in the hands of the most clutch player on the team.

“The last couple of minutes were certainly a whirlwind; possession was key,” Keller said. “Every draw control and shot was essential, so we had to make smart decisions.” Attacker Lizzy Pellicane ‘16 has scored eight goals and notched six assists this year, despite the team’s slow start to the 2015 campaign.

Keller won the draw, sprinting and darting all the way down the field to whiz a ball by Wittenberg’s goalie to even the game at 15-15 with only 28 seconds to spare.

Her teammates swarmed her in elation but knew they had to score or would need to win it in overtime. Carol Allen ’16 put a shot on goal just 18 seconds after Keller had tied up the game, but a magnificent save by Wittenberg’s Kelly Reuter would be the final play of regulation.

In overtime, Claire Ludlow ’17 broke the tie, putting the Big Red up by 1. Wittenberg’s women followed up Ludlow’s goal with three of their own, shooting darts by goalie Laura Van Horn ’16. With 22 seconds left to play, down by 2, Keller scored the goal to bring them to within one. This would not be enough for the Big Red, who were unable to get another shot on goal, which meant their third straight loss and their first conference loss of the season.

Allen thinks a cause of this recent lack of success is their inability to stay focused for the entire 60 minutes.

“We have sparks of greatness, but we need to maintain if not increase our intensity as the game progresses,” Allen said. This is not the end of the season by any means for the Big Red, but three straight losses puts them in a place where they need a win against a Wooster team that is currently ranked second in the NCAC. With these losses, Allen knows every game it is important to focus on the right things.

“Each game we play is a chance to learn and grow as a team and prepare us for the post season play, where hopefully we will meet Wittenberg again with a different ending,” Allen said.

As for the slow start, Keller is not worried. “I think we need to remain positive despite a bumpy start to our season,” Keller said.

They will try to get back to their winning ways this Friday when they travel to Wooster to take on a tough Fighting Scot team.