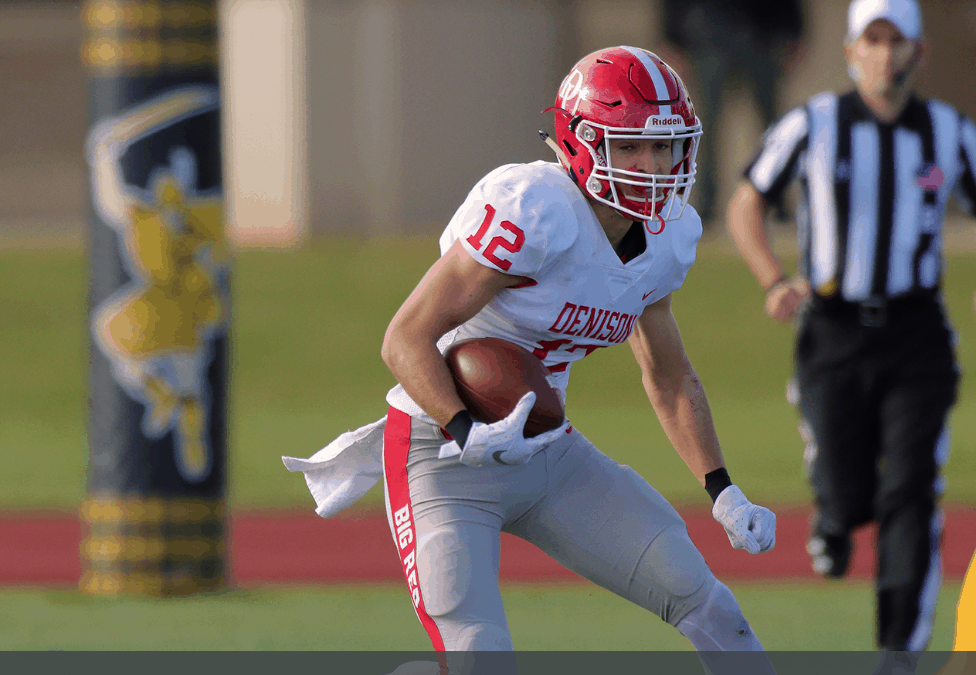 CORDERO ESTREMERA, Asst. Sports Editor—A team improves most when confronted with struggle and forced to find ways to overcome them.

That’s what the Big Red accomplished this weekend when they withstood some early woes in the first quarter in a dominant 42-7 victory against the DePauw Tigers. This victory improves the team to 6-1 in North Coast Athletic Conference (NCAC) league play and 7-1 overall.

The Big Red football train continues to steam over their opponents. However, their production on the field is far from being the only thing that makes this team special. Their comradery and dedication to the sport speaks to the great individuals within the program. Beyond that, it’s clear in watching this team compete that there is a strong mutual commitment to one another from player to player.

Defensive linemen Nate Keirn ‘20 reiterated this: “This year’s team is unique due to the notion that our team was going to be down after our success of last season. We have a lot of new faces in various positions however we also have a lot of guys who have been 2-3+ year starters who have been able to bring along younger guys,” said Keirn.

This sense of unity was prevalent throughout the entire game.

Early in the first quarter, DePauw grabbed ahold of the momentum, opening the game with a 5-play 62-yard touchdown drive.

Denison responded with a 10-play, 75-yard drive of their own which finished with a touchdown connection between quarterback Drew Dawkins ‘22 and tight end Dallas Griffiths ‘21, one of Dawkins’ favorite red zone targets. Dawkins completed a 10-yard pass to the linebacker-converted-tight end in Griffiths to tie the game at 7-7 half way into the opening quarter.

DePauw wasted little time to respond. They marched down to Denison’s 4-yard line before running into the brick wall that is the Big Red defensive line. It’s been game-changing moments like these that have allowed Denison to deflate their opponents’ momentum all season long.

Keirn stuffed DePauw’s tailback Liam Pooler for a 2-yard rush on first down, putting the Tiger’s on the two-yard line with three downs to work with.

The defense began motioning toward the Big Red crowd, waving their arms up and down. The crowd erupted cheering and yelling, doing their part to urge on the Big Red’s defense.

Pooler carried the ball for the Tigers on second down and was met violently by a daunting wall of Big Red players.

The crowd erupted. It got even louder.

Now third and goal on Denison’s 1-yard line, DePauw subbed in a different unit. The Tigers decided to rush the ball again, however, the defense remained firm and stuffed the ball carrier for no gain.

Still stuck on the 1-yard line, the Tigers chose to roll the dice and go for the touchdown instead of settling for the short field goal to regain the lead in the first quarter.

Often times, it’s the bold play-calls that make or break a game for football teams. That was certainly the case for the pending fourth-and-goal play on Saturday.

The Tigers opted to try a screen pass after three failed rushing attempt, but were met by Ryan Hallinan ‘22 and Andrew Smith for a two-yard loss to force a turnover on downs.

The goal line stand proved to be a turning point indeed. From that point on, the Big Red had their way with the Tigers in every phase of the game.

Over the next three quarters, the Big Red outscored the visiting Tigers 35-0.

It’s also notable that tailback Dara Laja ‘20 recorded his second rushing touchdown of the season and Peyton Vining ‘21 caught a touchdown pass from Dawkins as well. Dawkins finished the day with 147 passing yards and two touchdowns to go along with 40 rushing yards.