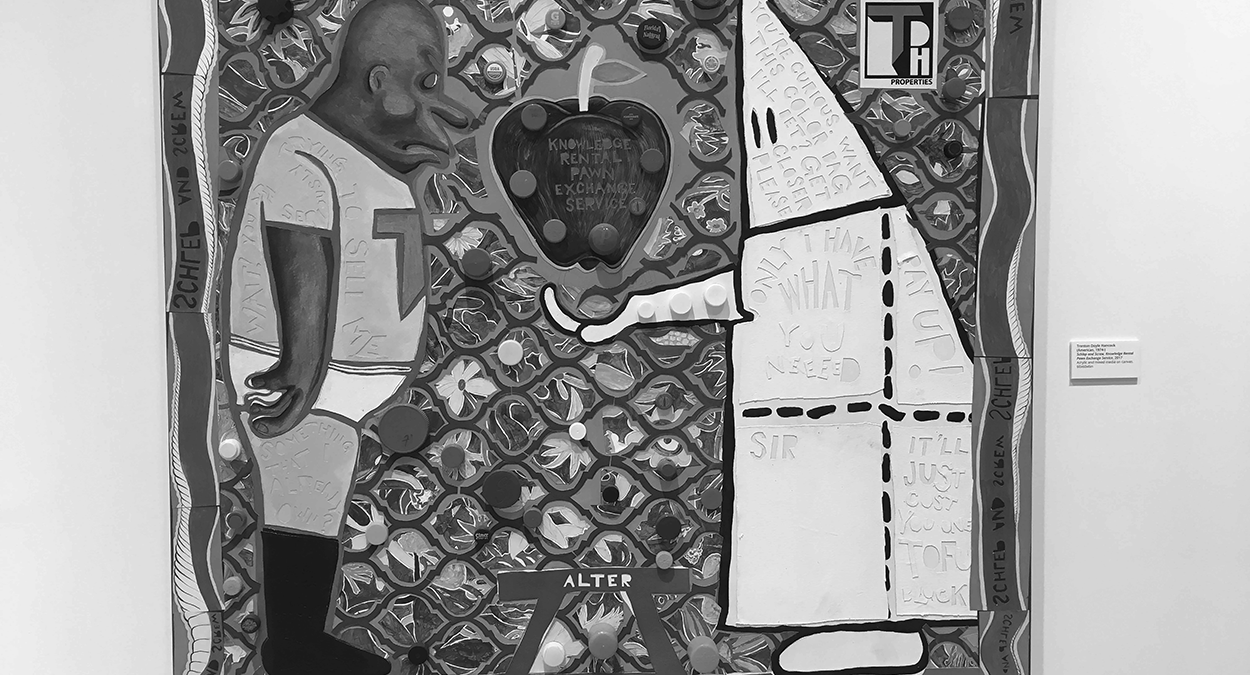 “Say It Loud” examines the black experience in America through art

DYLAN WALCZAK, Staff Writer—When James Brown called for all black people to fearlessly own their blackness in 1968, he shifted the conversation regarding race. He dispelled notions of black peoples’ acceptance of their circumstances. He ensured that black peoples’ presence would be integral to acknowledging their obstacles and how to overcome them. He reminded black people that whenever they had something to say, they were to say it loudly.

These are the messages upheld in the “Say it Loud” exhibit at the Denison Museum, Jan. 20 to May 31. Obtained from the art collection of Hedy Fischer and Randy Shull, these pieces emulate black identities and experiences. Created exclusively by black artists, they speak to the narratives and struggles obtained individually, and collectively, by black people.

The greatest component of all of these pieces is their location: they occupy a white space with white walls. It speaks to the struggles that black people face in spaces predominantly occupied by white people. White viewers in turn may become aware of the space they occupy when faced with such a stark contrast.

Sculptures and other assemblages in “Say it Loud” exhibit a tangible quality to the experiences they articulate.

Tin fades from the wooden body of the Cotton Demon, its fingers, gleaming in red glass. Rhythm & Blues places an antiquated black caricature in a bird cage. Tamika sur une chaise longue avec Monet includes a black woman lounging amidst juxtaposed pieces of furniture. Life weaves together prison uniforms into a quilted pattern of whites, blacks, and grays. Untitled (Blue Nose, Male) depicts the head of a black man with a polka-dotted collar and a nose resembling that of a clown. BAM (For Terence) is a smaller figure fragmented from gunfire, as is shown by an accompanying video.

The exhibit’s prints capture both carefully executed and impromptu moments.

Liz and Chair with Zebra explores black femininity through its center figure and her surroundings. Public Enemy (II) is a distorted black and yellow image until, by using flash photography, a group of white armed soldiers pacing through a black neighborhood is seen. A black child in sunglasses is contrasted with a black man calling out into a void in Untitled, 125th Street and Hospital (Frenchie). Black Beauty (Alana) is a portrait of a black woman in deep blue and purple hues. Black Power depicts a gold-plated grill that says just that.

Paintings in “Say it Loud” express their messages through abstract imagery and glossy portraits.

Schlep and Screw, Knowledge Rental Pawn Exchange Service delves into an exchange between a black man and a Ku Klux Klan member. Vivid, eerie scenes in When They Found Me I Wasn’t There surround its central focus, full of red holes and covered in black bottle caps. A Disturbing Silence dons an enormous black cloth that only reveals a black man’s eyes and his top hat. Prince Albert, Prince Consort of Queen Victoria presents a defiant black man, hands on his hips, engulfed in patterns of red, black, and yellow.

These pieces’ vibrant aesthetics and complex themes thus stand out that much more. Their colors are loud. Their mediums are raw. Their messages are unwavering. They reiterate Brown’s 1968 chant “Say it loud—I’m black, and I’m proud!”