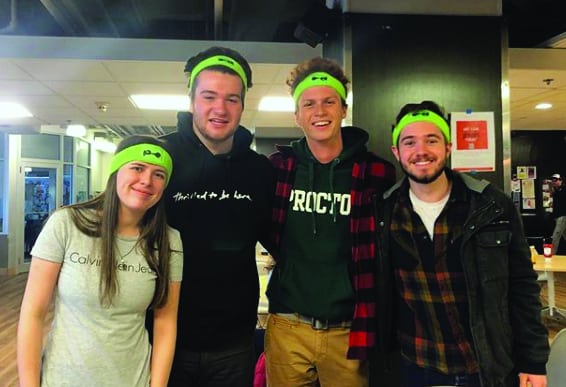 Some of the newly recruited Burpees give outsiders insight

OLIVIA HARVEY, Features Editor—The Burpee’s Seedy Theatrical Company is an improvisational group on campus that has existed for over 40 years. The company originated as an acting class at Denison during the 1979-1980 academic year and the troupe has had many notable alumni on the cast throughout the years, since many members eventually pursue careers in comedy, theatre, film and entertainment industries.

Becoming a Burpee is a commitment for the rest of the member’s Denison career. The annual end-of-year show called “Out with the Old, In with the New” is simultaneously a send-off for graduating seniors and a formal induction for new members.

Ellie Laird, ‘23 is from Hamilton, Scotland and a theatre and French double major. Sam Wycoff, ‘23 is from Brewster, Massachusetts and a theatre and philosophy double major. Elliot Hoinville, ‘22 is from Kalamazoo, Michigan and is a biology major. These three ‘baby boops,’ as they are affectionately called, answered some questions about their experience as the newest members of the group.

How would you describe Burpee’s Seedy Theatrical to someone not from Denison?

Wycoff: “Burpee’s is an improv group made up of goofy goofballs that get together to make people laugh in only ridiculous and original ways.”

Are there any traditions people might not know about?
Laird: “There are traditions that people don’t know about but unfortunately they are top secret!”

What drew you to the group?

Laird: “I went to see them perform at Big Red Weekend and thought it looked like a lot of fun. I also already knew Sarah [Wilson ‘20] and Anna Mae [Murphy ‘21] from working on ‘The Wolves’ and they had told me all about the group.”

Wycoff: “What drew me to the group was mostly going to Burpees performances in the fall and seeing how much fun everyone seemed to be having on the stage and in the audience.”

Hoinville: “I did improv in high school and really enjoyed it. It was always the highlight of my week, so being able to continue to have a similar experience in college was something that I was excited about and wanted to do. Burpee’s is also a group with a lot of very cool history, between being the oldest collegiate improv group and also having had Steve Carell as a member. I also really like all the members of the group. It’s a very wholesome group with a lot of very genuine, caring people, and I really vibe with that.”

Laird: “The initial stage of auditions were scary because there were so many people auditioning and in the room. Which made it more nerve-racking than the call backs as there were considerably less people. The auditions as a whole were lots of fun.

Wycoff: “Fun, friendly and something everyone should do.”

Hoinville: “It was a little strenuous, since it can be hard to be funny for several hours a day, two days in a row. But after being done and getting in, it was extremely rewarding and made it feel worth the time and effort.

How would you characterize the new class of ‘baby boops’?

Laird: “The new class of burps are amazing. I’m the only girl this year so hopefully next year we can get more girls from my class. But the boys are great and so funny!”

Wyckoff: “I would describe the new class as an excitable and enthusiastic. I think we all have interesting and different styles we’ll get to develop over our rehearsals in the next couple years.”

Hoinville: “Super cohesive. We all knew each other before getting in, which made it easy to get along with and begin to build the on-stage chemistry which is so important for this art form. All the other burplings are extremely talented and I look up to all of them as comedians and performers, and count myself lucky to be counted among them.”

What have you been doing so far?

Laird: So far we have just been practicing lots of different games that we use in the shows. However we aren’t allowed to officially perform until Out with the Old and In with the New in April. So it’s almost like right now we are being trained up.

Wyckoff: So far we’ve been rehearsing a few times a week and having a ton of fun with it! We get together, play improv games, and laugh as much as we can.”

Hoinville: “We’ve been learning a lot about the games the group plays, along with practicing running the games and overall preparing to start performing at the end of the semester.”

Is there a Burpee show/event/thing you are most excited about participating in this coming year?

Laird: “I am most excited for Out with the Old and In with the New because that’s the show when we are officially introduced as burpees and receive our jackets!”

Hoinville: “The 24 hour show is certain to be a blast, despite being exhausting as well. It’s the first weekend in March, and the first show the burplings will get to be a part of, in an unofficial capacity.”