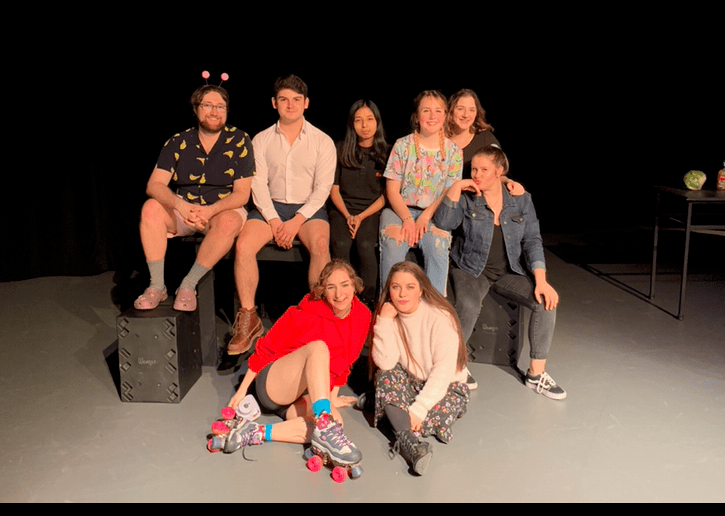 It’s always difficult to find your niche in high school, especially when you come from a different planet. The play “Space Girl,” written by Mora V. Harris, directed by Camron Alten-Dunkle ’21 and produced by the Denison Independent Theatre Association, touches on how it feels to be an outsider by following teenage alien Arugula (Alyssa Brown ‘23) and her father (Ethan McAtee ‘20) as they struggle to fit in on Earth.

Audience members easily felt engaged with the show through the up-close and personal seating. The show was held in a large rehearsal area in the Eisner Center, commonly used for teaching. The open space was able to be transformed into an intimate performance area, where audience members could sit a mere five feet away from the action.

The actors’ incredible energy also invested the audience in the show, producing laughs and tugging on heartstrings. Due to the small cast, some actors held multiple roles, with each one as equally convincing as the other. It is clear the cast had a strong chemistry, allowing them to bring their roles to life in conjunction with one another.

Actors were able to meet the playwright of “Space Girl,” Mora V. Harris, who flew in from Pittsburgh to attend a rehearsal. In addition to a small Q&A session with the cast, Harris was invited to speak in a playwriting class taught by Peter Pauzé. Harris occupies her time with academia, teaching by day and writing scripts by night. She particularly loves writing female-driven plays, as shown in other productions such as “You are What You,” and “Ghost Walks into a Bar.”

The DITA production provided an insight into the ups and downs of finding your place in the world, as well as how it feels to be alienated. The cast never failed to disappoint and brought Harris’s script to life, creating a thoroughly entertaining show.

First Man leaves you as cold as the outer space