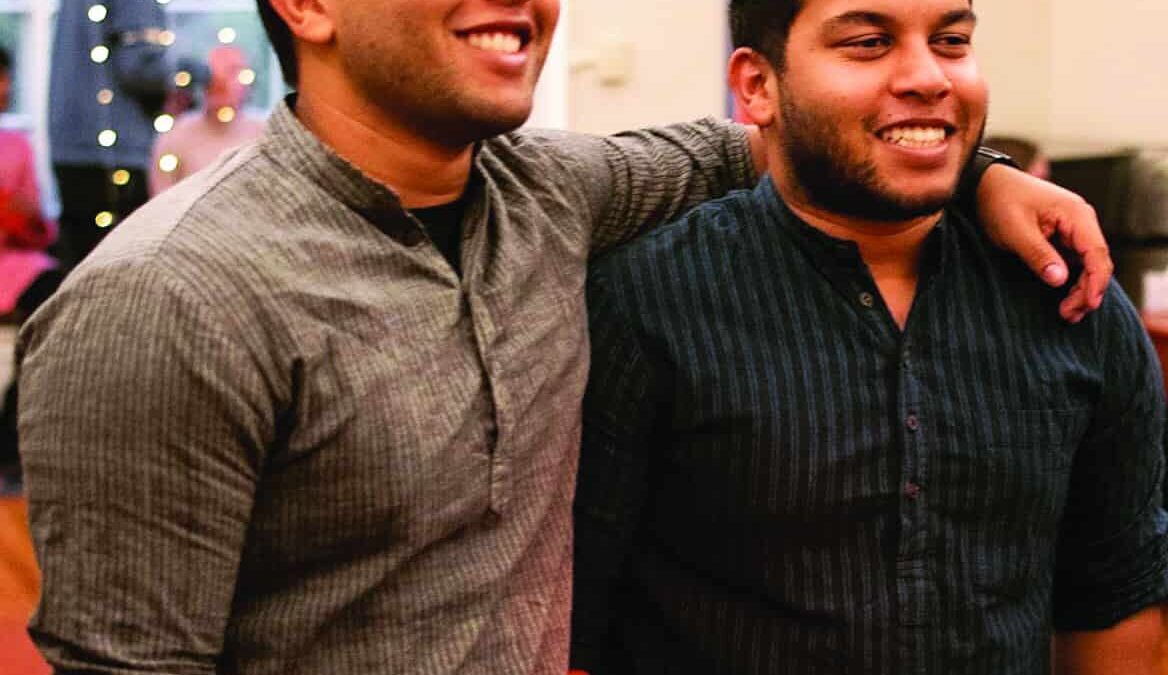 It takes two: Denisonians reveal their twin counterparts on campus and off

Abhijeet ‘Jeetu’ and Abhishek ‘Sheku’ Henry ‘20 are biology majors at Denison, born on April 20, 1998. Though not identical, many still confuse the brothers. Once, Jeetu was walking to the gym, and passed Sheku’s math professor, who said hi to him. Since Jeetu did not know him, he assumed the greeting was not meant for him and kept walking. Later, the professor told Sheku that it was a bit rude he did not respond. Although it was cleared up, they are now sure to alert new professors they have a twin.

Nicole Sherrick ‘23 attends Denison and her brother Benjamin Sherrick attends Carleton College. While they are not usually confused for one another, they still got into their share of mischief. While packing for a trip, Benjamin once dared Nicole to get into her giant suitcase. Once inside, Benjamin locked her in by zipping it up, and she was stuck for multiple hours until their parents came home. As a direct result, Nicole developed claustrophobia.

Maya Coppola ‘22 attends Denison, while her twin Phoebe attends Bucknell University. They are identical twins born on May 26, 2000. Their likeness has garnered many odd questions by others, such as the time Maya was asked how she tell her own self apart from her twin. They are mirror twins, meaning Maya is left handed, and Phoebe is right handed. Maya adds that they “sometimes have telepathic moments and it’s creepy to say the least.”

Brian Matthew Stone and Kevin Christopher Stone ‘23 attend Denison. When they were young, their family told the brothers apart by painting their toenails. “However, one day our toenails were painted the same color, so I could really be Kevin,” Brian said. They are identical, and call themselves mirror twins, meaning Brian is left-handed and Kevin is right-handed.

Hannah and Sophie Gilson ‘22 are political science and economics double majors at Denison. Although they don’t remember, one of the family’s favorite twin stories is how Hannah and Sophie had their own language as babies! They would take turns toddling up and would try to get their parents to understand them, before they could even talk. When it was clear that the parents couldn’t, the first twin would call in the other twin for backup to make the same point in gibberish. Sophie says, “The theme of us being on the same wavelength has pretty much continued ever since, though twin telepathy is seriously NOT a thing.”

Harrison and Nicholas Dengler DeChant ‘20 are both students at Denison, and have been featured twice in The Denisonian. The identical twins were born May 11, 1998, just 62 seconds apart. They claim that, on a scale of one to ten of how often they’re mistaken for one another, they’ve earned a solid 10. Thanks to their strong resemblance, they were able to pull of April Fool’s Day pranks with remarkable success in high school, swapping schedules and triumphantly tricking all of their teachers.

The Denisonian’s Rohan Arora ‘22 and his sister Ria, a student at NYU Stern, were born on February 5, 2000 in Sydney, Australia. Although they have much in common genetically, they didn’t get along at all throughout growing up. It wasn’t until their senior year of high school, Rohan claims, “we became best friends pretty much overnight, and have had a really tight bond since.”

Jack Ruddy IV ‘20 attends Denison, and his twin sister Annie studies at Marquette University. Jack was born first, so he is one minute older than Annie. He says it does not cause any tension between the two, but jokingly holds it over her head all the time. A strange fact about them? Jack claims, “We can feel each other’s pain.”

The Denisonian’s News Editor Aaron Skubby ‘23 is a PPE major at Denison, while his twin Josh studies public management, leadership and policy at The Ohio State University. Since they are fraternal, they look quite different, but one thing they have in common is their way of speaking. Aaron and Josh speak with an inflection that is unique to only them. Aaron adds, “We’re also best friends which is sick.”

Katherine and Emily Ji ‘22 are both biology majors (Katherine is a music performance minor). The two figure skate and play in the Denison orchestra: Katherine plays the violin and Emily plays the cello. They are identical twins, born May 14, 2000, and affirm that they are frequently mistaken for each other.

Katie Lotane ‘20 studies at Denison, while her brother, Charlie, attends the University of Virginia. They were born October 10, 1997 in Carlisle, MA; Katie is five minutes older, but says she always laughs when asked, because he is about five inches taller, so everyone assumes he’s the eldest.

Alexandra Dayka ’23 attends Denison studying communication and theater while her twin Kayleigh attends the University of Kentucky studying history and English. Throughout their lives they didn’t know who was older, it was only when they were getting their licenses at the DMV that they found out that Kayleigh is older.