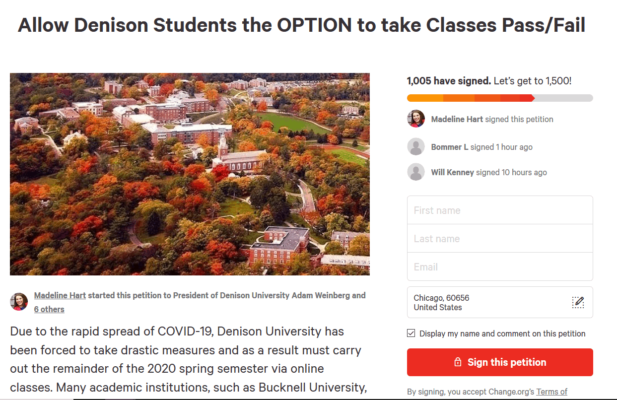 During this unprecedented time of remote learning, students took to Facebook to write about their concerns and challenges. Some of them wrote essays about their daily hardships as they try to accomplish college coursework in crowded homes.

Indira Bridges ‘20 wrote a discussion post on Thursday, March 19 in the Denison University Student Body group encouraging other students to voice what they thought about changing the grading policy for remote learning to give the option for students to choose to change their grading policy to satisfactory/unsatisfactory.

Eight Denisonians joined in on the conversation. One of the most powerful essays was from Christian Franco ‘21, who wrote about his household situation.

“I am sorry, but I do not care about my grades enough to put my family’s well-being on the line,” Franco said. “The well-being and mental health of my little siblings, mom, and grandparents is my number one priority through this pandemic, and I will not hesitate for a second to sacrifice an online session to go work in order to provide some form of income.”

Elena Meth ‘19, the recent student trustee, commented on the thread, voicing her support for the students and willingness to be an advocate for the students. Bridges ‘20 continued the conversation on a Google Meet conference call with Meth to talk about their options. Bridges encouraged all Denisonians interested in voicing their concern to join the call.

In other efforts for change in the grading policy, Madeline Hart ‘21 started a petition on change.org, on March 20, for the grading policy to be changed to offer the option of taking courses pass/fail for those who want it.

As of March 26, over 1,000 people have signed the petition. Hart argues in the petition, “…offering a pass/fail opt-in option for classes of a student’s choosing for the semester will help to alleviate some of the stresses caused by the spread of COVID-19. It would behoove Denison to follow in the footsteps of these institutions to help ensure the mental and physical well-being of their student body.”

Other higher education institutions like MIT, Columbia, Stanford and Harvard have moved to drop grades completely while remote learning citing fairness as students adjust to the different circumstances that they face.

The Ohio State University passed their resolution for recommendation to allow individual colleges to decide their grading policies for their students virtually on March 25.

In the comments of Hart’s petition, Sarah Hamre ‘20 wrote “We shouldn’t have to suffer the learning curve of professors trying to use online platforms.”

During Denison’s spring break, Information Technology Services provided a week’s worth of education to the faculty on how to use different types of conference calls and other services that could support remote learning.

Before classes started this week, faculty created videos for students to reassure them about the rest of the semester. Denison Provost collected and posted a montage to YouTube emailing the video to the student body.

Catherine Dollard ‘88, Senior Associate Provost for Academic Affairs, said in an email on March 20 that it is possible to consider the grading policy change and that the provost is actively doing so. “Provost Kim Coplin has convened a faculty working group to consider a possible temporary revision to our current S/grade policy, found in the course catalog,” Dollard wrote. “The working group is reviewing regulations regarding accreditation as well as actions taken by a number of other institutions in recent weeks. The working group plans to have a proposal ready for consideration at our Academic Affairs Council meeting on Tuesday. If approved by AAC, which includes student representatives, the proposal could then be taken to the full faculty for consideration on Thursday. We anticipate that a proposal to expand the Satisfactory grading policy will feature flexibility and remove multiple restrictions.”

Tait Ferguson ‘23, student representative on the Academic Affairs Council confirmed they passed a model for changing the grading policy and that the vote was going to the full faculty for a vote today.

“I’m not allowed to discuss the details until the school announces their decision,” Ferguson said.

The decision is supposed to be announced today, March 26, through email from the Provost.