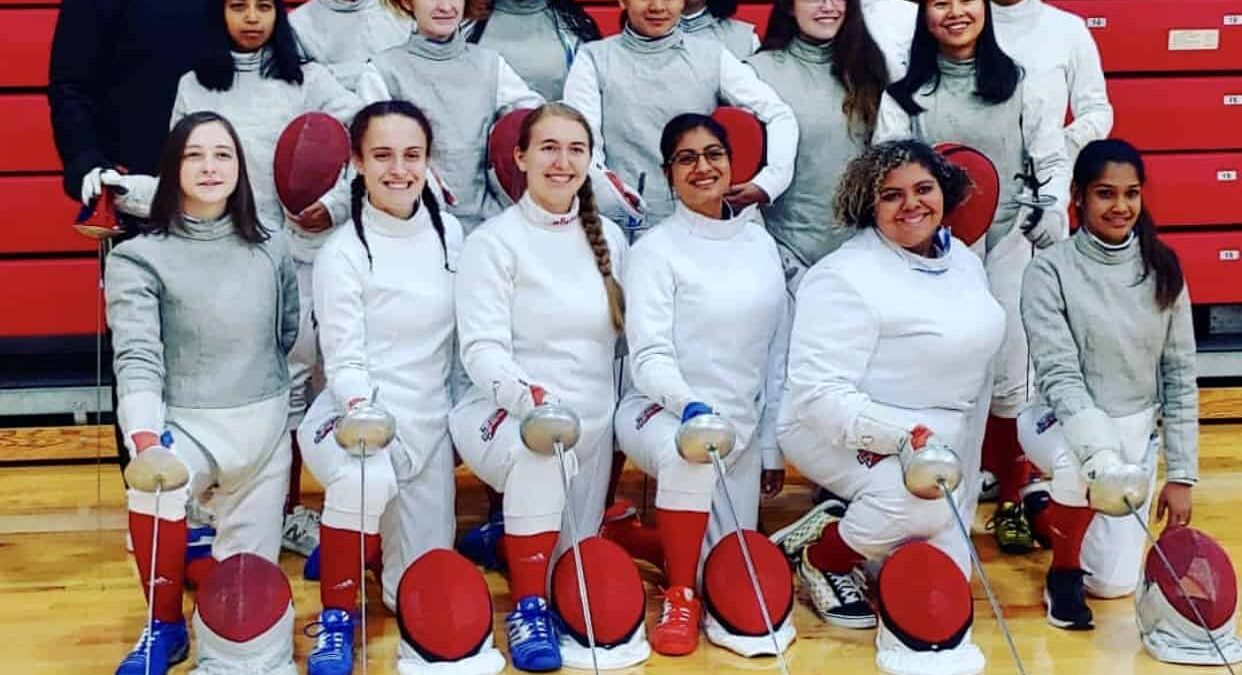 NINA COSDON, Editor-in-Chief—How does a team that didn’t exist three years ago have seven athletes qualify for NCAA Regionals?

According to Head Coach Peter Grandbois, it took grueling practices and a great deal of passion to get the team where they are today. In early March, Hayley LeBlanc ’20, Tuuli Qin-Terrill ’20, Diyanshu Emandi ’21, Denise Seifert ’21, Sé DiFilippo ’21, Shivika Churiwalla ’22 and Tessy Udoh ’23 will be traveling to Detroit to compete for a shot at NCAA Nationals.

In order to qualify for NCAA Regionals, these athletes had to win 25% of their mandated 21 bouts.

This accomplishment is even more impressive in context: this was the first season for the women’s fencing team at the varsity level, and they were competing against majority D1 teams.

Grandbois expressed the magnitude of this accomplishment: “It says a lot about the quality of the women athletes we have on the team, and their work ethic. They’ve worked very hard.”

Grandbois himself works just as hard, having single-handedly brought Denison’s fencing team back to life. For the past decade, Grandbois has been tirelessly recruiting fencers. “Every year, I’d get about 20 fencers coming out, but then within a month it was down to two…it was hard to get traction for the fencing club.”

Four years ago, however, things turned around. Grandbois convinced the Midwest Conference to take a chance on his small team of male (and one female) fencers. Grandbois told the Conference he would come with a woman’s team the following year and was able to fulfill that promise.

The woman’s club fencing team was born in 2017 and was made varsity this past year. The team is now 16-women strong, competing in foil, saber and épée events.

Going varsity has been a goal for Grandbois for some time now, and he hopes the men’s team will follow suit.

Both the men’s club and women’s varsity fencing teams have seen extreme growth, and Grandbois expects this will continue, especially as prospective students learn of the team’s success. “I just spent this last Junior Visit Day talking with 20 experienced fencers…The word is out in the fencing community, and young high school athletes are starting to contact us.”

Grandbois looks forward to welcoming these new students because many of them are experienced, goal-oriented fencers who will be a nice supplement to the current team of mostly walk-ons.

Grandbois himself was a walk-on fencer at the University of Colorado and immediately fell in love with the sport. He joined the national fencing team in the ‘90s and was ranked as high as third in the country.

After taking some time away from the sport to establish a career and family, Grandbois returned to fencing when he revitalized the team at Denison. Up until tearing his ACL, he was the number one fencer in the Veteran’s category, or as he calls it, “the old man category.”

Grandbois is currently in recovery and getting back into fencing, but coaching takes up the majority of his time. Both men’s and women’s teams have separate practice schedules, and Grandbois gives 17 hours of private fencing lessons a week.

When Grandbois says his team works hard, he isn’t kidding; the women’s fencing team has a schedule at least as demanding as any other varsity sport at Denison.

Next up for this team is NCAA Regionals. Grandbois emphasized that even qualifying was a huge deal, especially after competing against such strong teams.

Regional qualifying épée fencer Diyanshu Emandi ’21, a philosophy and economics double major from Visakhapatnam, India, expressed her excitement and nerves to be in “a bout pool with the top fencers in our region like those from OSU and Notre Dame.” Emandi continued, “It will be challenging, but it’s our first year as a varsity sport, and it can only go up from here!”

It’s been a successful first varsity season, but what’s next for the women’s fencing team? Grandbois plans to push his team even further. “For next year, I’d say, a goal would be to work on getting fencers to qualify for the NCAA Nationals. My other goal is of course to grow the team even bigger, and to get all of those fencers to improve.”