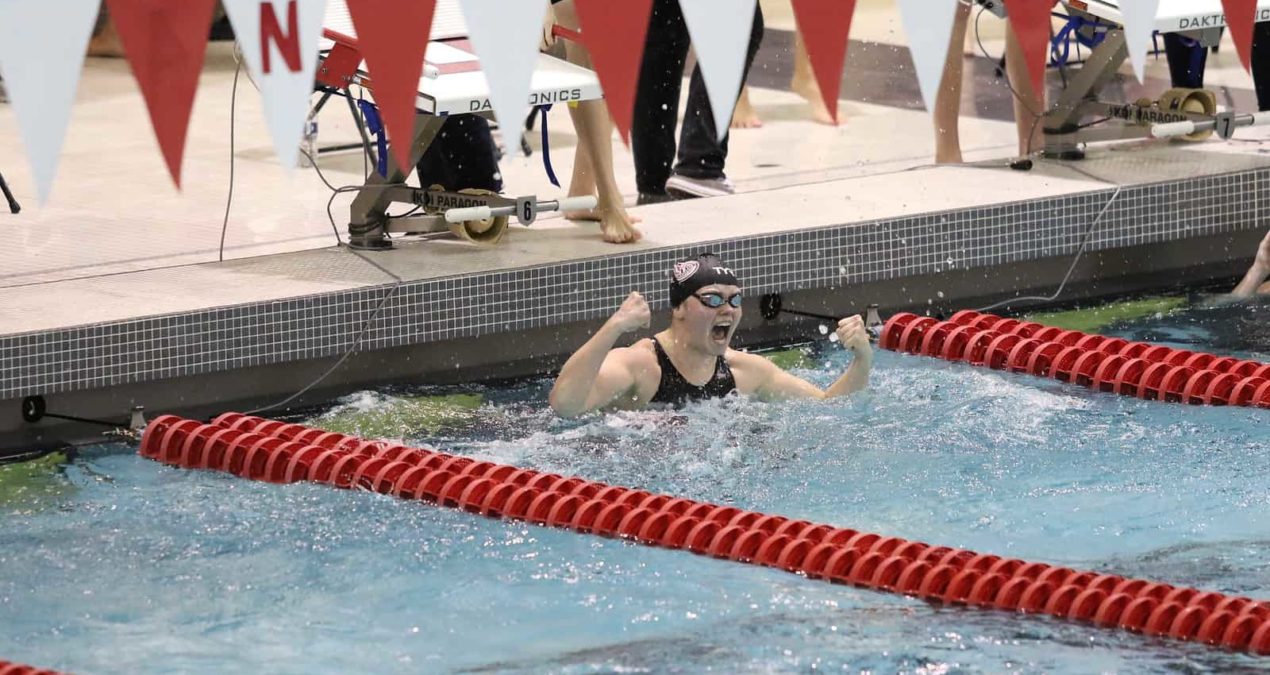 “The biggest thing for me was recognizing that I wasn’t just a swimmer, and as my time at Denison slowly comes to an end, I wanted to make sure I took part and was involved in as much of everything Denison has to offer.”

In the pool, she is a dedicated swimmer and supportive teammate. The Women’s Team placed first this year at the NCAC and are currently preparing for Nationals in Greensboro, North Carolina in mid-March. As they prepare on fine-tuning the small details and continuing to build on their solid base of training all year, Morrison emphasizes that this game is more of a mental game than a physical one.

“The training of course is still important, but as we prepare for a meet like Nationals, it’s all about how we are elevating our game mentally, and finding those one or two things that will set us apart when it comes time to race and dive.”

Part of elevating their mental game has been to really work on the team atmosphere and being there for each other. Swimming is often seen as an individual and accurate sport. Each swimmer is responsible for their individual event, and the stopwatch doesn’t lie. However, the team has worked extremely hard to get rid of this idea, and focus more on supporting each other in their struggles and accomplishments.

“We take one person’s struggles as all of our struggles, and work to surround them in a community that makes them feel valued and visible. We understand that winning and succeeding cannot be achieved without everyone. We’ve gotten rid of the idea that swimming is an individual sport. We’re only as good at what we do as the people around us help us to be. If I’m pushing one of my teammates to go faster, that’s going to want to make me go faster. And we end up raising the bar for both of us, and ultimately for the team.”

Morrison ’20 applies this mentality outside of the pool as well. This meant that she filled in for missing members when she could during her freshman year in the Wind Ensemble, participated in various events as part of MLK day, and spent community service time working with the Licking County Shelter. Academically, as a Global Commerce and Spanish double major, she is part of the Global Commerce Student Network (GCSN) which is a student-run organization that aims to connect Global Commerce majors. Although her practice times often conflicts with meeting times with different programs like GCSN, she wanted to reach out and let these groups know that she recognizes the work they do, and wanted to help in any way she could.

“In swimming, our coach always talks about how we have a window of opportunity, where during our freshman year we have what seems like an infinite amount of opportunities. As we near the end of our senior year season, whenever that may be, our window of opportunity closes. It can be a scary thought, but I’ve turned it around to mean that it’s up to me to make the most of every chance I get.”

However, this window of opportunity does not close for life, and Morrison ’20 has applied this mentality to apply to as many opportunities there are and cast a wide net to see what’s out there. She’s had her share of rejection, getting rejected from Aug-O her junior year and the Fullbright, but that doesn’t stop her from applying to learn Arabic post grad, looking at Peace Corps opportunities, and applying to be a study abroad fellow working with college athletes for a study abroad program in Chile. After graduation, she would like to join the foreign service.

“I want have experience living abroad to be able to talk to people and their culture and know what problems there are so that I could go to the government level and try to solve the problems and bridge the different cultures and solve the issues.”

Reflecting on the biggest thing she learned during her time at Denison is to be okay with letting it go, when you want something badly.

She explained that “Sometimes, when you want something so badly, that you’ve been working towards, you get so wrapped up in the final goal, that you lose sight of the process and the fun of the actual process. The unexpectedness is the beauty of life, so being able to adapt to the changes is what I’ve learned. Especially in swimming, I’ve learned that I can put myself in the position to be successful by eating, resting, training and doing all the work required and trusting that things will work out. I think luck is the residue of preparation. All I can do is know I did everything I could do and find a sense of accomplishment in the work that I put in and be ready to let things happen.”

As Morrison ’20 continues to apply to different programs and figure out what her post graduation plans will be, her words of encouragement is one that many seniors may find comfort in.  “Everything will be okay. Denison has prepared you well with lots of connections.”