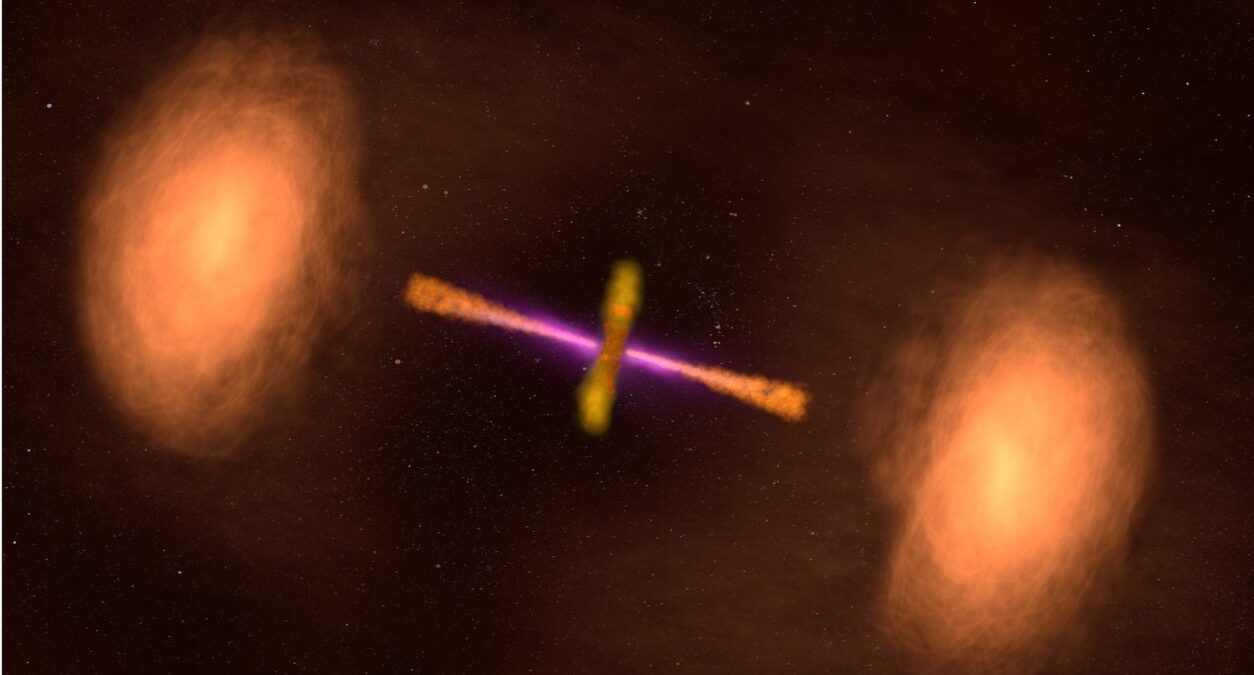 LIZ ANASTASIADIS, Editor-in-Chief — Dr. Dan Homan, professor of astronomy, physics, computational science and data analytics at Denison, was involved in the founding of a galaxy out of this world.

The team of astronomers mapped a galaxy far, far away using radio waves and saw a familiar resemblance to a Star Wars TIE fighter. The object, called TXS 0128+554, experienced two powerful bouts of activity in the last century, according to NASA. See below an interview with Dr. Dan Homan and The Denisonian.

The Denisonian (TD): Why did you start to study galaxies? Tell us about your particular passions. What types of galaxies do you study?

Dr. Dan Homan (DH): I’ve always had a passion for Astrophysics.  I like to say that I’m a victim of Carl Sagan, as his famous “Cosmos” series caught my imagination when I was 8 years old and never let go.

The galaxies I study today are distant “Active Galaxies,” which means they are unusually bright, giving off much more energy than can be explained by their stars alone.  We think that each of these galaxies has a supermassive black hole at its center which is billions of times the mass of our Sun.  As matter falls downward into the center of the galaxy, it releases energy and we can see the most powerful types of these galaxies from halfway across the observable Universe.

TD: Tell me specifically about your research. Do you have a niche?

DH: A fraction of these Active Galaxies have a very unusual property: twin “jets” of matter which are flowing outward from the center of the galaxy at nearly the speed of light in opposite directions.   These jets can be truly spectacular, in some cases stretching in narrow beams from the center of the galaxy outward for hundreds of thousands of light-years, before forming giant lobes of gas well outside the galaxy itself.  How a supermassive black hole can generate such tremendous outflows of material is something we are still struggling to understand, and I’m interested in everything from how the jets are accelerated and collimated near the Black Hole, to the types of matter which resides in the jet itself.

I use radio telescopes distributed all over the world which are combined to create a gigantic telescope, roughly the size of the Earth.  This technique is called “Very Long Baseline Interferometry” or VLBI for short, and together these telescopes give us the resolution to peer into the heart of a Galaxy which is billions of light years away.  We can see structures in the center of the galaxy which are on the scale of light years and tens of light-years, so we can watch material flowing and changing over time.  Our research collaboration, the MOJAVE program, studies a large sample of about 400 of these jets to understand how they work (https://www.physics.purdue.edu/MOJAVE/).

TD: What was your involvement in the Star Wars galaxy project?

DH: TXS 0128 is one of the galaxies that we study in our larger program, and my involvement in this particular paper was primarily through my contributions to measuring and quantifying the motions we see in this young jet.

TD: Who were the other contributors to the project?

Aneta Siemiginowska, Astrophysicist at the Harvard-Smithsonian Center for Astrophysics

TD: What do you enjoy about being a professor at Denison and how does this contribute to your research as a whole?

DH: I love working with students, whether it is in the classroom or on my research.  It is so much fun to share my passion for Astrophysics with curious and engaged minds, and I think there is a wonderful synergy between the process of learning to think critically and deeply about the world and the kind of work we do scientifically on the frontiers of the unknown.  I try to share those connections wherever I can by bringing my research and my experience in the research process into the classroom, either directly or indirectly throughout our curriculum.

Riotous “Orange Is The New Black” avoids the sophomore slump