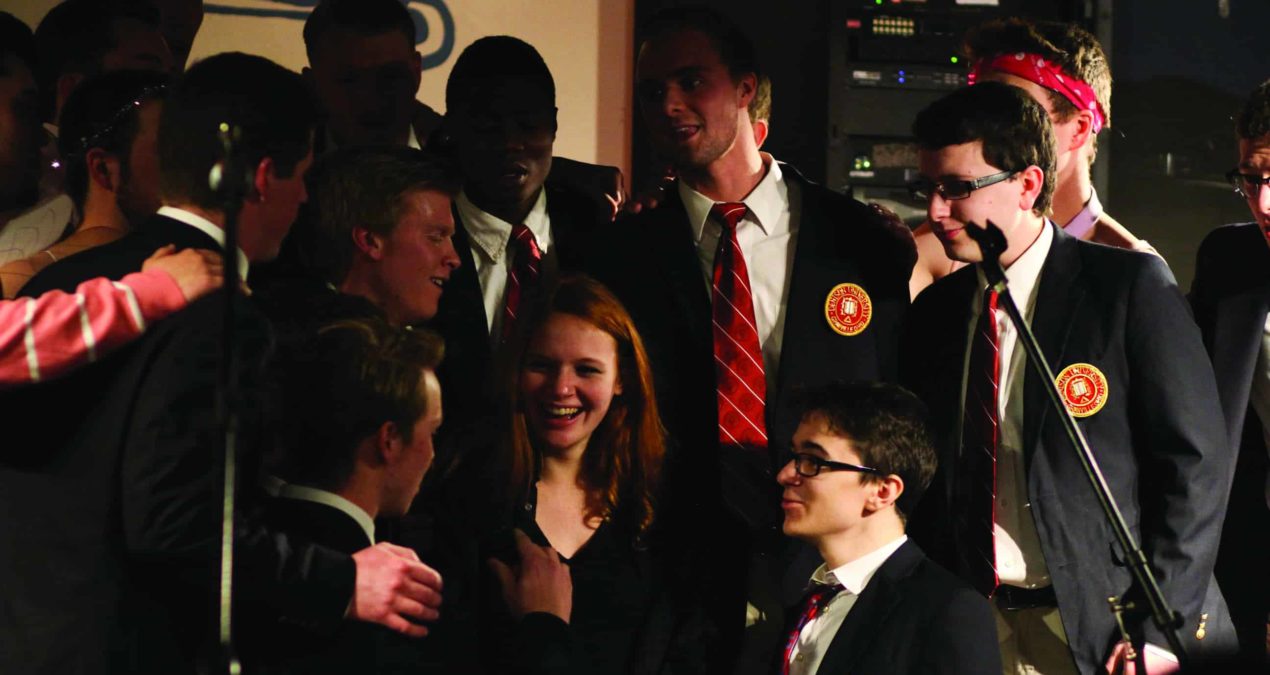 It was a full house at the Bandersnatch as the Denison Hilltoppers debuted new songs and new members during their Valentine’s Day Concert.

With several new arrangements of songs, the Hilltoppers showcased their collective talent.

Indeed, one of the most musically impressive songs may have been a new one. Justin Timberlake’s “Pusher Love” as arranged by Oliver Deak ‘17 showcased strong lead vocals and well-constructed harmonies.

The show also featured a new arrangement of Blue Swede’s “Hooked on a Feeling.”

“We had a blast seeing the way people enjoyed our new arrangements,” Ethan Ling ’17 said.

With a mixture of old and new elements, the show kept its audience entertained. “We made a concerted effort to give a revamped show, but with our traditional flair,” Ling said.

Performing a show complete with costumes, humor and a serenade, the Hilltoppers achieved their goal.

Christina Carrero ‘15 was the recipient of the show’s serenade. “When Nick pulled me up, I felt like a princess. It was really a dream come true and I feel that my entire Denison experience has been completely molded by that one moment with the Hilltoppers.” On a more serious note, Carrero added that, “Nick and Stewie brought me up for my birthday, and it was pretty rad, they’re cool guys and incredible singers. It was a fun time.”

“My favorite part of the show,” Elizabeth Rosenkranz ’17 said, “was seeing Henry Lawson as Cupid.” Lawson ’17 earned applause and laughter as he confidently donned a diaper on stage.

The latest additions to the Hilltoppers, too, were unable to escape from costumes that night. Clad in pink, the new members of the group earned their fair share of laughs in their Hilltopper debut. With a performance of Riskay’s “Smell Yo D***,” the new members left the audience in stitches. In fact, the song was so funny that the boys – not for lack of trying – were unable to finish it. Although the song did fall apart before it was over, the new Hilltoppers showed promise, flair and showmanship.

A new member, Benson Anderson ’18 made a particularly strong first impression with an arrangement of The Killer’s “Mr. Brightside” and a wide stylistic range.

“Mr. Brightside is one of my favorite songs of all time,” said Anderson, “It’s so melancholy, but it’s also upbeat and catchy. The arrangement was inspired by a few other a cappella arrangements as well as the original recording. The group did an awesome job learning it on such short notice.”

Overall, the show was a hit with students and a welcome reprieve from the cold outside. “There’s nothing quite like seeing our friends and peers enjoying a show that we put so much time and effort into developing,” Ling said.