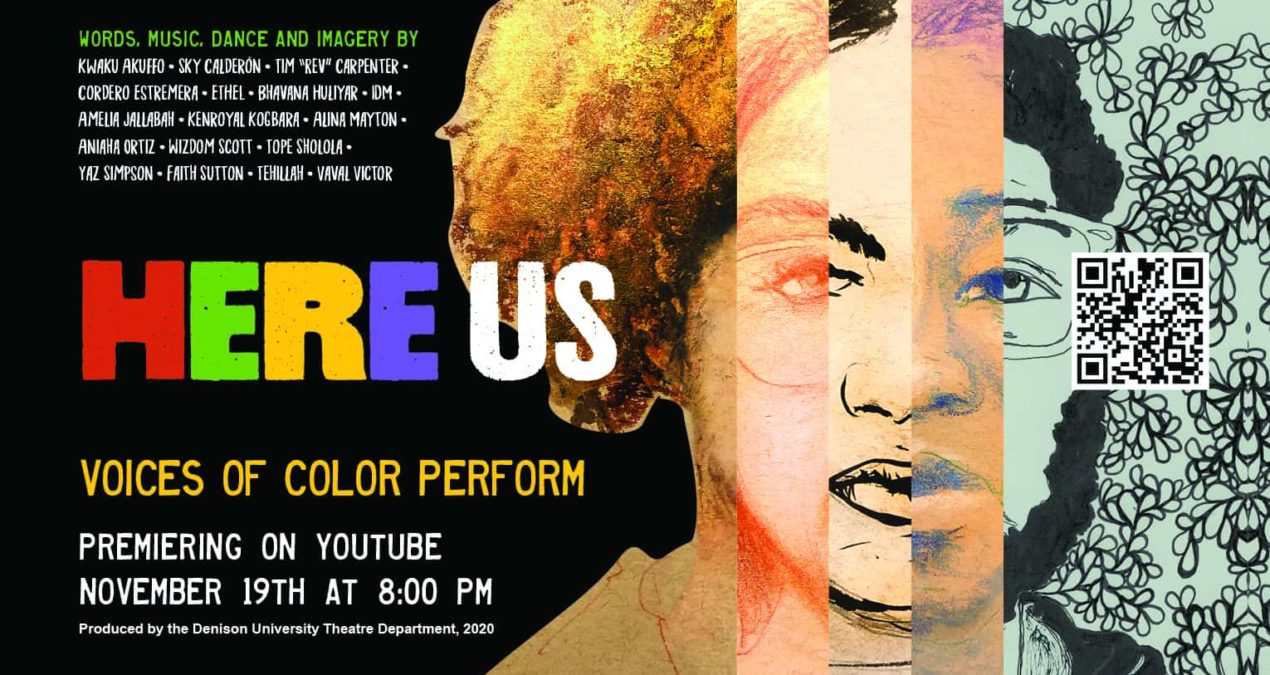 When creating the “Here Us” project, Yasmine Simpson ‘23 says they were guided by the mantra “by and for POC.”

The three student facilitators, Yasmine (Yaz) Simpson ‘23, Cordero Estremera ‘23 and Sky Calderón ‘21 helped conceptualize, organize and bring to life the “Here Us” project. Additionally, they all perform in it as well.

Simpson describes “Here Us” as “a celebratory performance that highlights voices of color on Denison’s campus,” while Estremera calls it a virtual “collaboration and culmination” of all the arts on campus.

“Here Us” consists of many POC student performances, and will be released on YouTube on Thursday, November 19 and through the [email protected] weekly email. All “Here Us” pieces will be available at this time, but the three facilitators each agreed to give a small spoiler to share some insight into their pieces.

Estremera’s piece is a rap he wrote himself, and his vocals provide the music for the Inspire, Diversify, Move (IDM) dance group that performs alongside him. Estremera didn’t want to reveal too many details to maintain the element of surprise, but added, “I think it’s going to be something pretty powerful.”

Simpson also wrote her piece herself, and describes it as her hair journey. “As a young girl, I was always very self-conscious about my hair because I’ve always kind of grown up in a predominantly white area.” Simpson says the premise of her spoken-word poem is beauty, and the piece is celebratory toward the end, as coming to Denison and meeting more people who looked like her helped her realize that her hair is not just accepted, but beautiful.

Calderón’s piece is an adaptation of Representative Alexandria Ocasio-Cortez’s “Green New Deal” speech she delivered on the House floor. Calderón made the speech her own, overlaying her performance with music and photographs that she took herself in downtown Newark. AOC’s original speech is harsh and critical, but Calderón’s take is to make it an uplifting “call to action.”

Calderón emphasized that in addition to a diversity of people, “Here Us” celebrates a diversity of mediums as well: POC artists, dancers, singers, poets, actors, photographers and more all contributed to the performance. Calderón said the mix of people “helps make a larger statement about how Denison’s voice is diverse and complex.”

Fitting with the “by and for POC” motto, Calderón said how much she loved watching the performers become a community. “To really watch the teamwork and the collaboration that’s come out of “Here Us” that I think could only happen if it was by and for POC, is so much more important to me and has grown so much more important to the facilitator team than what the audience is going to take away from our piece, although we hope that the broader Denison community does appreciate it as much as we have.”

The “by and for POC” mantra also resonated with Estremera, as he explained that he felt the audience’s takeaway from ‘Here Us’ was secondary to what the performers gained from the experience. “It’s like we’re in the room, and you [the audience] just happen to be looking in on the conversation.”

“Here Us” was primarily supervised by theatre professor Jim Dennen. Simpson said that after meeting Dennen at a Black Student Union (BSU) meeting last year, the two stayed in contact over the summer to discuss a production Dennen had in the works. Eventually, Dennen scrapped this idea and proposed to Simpson that they create a performance piece to highlight voices of color on campus.

Simpson loved the idea, telling Dennen she was “totally on board.” After extensive brainstorming, the project that would become “Here Us” began to take shape.

Simpson and Estremera met last year through their mutual love of the arts. Simpson was on the fourth floor of Shorney Hall when she heard the song “Defying Gravity” blasting from Estremera’s dorm. As a lifelong musical theatre fan, Simpson felt a kinship with Estremera instantly.

Estremera joined “Here Us” after Dr. Margot Singer recommended Dennen reach out to him. When they were first discussing the project with Dennen, Estremera said, one of the priorities was to highlight specific truths and lived experiences.

Calderón met Dennen when she took his “Speaking as a Fine Art” class. She described really engaging with the course and Dennen’s teaching style, and said that she believed the content of the speeches she chose was what prompted Dennen to think of her for the “Here Us” project.

As a newcomer to the performing arts, Calderón expressed her gratitude for the faculty mentors for not trying to make “Hear Us” hierarchical or overly directed and conducted. “It really is more of a holistic way of bringing people together.”

Simpson concurred, saying that everyone involved in “Here Us”, faculty supervisors, student facilitators and performers, was heavily involved in creating the project.

Calderón said many performers found out about “Here Us” from word of mouth, adding, “I think that’s because the nature of the content just seemed a little bit more provocative…that kind of necessitated a face-to-face conversation before people wanted to get involved.”

“Here Us” proves, said Calderón, “the Denison voice is not just homogeneous, it is diverse and complex and that can be beautiful.”

With so many different mediums, performers and stories, “Here Us” will bring to life Denison’s POC voices. “It’s going to pop off,” Simpson promised.

Outlook takes a week to celebrate National Coming Out Day