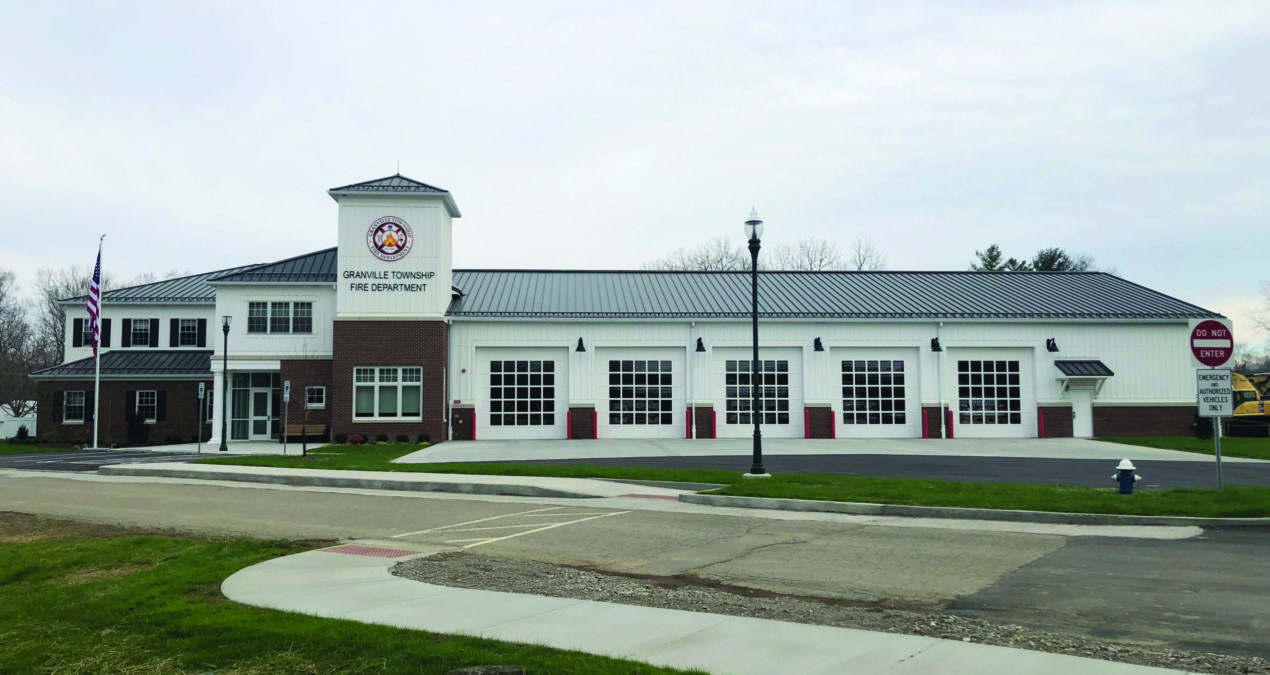 CORDELL PUGH, Staff Writer—The Granville Township Fire Department has officially moved into its new Fire Station on South Main Street just south of Ross’ Granville Market and Raccoon Creek. Construction of the new fire station began in 2019 and the Fire Department began responding to emergency calls from the new station on October 27th. Construction of the new station was funded by a $4.1 million loan from the U.S. Department of Agriculture (USDA), with additional funding from Granville Township and several individual donors.

Previously, the Fire Department operated out of 3 separate buildings at the corner of North Prospect and East College Streets, across from Mai Chau and Three Tigers Brewing Co. The main fire station building on North Prospect Street did not have sleeping quarters or adequate administrative space, so the Granville Fire Department expanded into two houses on East College Street.

The new Fire Station improves efficiency and safety not only for emergency responses, but also for Fire Department training, emergency vehicle maintenance, and many other day-to-day activities. All fire department tasks are now consolidated into the 1 building, which also has space to conduct training exercises and vehicle maintenance inside. The Fire Department operates 2 fire engines, one of which also carries specialized extrication and rescue tools; a water tanker for areas without fire hydrants nearby; a tower ladder truck; and two paramedic ambulances with advanced life support for critical patients. Vehicle maintenance and required daily checks previously had to be completed outside because of limited station space, making them very difficult to complete during inclement weather. The new station has enough room that firefighters can now inspect and maintain these emergency vehicles inside the station. The sleeping quarters in the new station are also much improved, transitioning from shared bedrooms in the old houses to individual sleeping rooms in the new station, allowing for more privacy, gender separation, and adapting to new challenges such as social distancing. According to Granville Township Fire Chief Casey Curtis, the extra space in the new station “allows [the Fire Department] to grow into this building for the next 50 years.”

The future of the old fire station will be decided by the Granville Village Council, which is currently evaluating three proposals for renovating the building. Two established Granville businesses, Day Y Noche and Mai Chau/Three Tigers Brewing Company, would like to move into the old fire station because it is bigger than their current spaces. The third interested business, VeloScience Bike Works of New Albany, is proposing converting the old fire station into a bike shop and microbrewery. The two houses on East College Street that were used as fire department administrative offices and sleeping quarters are being sold and will once again be typical individual residences.

The bridge and intersection construction project just south of the new station is set to be completed in late 2021.