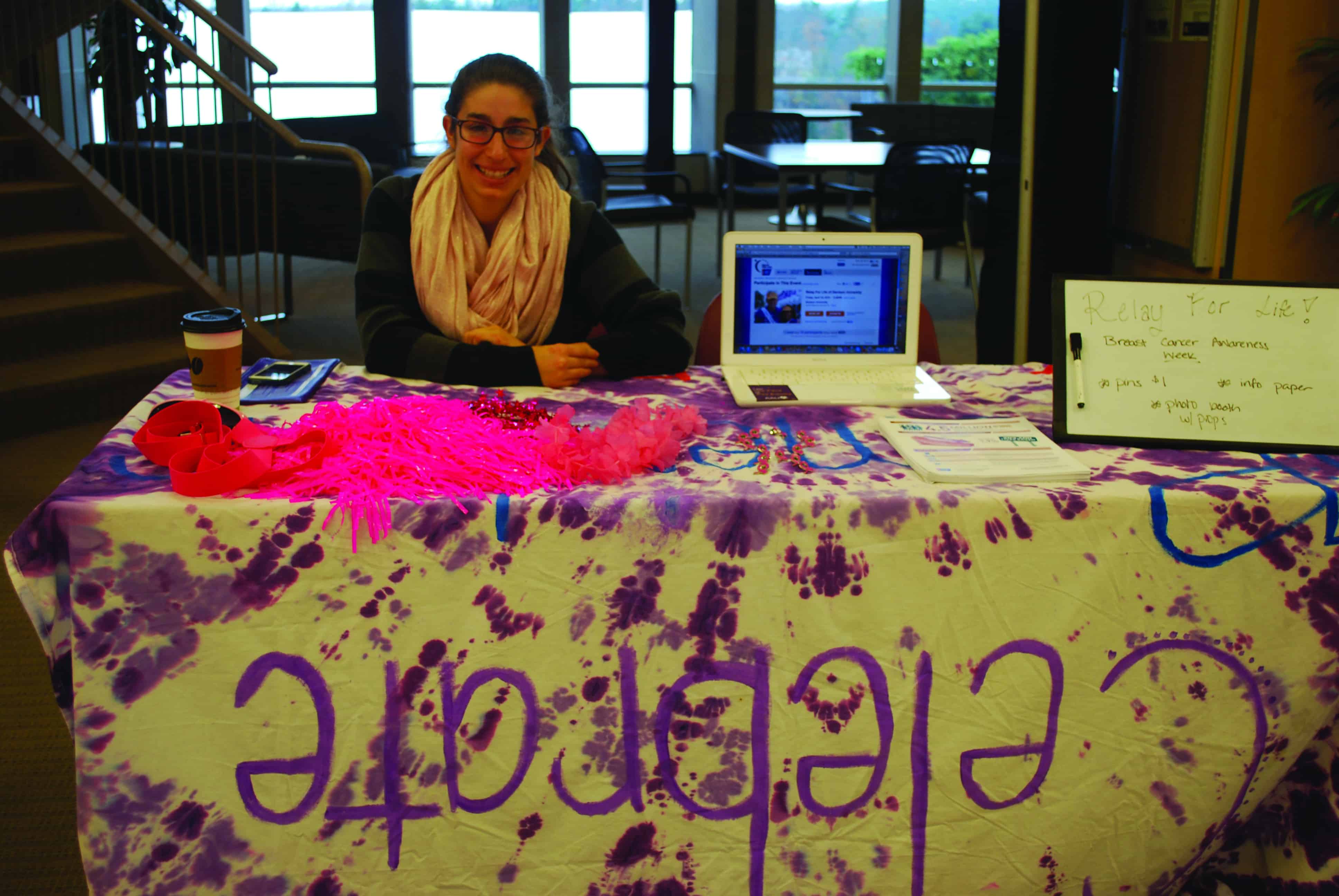 Pink pom-poms, suspenders and ribbons bedecked Slayter this week as students held up signs with slogans like, “I wear pink for my mom” or “I wear pink for my friends and family.” These efforts, which were seen in the student union and at several sports matches, are part of a new effort by Denison’s Relay for Life to raise monthly awareness for given cancers.

Volunteers managed to raise just over $50, according to Kendra Epstein ‘15, a history major from Ossining, N.Y. Epstein serves as the chair of Denison’s Relay for Life, an annual event put on in association with the American Cancer Society and its college subsidiary, Colleges Against Cancer.

Relay’s main effort for Pink Week was tabling all week long in Slayter and at the varsity football, women’s soccer, and field hockey games. Volunteers sold pink ribbons and handed out informational brochures about breast cancer.

About one in eight women, or about 12 percent, contract breast cancer annually in the U.S., according to the American Cancer Society. It is the second-most common cancer in women and is the second leading cause of cancer death in women, surpassed only by lung cancer. Around 40,000 women develop breast cancer annually, although men can also be affected, though at lower rates.

October is breast cancer awareness month. Epstein said that Relay for Life plans to table monthly for different cancers, although Pink Week was their first such effort. Relay will not table in November due to Thanksgiving Break, but will consider future opportunities.

The Relay for Life event itself will take place in April.

Epstein’s favorite part of Pink Week was the social media outreach, which encouraged students to pose for pictures explaining why they “wear pink,” or support breast cancer awareness. “That was just really interesting because we always say, ‘Cancer’s touched a lot people’…but you don’t realize exactly who,” Epstein said. “It just makes it even more personal.”

“My best friend’s mother died of breast cancer,” Epstein said. “I wear pink for her.”

Students lauded the effort. “I think Pink Week is a great way to raise awareness about breast cancer, show solidarity with those suffering from it, and become united in a common cause and color,” said Julie Rooney ‘15, a philosophy and international studies double-major from Munroe Falls, Ohio.

“It was great to see people supported the week by wearing pink and raising awareness,” echoed Graciella Maiolatesi ‘16, a dance and black studies double-major from Amherst, Mass.

“However,” she added, “I still think there were some people who weren’t aware what the week was [and] I think it would have been great if there had been even more explanation of what the week was to Denison’s campus as a whole.”