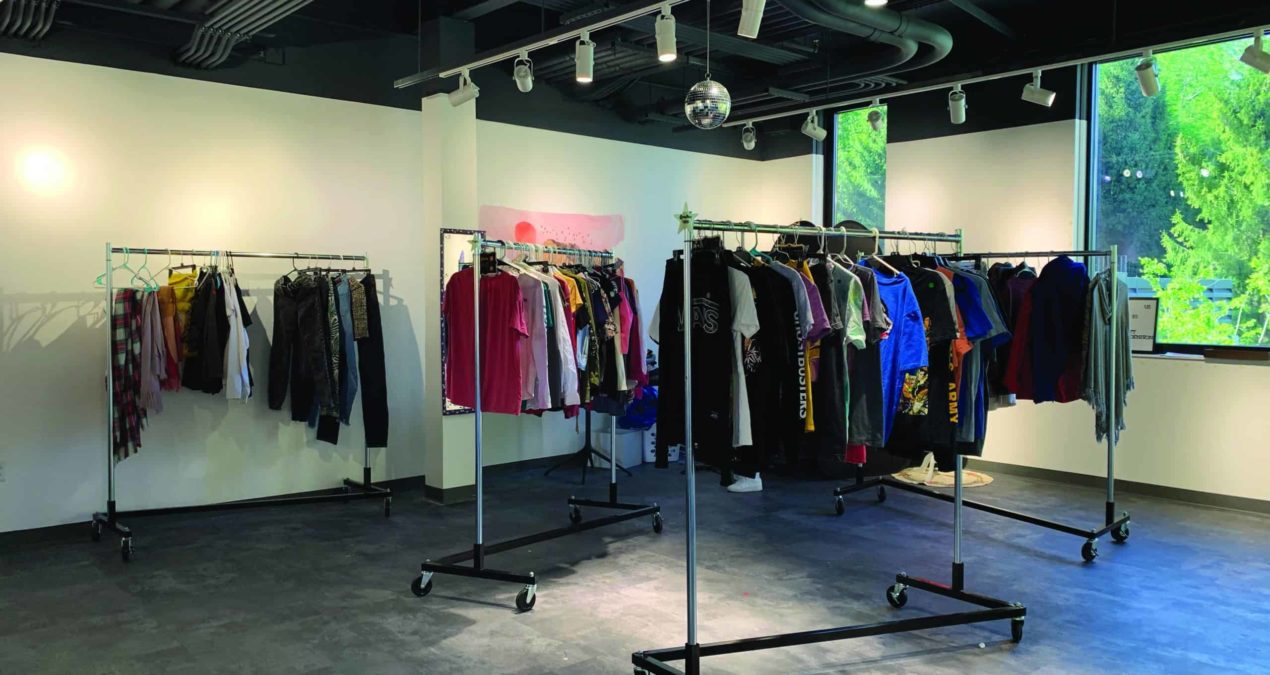 OLIVIA HARVEY, Features Editor—After months of planning and preparation, Revival Thrift opened its doors for business. The fully student-run thrift store is housed in Silverstein Hall, tucked past Slivy’s Market, and the weekend of May 1 was met with anticipation and lines stretching far past the door.

As a new and non-profit operation, the store relies on student donations, and most clothes are priced around $5 (depending on the quality), to ensure affordability and accessibility for students.

According to Whitfield, the store aims to provide diverse clothing and accessory options to embrace a variety of styles and promote an environment of identity- and size-inclusivity. She maintains that there is still even room to grow and open up options for the community, stating, “We really want to be conscious, because we know we are a diverse campus.”

Whitfield attributes the idea of starting a thrift shop on campus to an interaction she had during the fall semester. During a meeting for the Environmental Committee, a fellow student suggested a thrift store as a fun and sustainable project. After getting permission to run with the idea, Whitfiled then brought it up at a Denison Enterprises pitch competition. It was at this event that she met Brennan, and she says “really from there it just took off.”

Developing that idea into reality, however, proved to be a long and challenging process. Brennan details what the undertaking involved: “First, we had to acquire money and get the funding for it, and then get connected with Denison Enterprises and the Red Frame Lab to make sure the business aspect was good. Then we had to get the space, along with some hangers and clothing racks.”

With all these hoops to jump through, Brennan agrees with Whitfield that the team of students that have been assisting at every level are crucial to their operation, and she expresses their gratitude. “We have a fantastic team of amazing individuals, and wouldn’t have been able to do any of this without them.”

Whitfield adds that working with the First-Year Office, and particularly Julie Tucker ‘09, the Associate Vice President for Student Development, were extremely helpful in connecting them with all the necessary resources, including with securing the space in Silverstein.

Despite the various hurdles, the Revival team found . Brennan says, “It did take quite a long time, but it was really cool just to see everyone come together.”

Looking towards the future, their immediate goal is to be open at least twice a month, if not every weekend, once they are approved to use the space more consistently. Brennan highlights a need to continue to raise funds to sustain finances, as their store is a nonprofit.

Whitfield envisions Revival Thrift as a sustainable fixture on Denison’s campus. While the team that keeps the store open and running are volunteers, she plans on making it a paid campus job with a consistent location.

Beyond logistical goals, Whitfield emphasizes a desire to ‘pass it forward’ to the Denison community and use profits to create a scholarship. “Once we have enough funds, we want to pass that money on to someone that needs it, especially if they are interested in business or sustainability, and make this a scholarship or a book grant.” Ultimately, “we are happy just to give back and make a difference.”

Revival Thrift can be found on Instagram as @revivalthriftdenison. Whitfield and Brennan strongly encourage students to drop off any donations at one of the designated boxes in Huffman, Curtis, or on the second floor of Slayter Union. Students that donate one item will enjoy a 10% discount, and two or more donations grants a 20% off their next purchase.