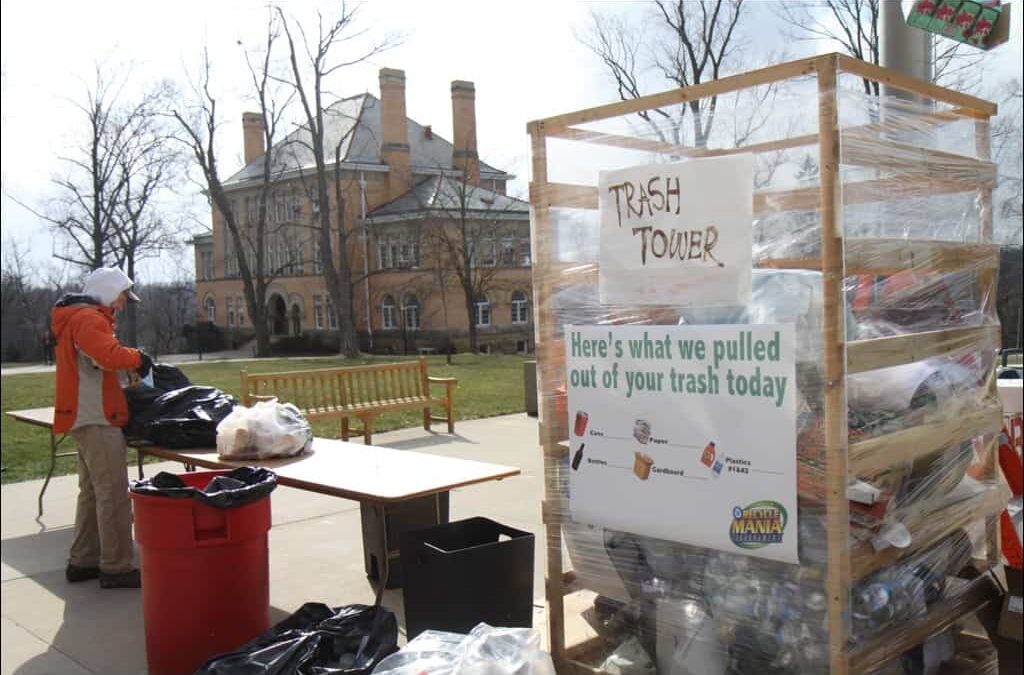 A tower of recyclable materials is not an ordinary sight in front of Slayter, but on Thursday, Mar. 21, the Denison community had the chance to witness a tower of plastics, cardboard, and glass materials more than six feet tall.

This temporary monument to recycling was the result of a Trash Sort, part of Denison’s celebration of RecycleMania.
RecycleMania is an eight-week “benchmarking tool for college and university recycling programs,” according to recyclemania.org, the website responsible for the initiative. But it also presents a healthy competition between schools, comparing total percentage of waste recycled and pounds recycled per capita.

This is RecycleMania’s fourth year at Denison, according to Campus Sustainability Coordinator Jeremy King, and Denison is currently ranked fourth in the state of Ohio for recycling percentage.

This year, students pulled 560 pounds of recyclable materials out of waste gathered from around campus. This was an increase from last year’s 489 pounds, which King said could be taken two ways: “Either we’re getting better at sorting materials, or we’re getting worse at recycling as a campus.” 19 students stopped by in front of Slayter Union, lending hands and time to the effort.

And it was enjoyable, according to Green Team member Silvia Frances, a sophomore biology major from Wooster: “It’s fun. It doesn’t seem like it would be fun, but actually, it’s sunny out, everyone’s having a good time. It’s kind of gross, but everyone is enjoying it. We’ve found some interesting things.”

Although the trash sorted on Mar. 21 was a small percentage of Denison’s total waste, it helped bring visibility to the issue of recycling. “It’s good to display all the things that could have been recycled, to get people to realize how much goes to waste, and how easy it really is to recycle,” Frances said. King also said that it brings the issue home to the Hill: “This lets students walk past and see how much they’re wasting.”

The recycled materials will go through Denison’s normal recycling process, and be sorted at the facility north of campus. RecycleMania will end Mar. 30, but our campus will continue to recycle, in the effort to decrease waste.

Denison partners with 13 other schools for Koru