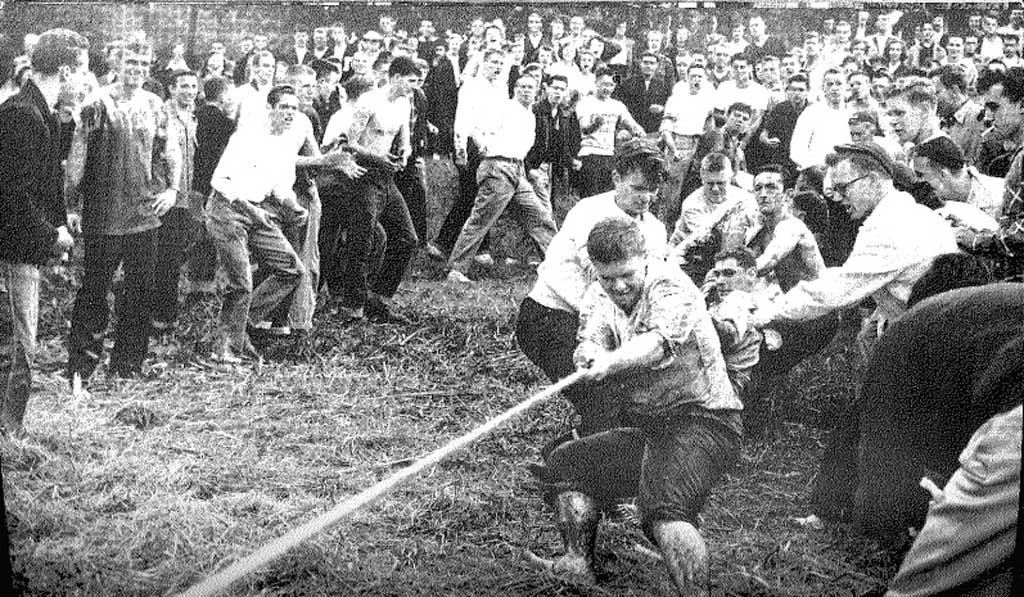 D-Day is one of Denison’s longest-standing annual events, dating back to 1909, and there are about as many rumors circulating about how it got started as there are about who the featured musical guest will be each year. So how exactly did it begin, and what journey did the event take in evolving into what it is today?

The day featured a large Tug of War event and a football game. It was tradition that first-year students wore beanies every day until Scrap Day, and if they won the Tug of War contest – literally by dragging the sophomore class into Ebaugh Pond – they were freed from wearing the distinguishing caps.

Chessman, a professor emeritus of history at Denison, writes that when the Denison Campus Government Association was founded in 1946, Scrap Day changed into D-Day, a “twice-a-year celebration of the whole college.”

Governance Association was founded in 1946, Scrap Day changed into D-Day, a “twice-a-year celebration of the whole college.” Evolution of the modern D-Day

An article from a 1965 edition of The Denisonian suggested that the day was founded to try and focus the energy of the student body, specifically the influx of men returning from the service, in a fun and safe way. The Denisonian wrote, “Due to the general post-war exuberance and increased manpower on campus, the delightful custom of dorm raids began. It was quickly decided that a more constructive way to let off steam was needed…”

David O. Woodyard ‘54, professor of theology, said that when he was a student here, “Denison was not a very intense academic institution, and therefore a celebration like D-Day was more congruent with the ethos of the institution.”Woodyard explained that it was completely under the jurisdiction of students, and DCGA had the right to simply go to the chapel bells and play the “Tiger Rag,” often referred to as “Hold That Tiger,” a popular jazz tune from the early 1900s. The song signaled the cancellation of classes and the commencement of the D-Day festivities, “disregarding any prerogative of the faculty.”

Maria Theresa Barney Professor of Philosophy Anthony Lisska has vivid memories of the faculty meeting in 1970 at which it was decided that the day would no longer be a surprise, but rather planned by students. This big change in the history of D-Day came about because of a suggestion by former professor Al Lever. He realized that students were guessing when the event would be, and as a result, were not doing any work for about a week and a half leading up to the actual day. There were also sometimes issues of false alarms and pranks, generally perpetrated by the Wingless Angels.

During the time that associate professor of history Catherine Dollard ‘88 was Denison as an undergrad, another big change was implemented. The celebration was generally held on a Wednesday in the spring semester, but since many students would skip either their Monday and Tuesday, or Thursday and Friday classes to go off campus, it was changed to Friday.

In addition to the playing of the “Tiger Rag” and the freshman-sophomore Tug of War, there were other events that were featured at one or more D-Days. One such event was the Inter-Fraternity Tricycle Championship – a 25 lap race around Fraternity Loop. Intramural sports events, campus wide picnics, and bonfires were also popular events. D-Day 1959 became the first day that beer was legal on campus. Students started imbibing a little after 8 p.m., and by midnight had consumed an incredible 30 kegs. Another popular event was the greased pig chase of 1956.

In the 80s, Dollard remembers D-Day featuring a pig roast (luckily, they didn’t have to catch it first) hosted by the Delta Chi fraternity at what is now Sunset House. The road in front of the house was shut down for the day, and people sat on the hillside and listened to bands play.

Of course, the main musical event has been an integral part of nearly every D-Day. However, Woodyard, who has seen nearly six decades of D-Days come and go, has noticed a major shift in attitudes toward entertainment, and as a direct result, student turnout at the event. “You have to keep in mind that there wasn’t a divide over what constituted good music. In the former times, there wasn’t a range of tastes, and so everyone went to what was on the board; there was virtually no diversity.” He stressed that the campus was much more unified; essentially “1,000 people moving as a whole,” to every event, including sports games, and of course D-Day.

Fast-forward to a little over a hundred years from the first D-Day.

Upward of 1,500 students – more than the entire population of the university in 1909 – gathered at the Mitchell Center on Friday to set a record-breaking number of attendees and to party with headliners Hoodie Allen and Matt & Kim.

“I think that it really brought the campus together, the only time you see a turnout that high for an event is maybe during the opening ceremonies of Naked Week,” said senior French major Mia Manfredi, of Chagrin Falls, Ohio.

D-Day 2013 was a huge success (see our review in the Arts and Life section), but most people don’t realize that an event on this large of a scale doesn’t come together overnight.

Since the beginning, the event has been put on by students, for students. This year was no different. Women’s studies and communication double major Paige Robnett, and economics and cinema double major Deniz Aydogan, both seniors, served as co-chairs for the D-Day committee. Robnett and Aydogan chose the rest of their ten-member committee last March.

One of their main goals was to have the artists booked before returning to campus for fall semester. Facing student criticism from the past few years about the artists that it brought, the committee had to choose performers who they believed would put on a “solid, energetic performance” and appeal to the widest audience – and keep within their $80,000 budget. After much deliberation, the committee finalized plans in June and July for indie/pop duo Matt & Kim and New York City hip-hop/rap artist Hoodie Allen, both based in New York City.

Another challenge they faced in choosing the artists was the absence of Robnett, who was studying abroad in Copenhagen, Denmark. Essentially all of the communication about who the artists would be took place over social media – a medium that wasn’t even in existence even ten years ago.

The featured artists weren’t the only puzzle piece that the committee had to fit into D-Day 2013. Several other campus organizations approached the committee about using D-Day as a medium for promoting their own cause. “It’s an all-inclusive event, and that is what is so cool about D-Day. It literally excludes no one, and tries to bring people together,” said Robnett.

Luke Romick ‘16, a communication major from Lebanon, Ohio, reached out to the committee because his organization, the Thirst Project, is just getting off the ground, and he thought that teaming up with the large, well-established D-Day event could make a big difference. Romick describes the Thirst Project as a non-profit organization that builds clean-water wells in third-world and developing countries. It has over 300,000 volunteers and is active on over 300 campuses. By associating his organization with the D-Day festivities, he hoped to gain awareness from the student body, raise money for the Thirst Project, and add another cause to the event by including a service aspect.

Kappa Kappa Gamma also got involved. They took advantage of the extra traffic on the Campus Commons and held their Kappa Kornhole event, an extension of their annual service project Kappa Karnival, during the festival.

Dollard mentioned that this year would be a prime time to try and recapture some elements of old D-Day tradition. “As a historian, I know that rituals are important, and can contribute positively to a sense of community identity,” Dollard said. “The student body now is engaged on multiple levels, and diverse in their interests, and of course busy, so any ritual that seeks to bring us together is terrific.”

In keeping with the inclusive spirit, Robnett and Aydogan felt strongly about continuing the tradition that they helped start last year, the lip-dub promotional video. The video, which involved over 300 students from different campus organizations and featured President Weinberg, revealed the headlining bands. The featured artists will forever be the mystery of fall semester and the center of campus rumors.

Robnett said that the lip-dub was more stressful to plan than the actual concert. Robnett and Aydogan coordinated, choreographed, and controlled what could have been pure chaos, especially with the entire six-minute long video as one continuous shot. Luckily, everything that could have possibly gone wrong went wrong during the practice run, and the video was a success, reaching over 8,000 views before Friday’s events.

Natalie Pariano, director of the Campus Leadership and Involvement Center and advisor to the D-Day committee, felt that the lip-dub was a great way to help the event grow and evolve. “You could see a new sense of enthusiasm building around the event,” Pariano said.

The committee considered bringing back other D-Day traditions such as the all-campus Tug of War and a day of cancelled classes, but logistical reasons kept them from being possible. Instead, they chose to focus on one new event that they hope will be the beginning of a tradition that students will cherish for years to come, a festival of student musical performances.

…and establishing new ones

Leading up to the big concert, 16 student groups — singers, songwriters, rappers, and dancers — came together for a festival, to kick-start a new D-Day tradition.  Robnett described the motives for putting on the festival.

“The tradition of D-Day that we were trying to reclaim, the community aspect that we feel hasn’t been well done in the past years – these were the reasons for implementing this music festival. And we both feel that there’s no better way to bring people together than music. So by highlighting these student bands and performers we think that it’s going to be a huge community-building event, and a really good celebration of campus spirit.”

Ahmed was the committee member in charge of planning and executing the four-hour festival leading up to the big event in Mitchell on Friday. He organized a balanced lineup of performances, and kept the show moving along on schedule to keep the interest of the students who braved the unseasonably cold day to have some fun and support their peers.

“I thought that the festival was a great addition to D-Day because it allowed us as students to bond over the talent of our peers,” said Manfredi. “People always talk about academics and pride our school on that, but we also have so many creative people who had the opportunity to be recognized and appreciated yesterday.”