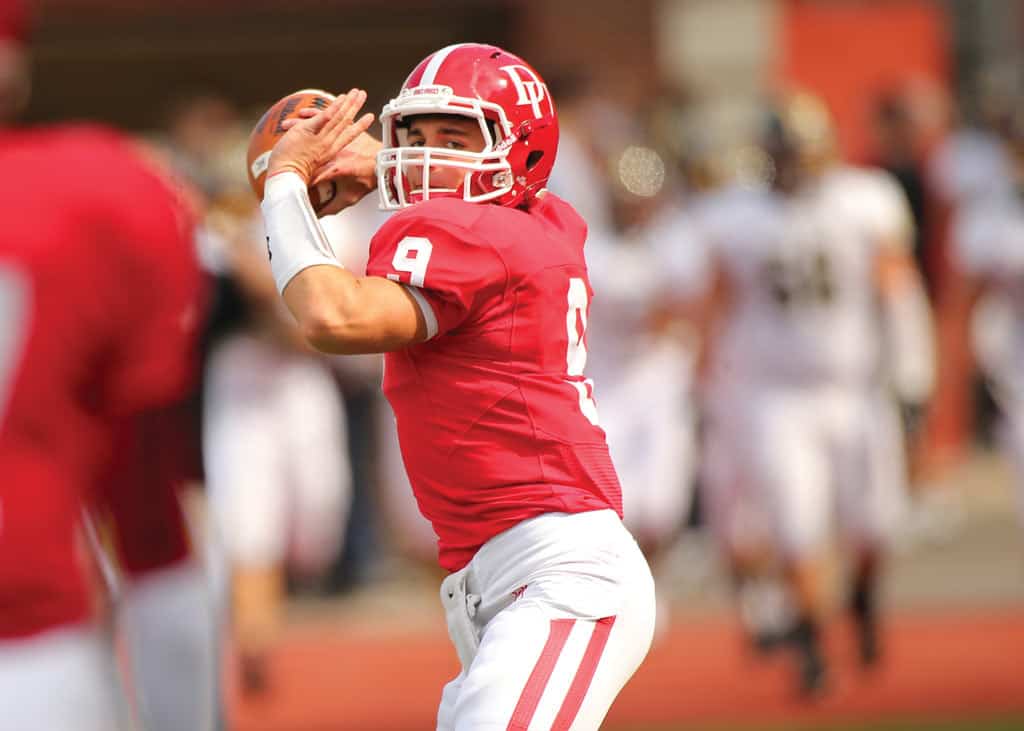 With only 32 seconds left in the fourth quarter, 20 yards away from the end zone, and down seven to embittered rival Ohio Wesleyan, the Big Red had to act fast.

After a smart drop back and quick read of the defense, junior quarterback Brandon Sklenar whipped the ball to sophomore DuShaun Brown for a touchdown, keeping Denison’s chances of winning alive and well at Ohio Wesleyan University.

In a thrilling double overtime matchup, Denison would best OWU, winning the game 47-41 thanks to a  25-yard touchdown run by Sklenar and a 13-yard rushing touchdown by junior Colin Morris.

Due to his stellar performance, Sklenar received the North Coast Athletic Conference Offensive Player of the Week, a prestigious honor showcasing the best offensive performances throughout the entire NCAC on a weekly basis.

As if his performance weren’t enough, Sklenar would go on to dominate against DePauw the following weekend, completing  23-28 passes for 292 yards with four touchdowns. He also rushed for 41 yards, two runs resulting in touchdowns in Denison’s 42-21 thrashing of the Tigers.

For this performance, Sklenar was once again awarded the NCAC Offensive Player of the Week award.

Even more impressive, Sklenar also leads his team in total rushing yards with 346. Clearly, Sklenar has demonstrated his ability as an athlete.

In only six games, his time as both quarterback and running back has resulted in 16 total touchdowns.

“I think Brandon is doing a great job,” said senior Teddy Kuntz. “Obviously physically he is a talent that does not come along everyday.”

Denison currently is sitting pretty with a 4-2 record. Having already matched their win total for all of last year, the team is eager to expand on this early season success under the capable arm of Sklenar, who has impressed everyone from fans to his own coaches.

“There’s a lot he still has to work on, but you can tell he is a special player, and we are really excited about the progress made so far,” said first-year offensive coordinator Austin Holter.

As for Sklenar himself, he is just happy to help the team and keep on improving.

“I’m honored to have been selected Conference Player of the Week for two consecutive weeks,” Sklenar said.

“It’s an accolade for our entire team, not just me. It shows that we have a lot of talented guys that know how to perform in big games. We’re having a solid season as a result.”