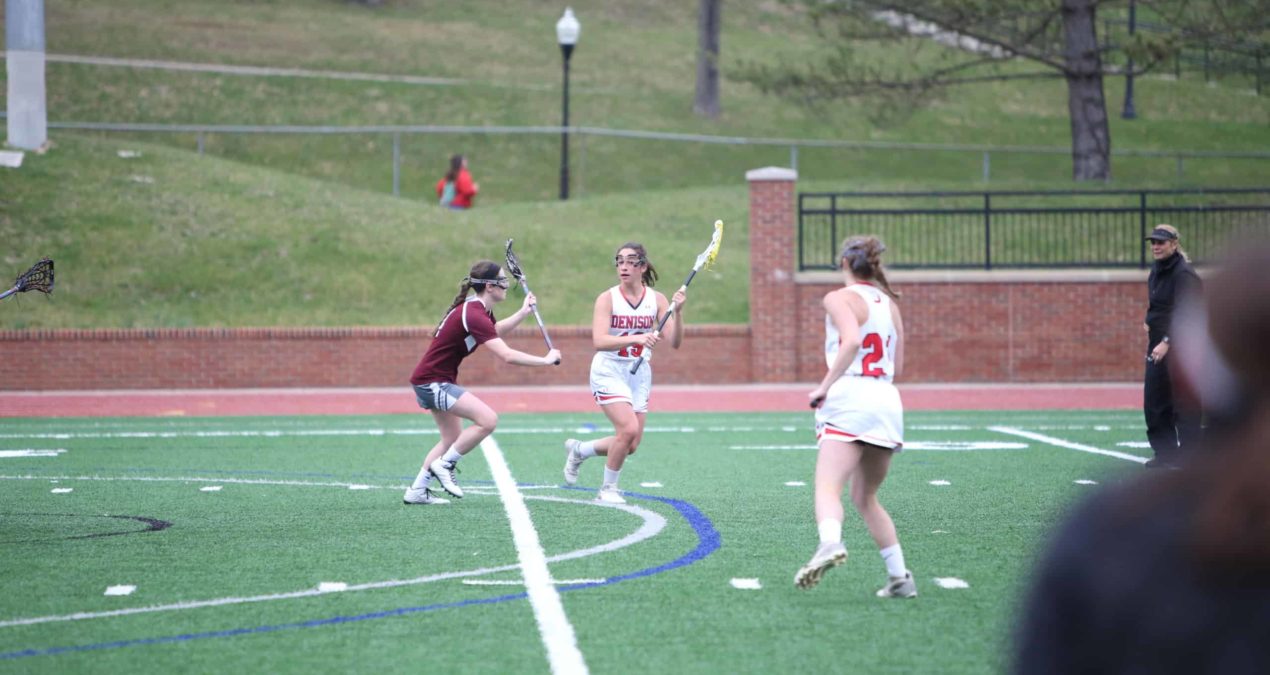 Just 14 seconds into the first half of the game, Reid Hirschey ‘17 assisted Leah Israel ’18 for a goal. This goal marked the beginning of a successful match against Alma College.

After returning from a spring break trip to Puerto Rico, Denison outplayed the Scots, 19-2 in their home opener on Wednesday, March 23. With this win, the Big Red advance their season to a record to 3-4.

Claire Ludlow ‘17 brought the score to 2-0 just 15 seconds after the first goal by Israel. Then Claudia Rafi ’18 shot successfully with 27:35 left in the first half, after being assisted by Carol Allen ’16. The Big Red didn’t stop there. In the next five minutes three more shots were made by Allen, Hirschey and Annie McMahon ’17 to advance the score to 6-0.

Laura Van Horn ’16 saved all of Alma’s attempted goals in the first 20 minutes until the Scots made their first shot with 11:50 left on the clock.

McMahon assisted Allen for her second goal of the game at 8:45. Israel and Lizzy Pellicane ’16 completed their free position shots and Colleen Muldoon ’19 and Rafi each added a goal bringing the Big Red to a 14-1 lead at the half.

Van Horn’s aggressive defense helped keep Alma’s offense contained. Alma scored their second and last goal of the game in the 12 minute of the second half.

Prior to that goal, Israel assisted both Rafi and Halle Walsh ’18 for a goal each. Briana Alberghine ’19 and McMahon also added a goal a piece in the second half.

Alma’s offense picked up speed, but Van Horn’s time in goal and the rest of the Big Red team continued to press tough defense on the Scots.

Denison’s final goal came from Muldoon with 6:40 left on the clock. The game ended in the Big Red’s favor 19-2.

As a defender Emily Marlatt ’18 said there wasn’t much action on her end but offensively Denison was able to run plays well and connect with each other to find open shots.

“As a team we have been emphasizing focusing on the little things like ground balls and clean passes,” Marlatt said.

With a competitive pre-conference schedule the Big Red is hoping to take what they have learned from their first few games and come out strong in conference play.

Denison will play away against league opponent Wittenberg University, on April 2 at 12 p.m.