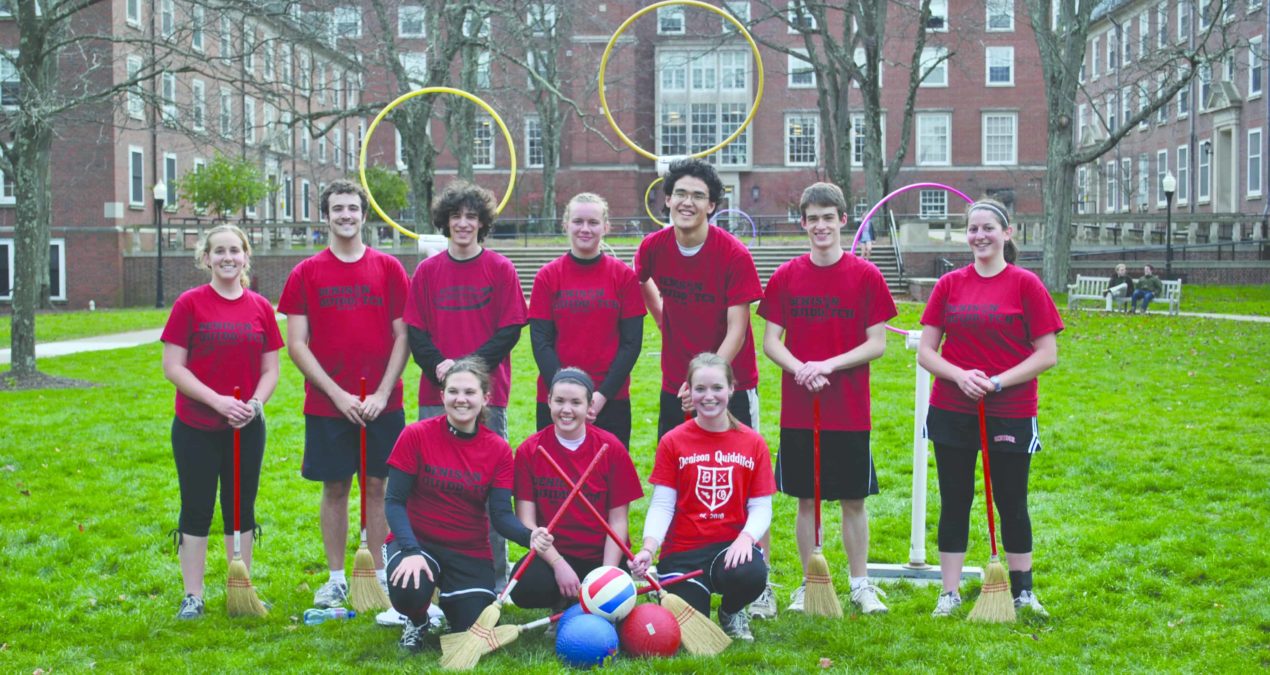 Of the thirty-three club sports that Denison University has to offer, quidditch may be one of the most unique. Denison alums Jen Nygren ’12 and Liza Raino-Ogden ’12 introduced the sport to the school in 2010.

According to the International Quidditch Association website, Xander Manshel founded quidditch in 2005 at Middlebury College.

The sport is based off of the popular game played by wizards in J.K. Rowling’s Harry Potter series.

It is now contested at college campuses in the United States, Canada, Australia, the United Kingdom, Italy and France.

Quidditch is a co-ed contact sport that mixes elements from rugby, soccer, football, dodgeball and tag. Each team is made up of seven players who play with brooms between their legs at all times.

Unlike Harry Potter and his friends from the wizarding world, student athletes do not “fly around on brooms.” Quidditch is played on the ground.

Each team has three chasers, two beaters, one keeper and one seeker. The chasers run around a field attempting to score goals worth ten points each with a deflated volleyball called the quaffle.

The keeper defends the goal hoops and the two beaters use dodgeballs, or “bludgers” to knock out members of the opposing team.

If a player is hit by a bludger, they are out of play until they touch their own goals. The seeker tries to end the game by catching the snitch, which is worth thirty points.

In Harry Potter, the snitch is a small and fast golden ball with wings that flies around a quidditch pitch. However, in the “Muggle” world, the snitch is actually an impartial athlete, usually a cross-country runner, wearing all yellow.

“The snitch does not want to be caught by anyone so there’s no political-ness,” Gillum said. “The snitch is really funny because they can climb trees, they can ride a bicycle, they can hop on a car, they can go into a dorm; the snitch has hardly any rules so it’s really entertaining watching the seekers trying to catch the snitch.”

The snitch has boundaries; for the first five minutes of the game the athlete can go anywhere but afterwards they have to come back to the playing field.

There are currently ten members on the Denison Death Eaters.

The team competes against Miami of Ohio, Ohio State University and Bowling Green University. In addition, the team has played at Purdue University.

The Denison Death Eaters made an appearance at the Mid-West Regionals last fall. “[Our main goals this year] are to get more exposure on campus and to get more members,” Gillum said. “Our participation has been really low so we’re trying to get more active people.

Sophomore Rebecca Fritch said that her favorite part about quidditch is that she has “learned that winning is not the most important thing. It’s about the competition, about trying your best, improving and having fun.” Fritch also highlighted the community aspect of quidditch.

“It’s a wonderful feeling to know that there’s this huge community that exists and loves the same things you do and are unashamed of expressing it, no matter how many weird looks we may get.”

The team receives funding from the Denison Campus Governance Association and is registered with the International Quidditch Association.

Since the team’s founding in 2010, it has evolved into a legitimate sport. “We know what we’re doing more now. Ben [Flox] and I have been on the team since our freshman year and we know more about quidditch outside of Denison,” Gillum said. “We know that it’s more athletic and less of a Harry Potter fan club.”

Aside from that, the team remains relatively unchanged.

“We’re still a small team, and we still use the same field and most of the same equipment, but we still love the sport, and we love our little team. We don’t take the sport too seriously, but we certainly play hard,” Flox said. “We go into every game with a mindset to play our best, and I am always proud of how our team plays. We communicate well, and we work as a group, and even though we may not win we can always be proud of the fact that we played our best.”

The quidditch team practices on Wednesdays from 7-8 p.m. and Sundays from 2-3 p.m. Practices are open to anyone who wishes to join, regardless of athletic experience.