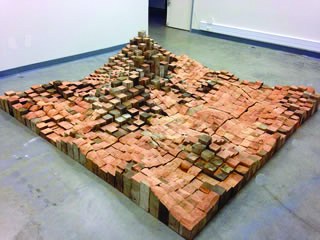 By Sara Shore, Special to The Denisonian

Years of hard work are paying off for senior art major Hunter Hughes, who was recently chosen as one of six recipients for the Association of Independent College and Universities’ Award for Excellence in the Visual Arts (EVA).

Hughes, a senior studio art major from Grosse Pointe, Mich., began his work with sculpture at a young age; he attended and eventually instructed at a boat-building school in Maine.

As he continued to grow in his artwork, Hughes became one of the ten senior art majors at Denison, and his nomination for the award came from the university.

“My art exists to be interacted with,” says Hughes. He recently took over Bryant’s gallery with a few of his pieces, including a charcoal tunnel of sorts as well as his rendition of an airplane engine.

As he whittles a small chunk of wood from the ground of his studio, Hughes says that wood serves as his favorite medium. A tour of his workshop showed some of his more recent pieces, including the beginnings of a sculpture that Denison has personally asked him to create for a dorm in East Quad.

In addition to pieces of a few other mediums, Hughes’ wooden pieces can be seen throughout the Bryant Arts Center, including two of the artist’s more elaborate pieces which decorate the outside of the building.

When asked about his inspiration, Hughes responds with a simple answer: “Inspiration comes from busy hands.”

Hughes says that the process of creation is important and he enjoys the laborious process of making artwork. He also offers some advice to those who are trying to improve their own artistry.

“Have confidence in what you do,” says Hughes. “Creating art is a vulnerable process, and ultimately you are your biggest critic, but it is self-rewarding, so embrace it.”

After Denison, Hughes hopes to travel and see art around the world, and plans on a career in architecture.