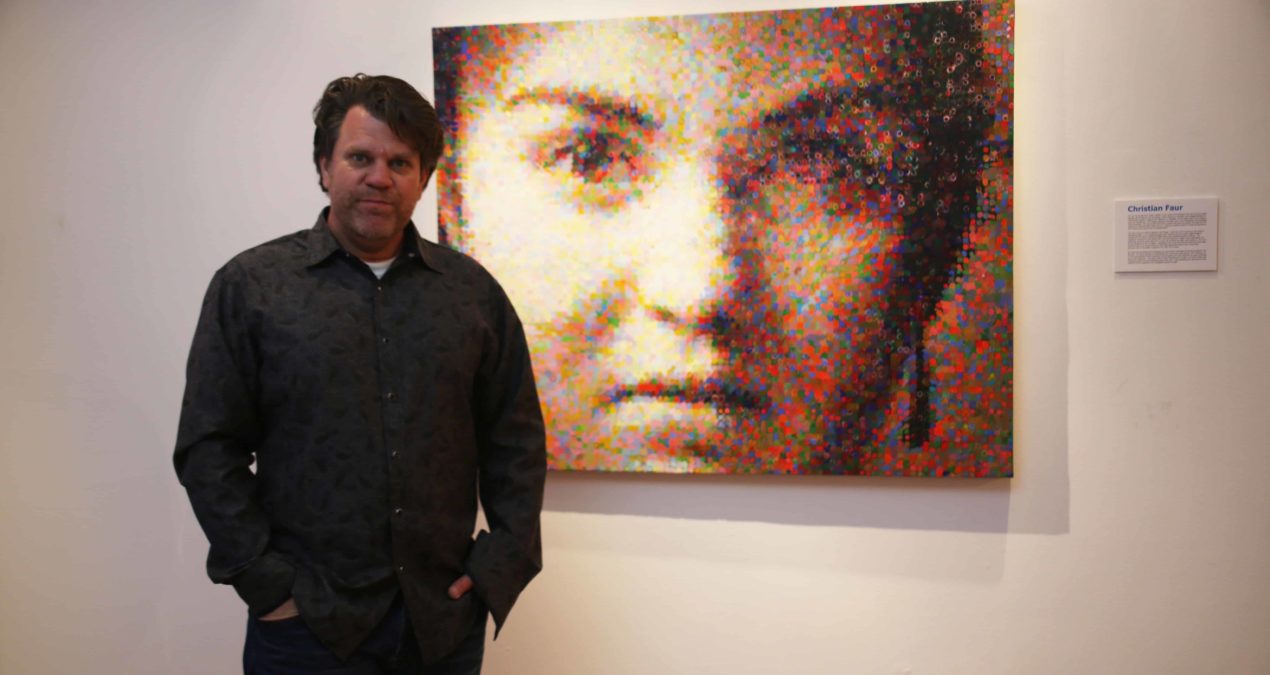 The moment one enters Christian Faur’s office in Mulberry House, his passion for art becomes clear. His walls bear a few pieces of his own colorful wax work and the office itself contains everything from a camera on a tripod to a microscope. Along with crayon art, he also does encaustic painting, which involves using heated wax with colors added to it, and oil painting.

Faur also created a color alphabet with 26 colors representing the different letters of the alphabet. His background in science came through when he developed artwork where colored horizontal lines served as letters, and he used the wavelength of when he spoke the words in the piece to decide on the width of each line.

Faur’s work shows a rare blending of technology and art which is reflected in the position he holds as Director of Collaborative Technologies for the Fine Arts.

Faur was born in New York and came to Denison in 2001. He came from an impoverished background and went to the military for three years to pay for his education, before graduating with a Bachelor of Science in physics from the California State University, Northridge.

When asked why he didn’t pursue a degree in the arts, Faur said the difficulty in finding a job played a big factor, along with his reluctance to have to create art on demand. He was concerned about sacrificing his vision for a job. Faur says, “You’d be creating art for someone else and I always thought it was for me…but by going into an area that was just the opposite of art, it really gave me a more liberal, more rounded background so that I could apply the math and the physics to my art making and my artistic concepts to the way I see mathematics.”

Faur’s crayon art, which he started in 2007, has actually been inspired by the way pixels make up an image. “I’m really familiar with using pixels and you know how you can zoom really close into photographs and really see the pixels? I tried to find a way to get a more photorealistic look,” he said. A Christmas gift of crayons for his daughter became the catalyst for his artwork.

“I opened up the box and it just clicked because here were these little wax pixels, exactly the right thing for me to use. So I started from scratch, created molds, got the pigmenting right and after I did all that, I created a piece and was super delighted because it turned out exactly how I had hoped.”

Faur starts his work by creating and manipulating it in Photoshop to figure out the colors he needs. Every crayon in his work is created from scratch because he finds the 128 colors offered by Crayola too limiting, especially when he needs colors that differ just by a shade or two. In four days, Faur is able to create his crayons and a 1×1 piece that consists of 2000 crayons spaced out perfectly. Some of his pieces use as many as 120,000 crayons.

“It made a big splash,” he said, referring to the crayon art. He was featured in Wired Magazine in the UK. He also has galleries displaying his work in London, New York, and Columbus.

You can also see Faur’s creative work at the gallery inside Mulberry House.