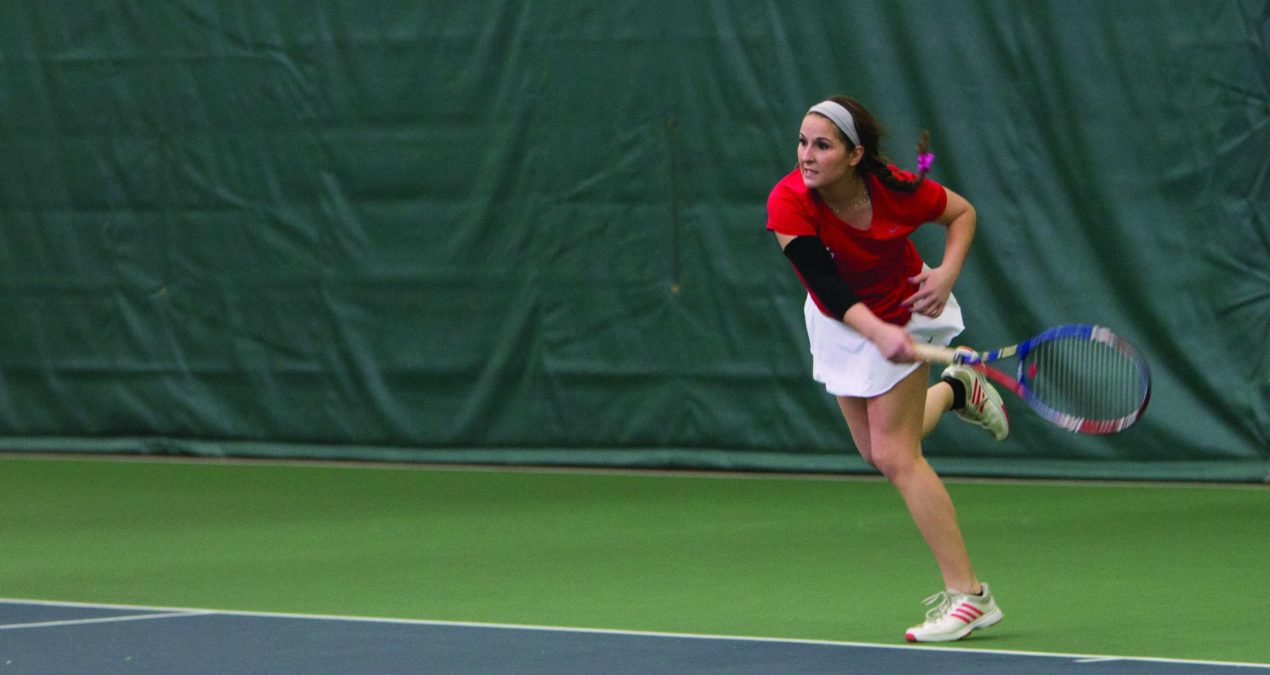 After a tough start to the season, the Denison Big Red women’s tennis team has gone on a two game winning streak with wins against #16 Whitman and conference rival Ohio Wesleyan (OWU).

Despite the 7-2 defeat, Geppner ‘14 felt that the Big Red was very competitive against Tufts.

“The match against Tufts was a solid, hard-fought match all the way to the end. We had been improving and getting so much better throughout the week, and we had long, close matches all the way down the lineup. In the end, they pulled out a couple more victories than we did. We were right there,” said Geppner.

The last match of spring break was against #16 Whitman College. Prior to this match, Denison was coming off of a five-match skid.

The Big Red was able to pull off the upset against Whitman with a 6-3 victory.

The doubles competition also included two victories out of three matches for the Big Red by the team of Geppner and Hawkins (8-3) and the team of Schechtman and Holloway (9-7).

The upset victory over Whitman College was a strong finish to spring break for the Big Red.

“I think we took that loss [and the other losses earlier in the week], and really came together as a team and fought for each other. That Whitman match was truly a team win. We all fought so hard, and it was awesome to see us end a great trip with a win against such a great opponent,” Gepner said.

Feeding off of the momentum from the Whitman match, the Big Red traveled to Delaware, Ohio to shut out the Battling Bishops in tremendous fasion, 9-0.

The Big Red didn’t give up a single set in the singles competition against the Battling Bishops, and Geppner and Hawkins continued to dominate the doubles competition.

“We kept that momentum to our win against OWU as well, and hopefully we will continue to improve and carry those wins with us through next week and next weekend in Madison,“ Geppner said.

An important fixture for the team has been the doubles team of Geppner and Hawkins, which has a 9-5 record.

“I think the reason that Taylor and I make such a good doubles team is our chemistry not just on the tennis court, but off the court as well,” Geppner said. “We are great friends outside of tennis and I think that definitely carries over through our doubles play.”

Geppner continued, “[Taylor] is such a strong player, and I am excited for her to be a great leader on the team, which she has already proven to be. I am looking forward to the rest of the season, and hopefully we will continue to be as successful as we have been.”

The Denison Big Red will look to continue its winning streak when they travel to Gambier, Ohio to play their archrival, Kenyon.

In her fourth and final year at Denison, Geppner expects the Kenyon match won’t be easy, due to past experiences.

“Kenyon has always proven to be a tough competitor, and so we will need to be focused and confident in order to get the W.”

Students Come Together in Celebration of Jewish High Holidays

Unequal work for equal pay: the problems with work study