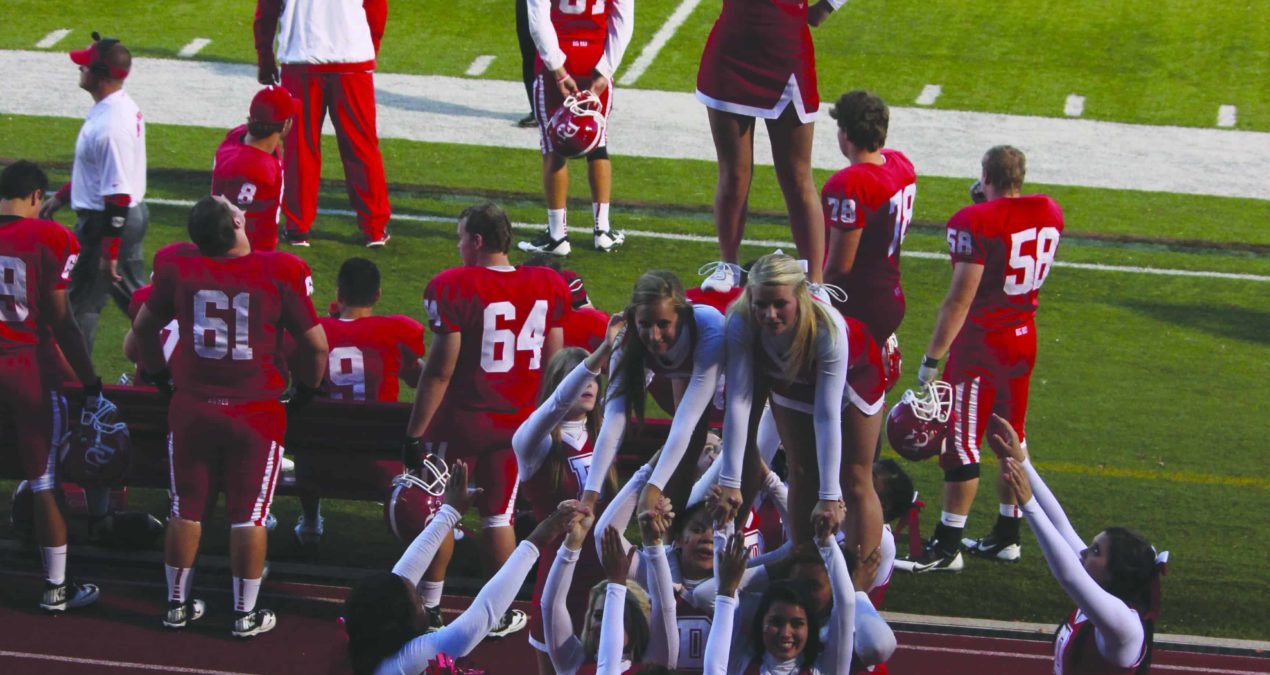 What makes a varsity sport a varsity sport? Is it the time commitment, the skill, the hardwork? Because, if it is, then cheerleading should be considered one.

A major difference between varsity and club is the source for allocated funds. Varsity teams receive financial support, equipment and facilities from college and university athletic department budgets.

Universities often allocate club sport budgets through student life departments similar to other clubs on campus. Because club sports cost more than other clubs, many club student-athletes must pay “pay-to-play” fees and also engage in team fund-raising efforts to pay for facilities time, equipment and other team expenses.

For many club sports, the road to becoming a full-fledged varsity sport is long and winding, and for some clubs, never ending.

What was once an “I play because I love it” becomes a full commitment, spending many hours honoring your craft, building your team to its highest potential and competing with other universities and colleges in the region and around the country.

For many clubs, this is a jump that will never be reached, as there may be too many hurdles, or just not enough interest within the group to make that transition.

This, however, is not true for the Denison University cheerleading team, which is fully embracing the idea of being recognized as a varsity sport.

The purpose of the Denison University cheerleading club is to provide students with the opportunity to grow, learn, lead and experience athletic activities.

They promote and uphold school spirit, develop a sense of sportsmanship among the students, as well as build better relationships between competing schools during all athletic events and develop a stronger sense of responsibility as individuals and leaders.

“One of the best takeaways of cheering is increasing school spirit around Denison,” cheerer Kirstie Rodden ‘16 said. “I love going to Denison and supporting the different sports teams and cheering is a great way to get further involved in that.”

The cheerleading club faces challenges, however. Their practices are limited to two days per week, making each and every minute spent in the gym valuable, as those hours become more valuable, the less frequent they are.

Because they are not provided transportation to athletic events, cheerleaders band together and drive to the games using their own cars.

As a club however, they do not make the trips to games that exceed over three hours of driving time. These challenges, and the eagerness to get through them, are something else that really fuels the desire to become a varsity recognized sport.

“The transition [to varsity] would make other people on campus see us more seriously and realize what we cheerleaders do around the school is necessary to increase school spirit, and would overall make the cheerleading team more committed in what we do,” Rodden said. “We would also probably get to more away games, which would be a great way to support the football and basketball teams in games that take place off campus.”

The process for becoming a NCAA sanctioned sport is unfortunately not as easy as accumulating a lot of participants or petition signatures. It requires years of work, committed players, participants, and universities, and a high degree of coordination between schools.

However, there is reason to be optimistic that at Denison the process can be cut much shorter.

The squad already attends every home game, and local road games, such as trips to Ohio Wesleyan University and Wittenberg University.

With proper funding and transportation, the cheerleading squad could see a rise in practice time, allowing themselves more time and attempts to perfect the things they work so hard at and also a more conscious effort in providing transportation to the farther games on the athletic schedule.

Something important to note would be that if Denison were to announce the transition of cheer-leading from club to varsity sport, they would be the first team in the North Coast Atlantic Conference to do so, as the other nine colleges and universities also have cheerleading as a club sport.

Denison has never been an institution afraid to break the mold, in academics or athletics, so it would be an interesting conversation to have regarding the future of an athletic team that is already featured so much, but not fully recognized for all that they do.

This transition however, could take the full term to complete, possibly happening years after the students already on the team are done and graduated.

This won’t stop them from pursuing this goal, however, and from encouraging students in the future to partake in what they consider such a fulfilling and fun experience.

“Cheering is a great way to get involved on campus and meet new people that you will become very close to during your tenure at Denison. If you’re thinking about trying out, whether you have ever cheered or not, do it! The team is such a great group and cheering for Denison has been a truly positive experience for me, and for the rest of my team.”

Words of a student athlete, one of many who should get recognition for what she, and her teammates, bring to DU.