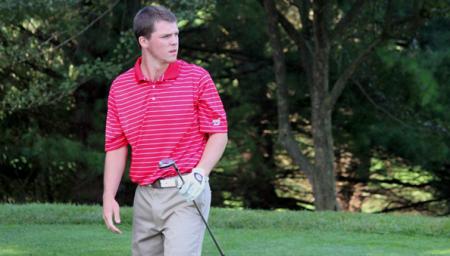 Two weeks ago, while most of the student body spent their spring break soaking up sun on the beach, Denison’s men’s golf team used their break to compete in the Myrtle Beach Shootout at the Barefoot Golf Resort.

But the less than ideal weather conditions, that didn’t faze the Big Red men.

Denison ended up placing third overall out of four teams on the trip that week. Denison’s lone senior Aaron Klimchuk finished the day with a tie for second overall, and a final score of only 3-over par. Klimchuk’s final score totaled to 75, the lowest for the whole team.

At the end of the tournament, Slovitt finished in a three way tie with a total of 80 shots.

Close behind him was freshman Jon Taylor who shot an 81 that day and sophomore Rich Van Voorhis with a score of 82.

The Big Red’s final score was rounded out by Ben Cole ‘16 and Alex Geanakos ‘15 who tied with a score of 85.

Even though the team didn’t score as well as they had all hoped; they still found the trip to be extremely beneficial for their season.

“The spring break trip is a great time to get closer to the team and continue to build strong relationships with the other guys,” Slovitt shared.

“It’s when the underclassmen strengthen their relationships with coach and the older guys on the team. It’s hard for me to pinpoint one thing that was the best [part of the trip]. I’d have to say simply doing something we love with friends for a whole week was the best part.”

Since returning from spring break the team saw the tournament as valuable practice, and now they are ready to start their official season.

“I feel like there is some new energy that we haven’t had the last few years around this time. Every year we have the same goal heading into the spring season and that is to compete for a NCAC championship,” said Slovitt.

This year, however, Slovitt says the team gets their newfound energy from one of their own legends, who is graduating.

“We are graduating one of our better players, Aaron, so we want to have him end his college career with a NCAC title,” Slovitt said.

And yet, Slovitt also feels as if the friendships are tighter than ever.

“This year our team is closer than previous years which should help us out this spring. We have a good mix of personalities which makes the road trips more enjoyable,” Slovitt explained.

The next time the Big Red men hits the course will be next weekend against OWU in Delaware, Ohio.

The following weekend of the 12th, the men will be back in Granville competing in the Ted Barclay Spring Invitational, so come out and cheer on the Denison men.