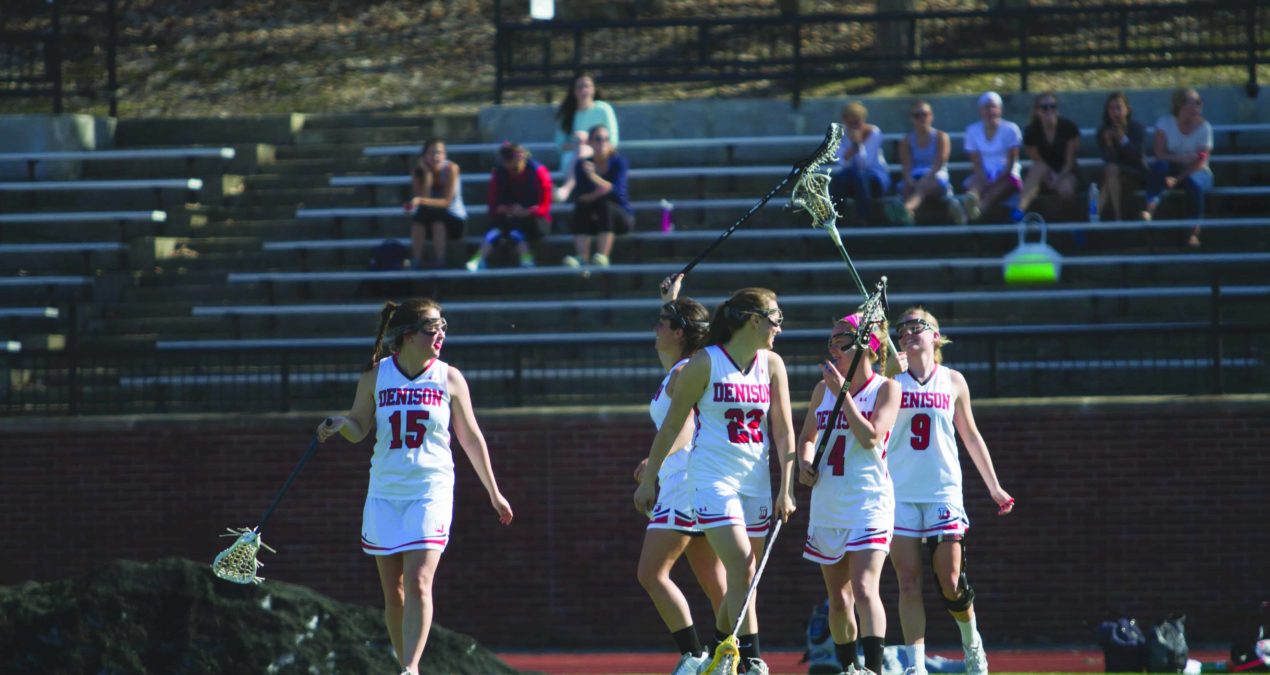 Coming off of a three game winning streak where the Big Red women’s lacrosse team dominated the opposition which included DePauw, Centre and Ohio Wesleyan by nine or more points, the team was looking to finish the season strong against some difficult conference opponents.

The Big Red faced the Fighting Scots of Wooster on April 15. Despite Wooster’s 2-7 season record (a major step back from last year’s 13-5 record), the Fighting Scots were off to an impressive start. Wooster led the Big Red 5-4 after the first half. Three of those five goals were scored by Wooster’s Ellie Hudson-Heck.

Yet, the bitter taste from the first half did not carry over into the second as the Big Red scored another nine goals to the Fighting Scots’ four to win the game, 13-9.

Allen was happy that the team was able to win this game, especially with the surprising presence of snow in April.

“It was really exciting,” Allen said. “The game is always really rough because of the emotions that go into it, so it was good that we won by that much.”

Allen continued, “It was cold and no one was super prepared for it, but we were able to come together and put on a great show.”

The win against Wooster elevated Denison to second place in the conference right behind Wittenberg, who they matched up with on April 18.

The Wittenberg Tigers are usually one of the top teams in the NCAC each year. The last two seasons they have won 12 games.

This game was important because the winner would also come in first place in the conference, and could possibly host the conference tournament.

“Everyone is a little nervous, but we are all excited at the same time,” Allen said. “That’s one of [our] big rivals. Every year we know that they are going to be one of our biggest competitors. They always come out strong, so this is our opportunity to prove that we can beat them.”

The Big Red was given the task of stopping Wittenberg’s Logan Warye, who ranks top five in the following categories: points (69), assists (19) and shots attempted (100). Denison relied on goalie Laura Van Horn ‘16.

Wittenberg started the first half with three goals in the first three minutes.The game was a shootout until the very end. The Big Red and the Tigers entered the second half with the score locked at 7-7.

However, midway through the second half, the Tigers went on a 3-0 run, giving them a 13-10 lead with just under 19 minutes remaining.

To make things worse, the next five minutes of regulation only consisted of one score for each team, making the score 14-11.

Keller scored a goal at the 13-minute mark that sparked a 3-0 run, which included goals scored by Powel and Hirschey. Hirschey’s goal tied the game at 14-14 with 9:14 left.

Over the next six minutes, the Big Red failed to even attempt a goal, leaving them vulnerable to the Scots’ attack. The final dagger came when the Tigers’ Megan Loofbourrow sliced one in from eight meters out with 3:28 remaining. The Big Red made three attempts at tying the game after this, but were unable to capitalize on any of them.

This loss bumps Denison to third place in the conference behind Wittenberg and Allegheny. The women currently have a 9-4 overall record, as well as a 4-2 conference record, with two remaining games against Kenyon on April 23 and Hiram on April 26.