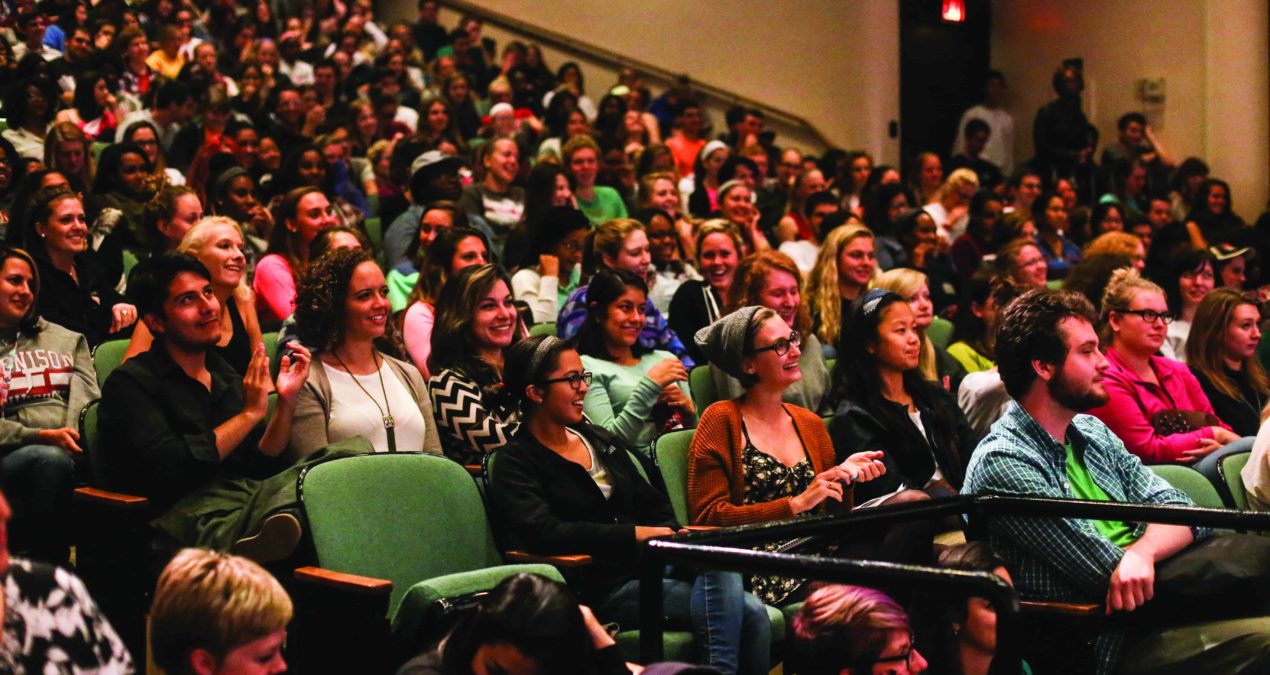 Sex sells, even when it’s free, if the turnout for “I Love Female Orgasm” is any indication. As early as 30 minutes before the event began, it became clear that students would have to squeeze rather closely into the Slayter auditorium to hear the message of sex educators Kate Weinberg and Marshall Miller praising the wonders of “the Big O.”

Female O came to Denison’s campus two years ago, and was so well-received it was brought back for a second round this year on Sept. 15, sponsored by the Center for Women and Gender Action and the Whisler Center for Student Wellness.

Weinberg and Miller began the evening by telling of the program’s successes, saying they had spoken “over 350 times, to 100,000 people, in 37 states.”

While the program’s title may seem risqué, its content was extremely positive, and encouraged attendees to “make decisions that are healthy, responsible, and right for you,” said Weinberg. A big aim of the program, said Miller, was to promote sexual health and awareness, as well as support a healthy body image.

The program discussed the stigma surrounding talking about women’s sexuality and orgasm, as well a segment where students spoke about ways they felt they could improve their sexual well-being, regardless of whether they were, as Weinberg and Miller joked, “using this information tonight, or years from now.”

The program’s content offered something for everyone, and halfway through the session the program-leaders, split the massive audience into three discussion groups on the fourth floor of Slayter: one for those who identify as women, one for those identifying as men, and a third for those who wanted to keep their discussion coed. The audience was predominantly female, but “there was a good amount of guys there,” noted Farha Khan ’16 of Elkins, W.Va.

Students praised the program, particularly its inclusivity. “I loved the diversity of the audience,” said Gianna Maiorino ’15, a communication and women’s studies major from Chappaqua, N.Y., who works as a program assistant for the CWGA. “Reaching all aspects of campus is so important especially for programs like the Female O, and I feel like people came together around a topic we don’t usually get to discuss. I think people really enjoyed it too!”

“I liked it!” said Erin Katalinic ’16, a psychology major from Columbus, Ohio. “I enjoyed how inclusive it was for all genders and identities.”

Weinberg and Miller closed their discussion by encouraging an open dialogue around sex and students’ bodies, saying it can benefit anyone regardless of gender, relationship status, or sexuality. Weinberg said, “the more we know, the happier, healthier, safer, and more peaceful we’ll all be.”