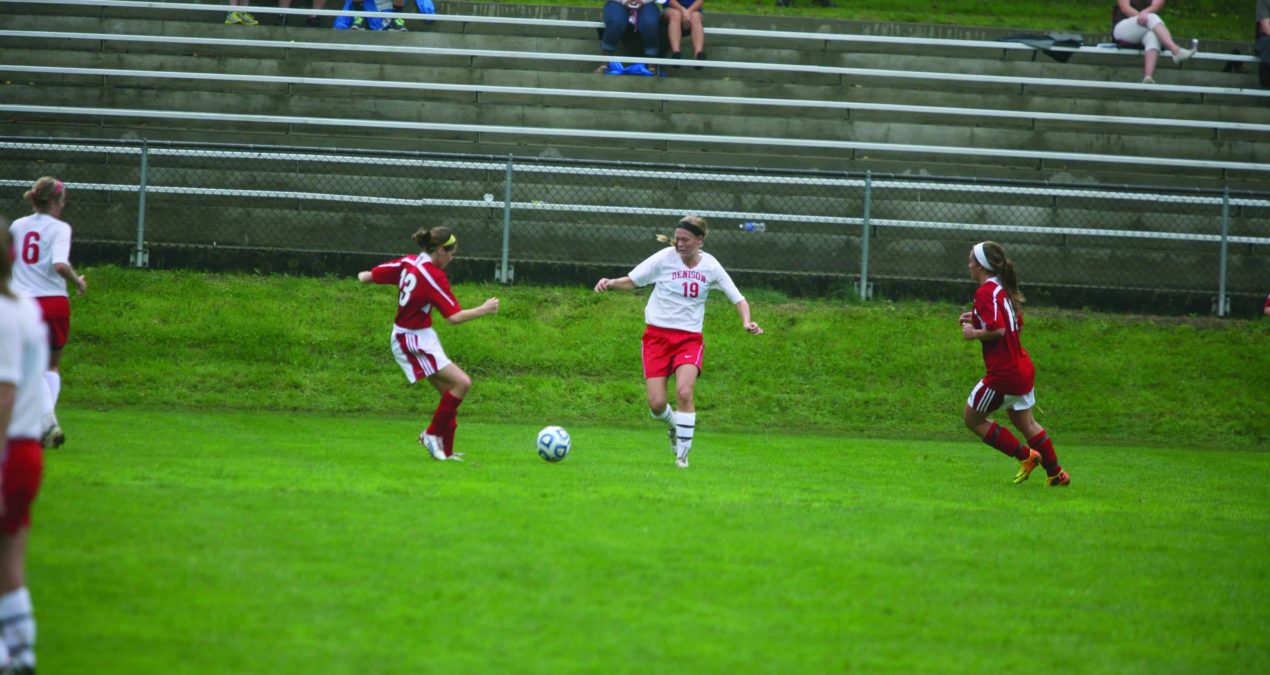 At the end of last season, DU women’s soccer found themselves on the wrong side of a batch of penalty kicks during the NCAC semi-final, ending the season prematurely.

But no such hangover seems to persist throughout the beginning of this season, as the Big Red are now 3-1 with the OT win over Hanover on Sept. 7.

During the 95th minute, Ashlynn Flaherty ‘17 punched in the deciding score unassisted vs. the previously unbeaten Hanover (3-1), making Denison victorious 2-1.

“I feel that we have played well so far; it has been our strongest start in my three years here,” said Andrea Witte ‘16, who totaled three shots and one assist during the last match.

This season has truly been a resurgence thus far, with four returning seniors and eight freshmen lining the pack, as the women’s team has averaged 6.3 goals per win this year.

“We have a really deep team which is a definite strength as well as a team with fantastic chemistry and commitment. I wouldn’t want to be surrounded by anyone else,” said Jessica Skelly ‘17, who has notched two goals and three assists this season.

“One of our objectives is to score as many goals as we can. I definitely think one of our strengths is our team synergy,” Wentzel said.

While it may seem obvious to score as much as possible, the team takes a gunning mentality, allowing themselves to ‘pull the trigger,’ even in situations where it might be the best opportunity, the players explain.

“[It’s about] shooting more and not waiting for everything to be so pretty,” Wentzel said.

This philosophy proved to be gold throughout the first two games of the season as DU notched 17 points when they handily beat Adrian and Manchester at home by only allowing one goal throughout both matches.

“I’m really happy with our play so far, but of course we have so much to work on! I’m excited to see what the season has in store,” said Skelly, who praises her teammates for the early season success.

“I couldn’t ask for a better group of people to be our leaders however we do believe that leadership comes from all class levels which is why we have captains from three different grades.”

“Every one of us plays a crucial role on and off the field and we hold each other to the highest of standards.”

Yet DU did have a slight letdown against #13 Thomas More when they lost 5-0.

One of the glaring reasons for the loss was the apparent inability to put up shots, as they only mustered nine shots in the match vs. Thomas More, whereas in the previous two games, they put up 40 and 28 respectively.

“Because it is the beginning of the season, we are still adjusting to how each other plays and making sure we are clear on communication.  We have a relatively young team so just playing together more will sort out those issues,”  Witte said.

Caitline Cheverine ‘14 also cites the age of the team as a factor for growth, explaining that, “learning how to play and communicate with new players is our challenge.”

Once communication is at full-throttle, Logan Berlet ‘16 believes the team could be unstoppable.

“We play in a very strategic manner, so when we combine that style of play with grit and guts we can play with any team.”