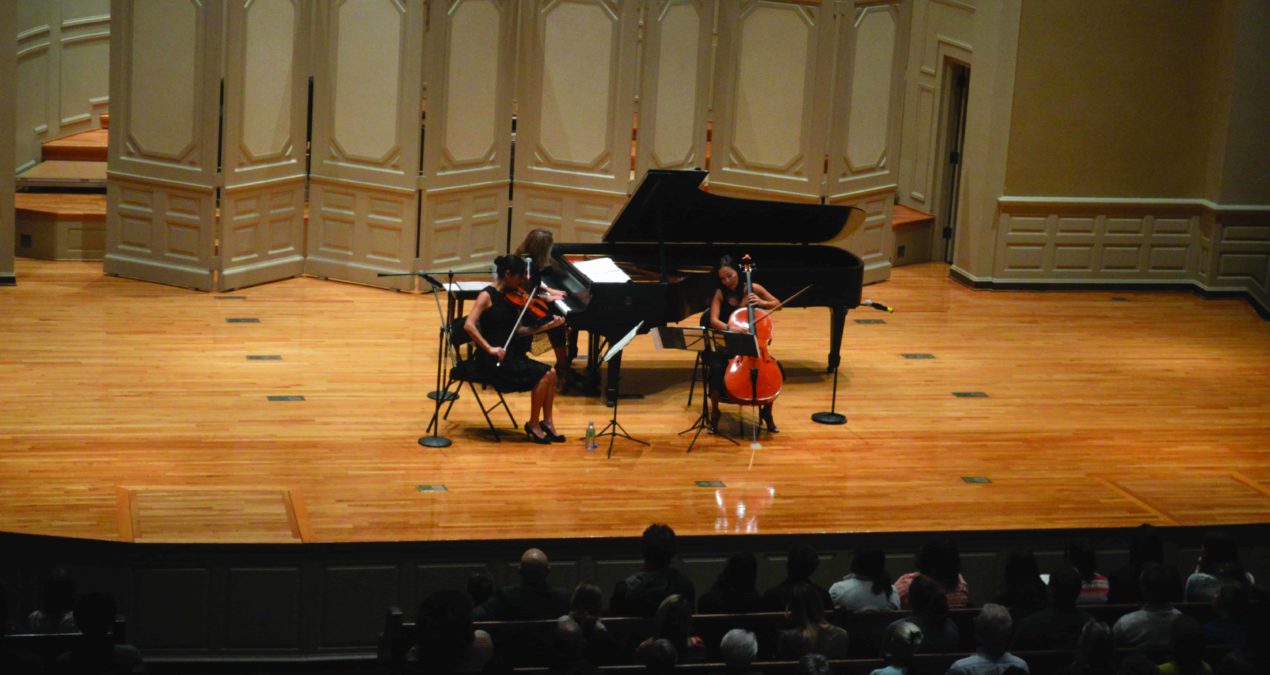 For the final Vail Series performance of the semester, the Ahn Trio provided a mix of classical music and classic rock that made for a pleasant, if not too compelling, evening. A marked departure from the series’ last two performers (Chris Thile and Edgar Meyer earlier this fall, and Bobby McFerrin last semester) the Nov. 7 concert produced a significantly smaller crowd in Swasey Chapel than in previous Vail installments.

Perhaps this is a result of the Ahn Trio’s genre and relative unfamiliarity to the audience; classical music tends to be a “niche” market.

Regardless of one’s musical genre preferences, the talent of the sisters cannot be denied, and their dedication and love for their craft shone through each of the songs.

The Ahn Trio is comprised of three Seoul-born, Juilliard-trained sisters: Maria on cello, Lucia on piano, and Angella on violin.

The sisters have performed at the White House, but Angella joked that “even cooler,” they once jammed with Prince.

They began the evening with a piece written and composed for them by jazz guitarist Pat Metheny. Described as an ode to nightlife in Seoul, the piece was brief, but had a decidedly mysterious tone.

The Ahns followed up with a piece entitled “Swing Shift,” composed by Kenji Bunch. Angella told the audience “we’re going to take you around the world,” and added that while they set the scene with Seoul nightlife, the “Swing Shift” pieces would sound reminiscent of an evening in New York City (two of the sisters now reside there).

From this piece, “Interhour” and “Grooveboxes” were standouts. Maria’s cello echoed Led Zeppelin’s “Kashmir” with a surreal ‘alone at 4 a.m.’ sound in the former, and there were unorthodox but ultimately groovy hints of salsa and disco in the latter (particularly from Lucia’s piano riffs and Angella’s Electric Light Orchestra-inspired violin work).

Post-intermission, the sisters returned to pay tribute to “rock songs we grew up listening to,” said Angella. “We think that these songs are classics,” added Maria.

They began with a cover of the Doors’ “Riders on the Storm,” which was easily my favorite of the night. Lucia’s piano made the opening notes sound delightfully like a horror movie, and the trio expertly wove their way through the song with hypnotizing finesse.

They followed up with Prince’s “Purple Rain,” performing an elegant, stately rendition that surely even the Purple One himself would enjoy.

Maria, who released a solo album of David Bowie cello covers during her “midlife crisis,” joked that she was able to convince her sisters to do just one song with her, “Space Oddity,” which, while easily identifiable, brought even more of an alienated, peculiar feeling with their classical interpretation.

The evening ended with “Skylife,” composed by David Balakhrishnan (incidentally, he is the founder of the Turtle Island Quartet, slated to play a Vail concert in February). The legend that classic rock, particularly heavy metal, is inspired partly by classical music could have used this finale as evidence.

In an alternate universe, the intensity of the violin and cello could have come from Black Sabbath, and the piano sounded reminiscent of blues-rock bands such as the Allman Brothers.

Although the Vail Series stuck to its classical music roots for this round, the Ahn Trio provided a show that even the least accustomed to the genre could enjoy.

Comic: “COVID & White Privilege”: Based on a true story