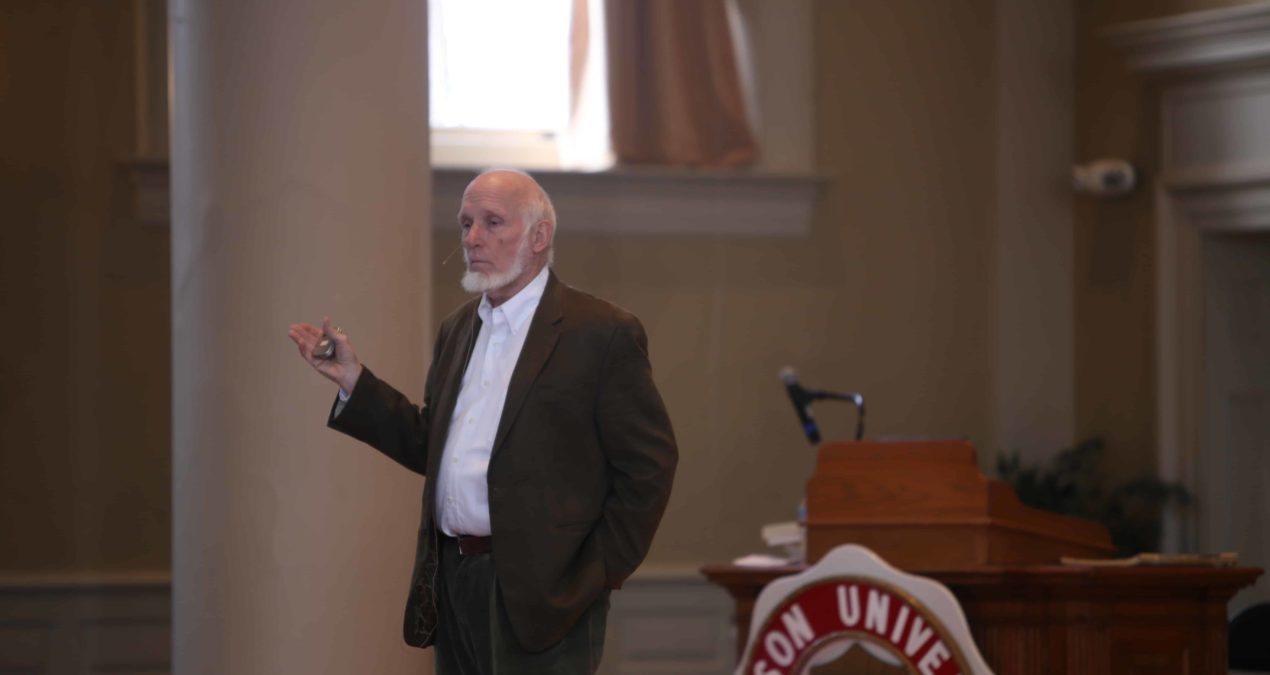 Celebrating the life and legacy of MLK JR.

Best-selling author of “Lies My Teacher Told Me” and professor of history James Loewen joked in front of a crowd of students, professors, alumni and Granvillians stood that “there are exactly eleven seats left in this room, so if you know anyone who didn’t come, remember to chastise them later.”

Loewen was brought to Denison to serve as the keynote speaker for the annual celebration of the life and legacy of Dr. Martin Luther King Jr.
During his keynote address, Loewen addressed his research in the factual inaccuracies that high school history teachers often teach their students, especially regarding what is arguably the darkest part of American history: slavery and the Civil War.

In order to prove his point, Loewen asked a simple question: “Why did the South secede from the Union?” He claimed that Americans always come up with four answers to this question: 1) slavery, 2) states’ rights, 3) the election of Lincoln and 4) overwhelming taxes and tariffs.

This, he argued, is one of the most fundamental issues with American history, proven right on Denison’s campus. The correct answer was slavery, though the election of Lincoln was the trigger to the succession of the states.
In order to prove his point, he read from the “Declaration of the Immediate Cause Which Induce and Justify the Secession of South Carolina from the Federal Union,” which was written by state legislatures in South Carolina just after they seceded.

In this declaration, he said, they actually say that they chose to seceded because the North would not comply to the fugitive slave laws previously implemented by the South. He noted that this is not the only infraction that has been made in regards to American history, and it results in “making us stupid.”

He said that it “minimizes the role of African-Americans, valorizes the Confederate cause, bolsters white supremacy, and it is one more way that American schools are biased in favor of white people.”

Loewen says that this inaccurate characterization of history has had a negative effect on American politics today in regards to the recent acts of police brutality against Mike Brown, Tamir Rice and Eric Garner.

However, he ended his talk to explain that his research is not based on making people feel guilty about the things that have already happen but to make sure that attendants of the speech do not become complacent in the way things are.
He said, “it’s our responsibility to improve the nation we live in.” He continued, “I don’t dwell on this to make us feel bad but to explain how this is still relevant.”

Students who attended Loewen’s talk appreciated that he frankly explained to students big holes in the way Americans are taught history in high school.
Morgan Sinnet ‘15, a biology major and psychology minor from Danville, Ohio, said, “I read the book for an education class, and I was glad to hear him talk about things that seem to be avoided in most history classes.”

The Women’s March is for every woman: from politicians to Denisonians