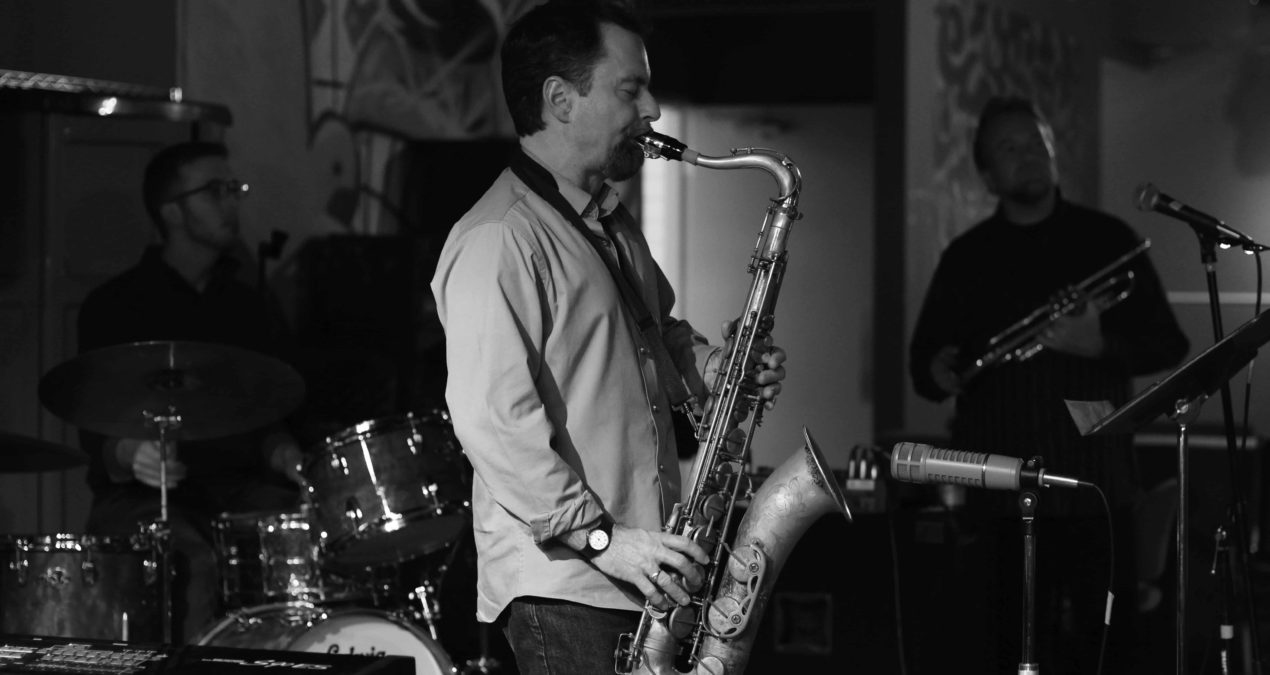 There are a lot of words I would use to describe the Bandersnatch but, classy is not one of them. What would you expect from a college run place that has graffiti covering the walls, and sells milkshakes and pizza bagels? But when you combine dimmed lighting with great acoustics and the professional sounds of the Pete Mills Quartet, the Bandersnatch could almost pass for a trendy – if not classy – jazz bar.

On Wednesday, February 11th the Pete Mills Jazz Quartet consisting of Pete Mills (saxophone), Rob Parton (trumpet), Erik Augis (piano), Greg Wolfram (bass), and Zach Compston (drums) played music from saxophonist Eddie Harris’ 1966 album, The In Sound. The performance was part of the Side One Series: a concert series the band began last year in which they perform music from selected iconic jazz LPs in their entirety.

As said by Mills himself, the performance was “all about the groove.”

“Eddie Harris’ music is about rhythm,” he said. “And when we play this music we are focused on rhythm and how we can translate what we do on stage to our audience”

The audience consisted of a wide variety of people including students and professors from the music department, and people who just happened to come upon the performance. According to Pete Mills, it’s this kind of atmosphere that makes the performance so worthwhile.

“We are always, however, very grateful for the opportunity to play at The Bandersnatch as it is a great room [with] good acoustics and the folks who are there really are supportive of what we do,” said Mills. “We do wish that there were a few more folks at the venue. This could add to the energy in he room.”

Seth Rogers, a Denison alum and current music theory and percussion professor, commented on this as well. “Informal showings are the best way to demonstrate the fun and joy of the music, and have the best opportunity to encourage new fans to listen. The idea of the people happening upon jazz for what may be their first listen can only help the music.”

Although jazz is performed fairly regularly in Granville, like at Moe’s Barbeque, it’s not found frequently on Denison’s campus.

“Of course I wish there were more jazz events on campus, especially more casual ones such as this one,” said Rogers. “It was incredibly sad to learn over the summer the funding for the monthly jazz series was line-item cut from the last DCGA budget.”

As said best by Chris Hoye ’16, “it’s great that we have an opportunity to interact with professors and watch them perform outside of the classroom.”

The geoscience department departed on their annual fall trip