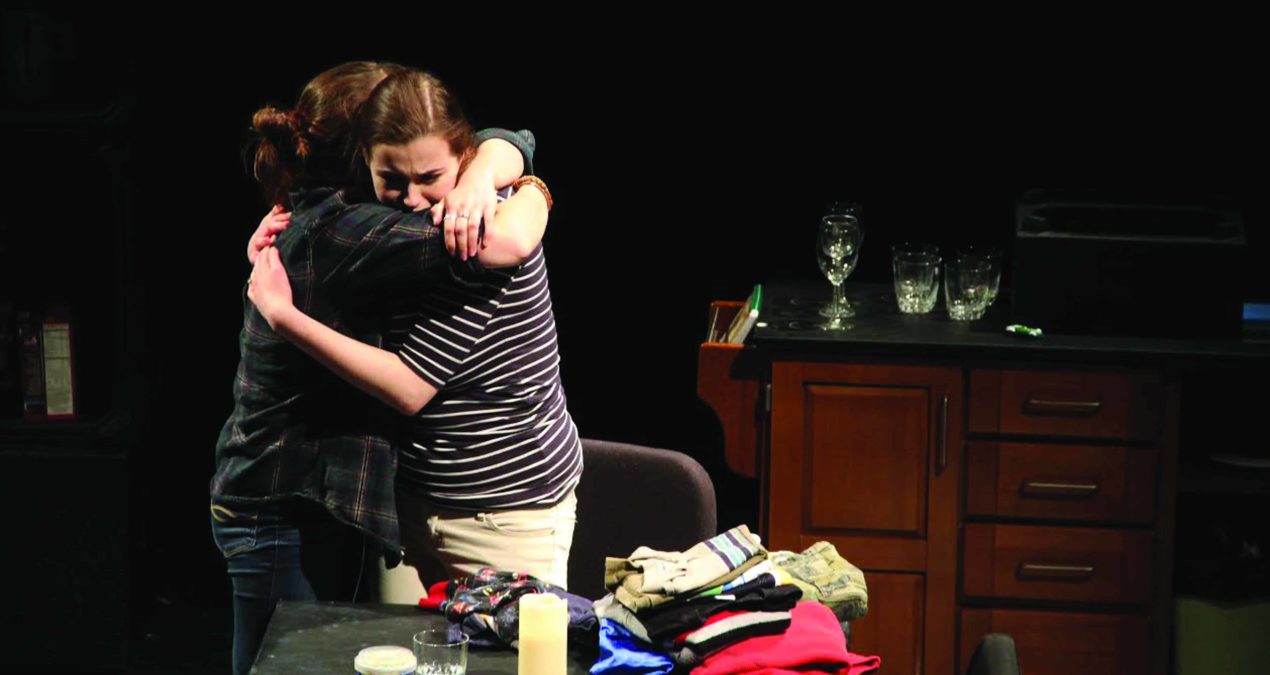 The Denison Independent Theater Association presented Rabbit Hole by David Lindsay-Abaire in the Burke Black Box Theater. The play was directed by Marc Weaver ‘17 under the mentorship of theatre department

Winner of the Pulitzer Prize for drama and nominated for several Tony awards, the play is a simply structured but deeply emotional tale of loss set in the midst of the comedy of family relationships. The story centers on the day-to-day experiences of married couple Becca and Howie, played by Mallory McGill ‘18  and Kevin Ralph ‘16, respectively, as they struggle with the aftermath of their four-year-old son Danny’s death.

The script is raw and tragic, but both McGill and Ralph met its intensity with both the chemistry to portray a complicated relationship and the talent to communicate their individual stories.

Allison Pineault ‘18 played Becca’s wildcard sister with fearlessness and a natural stage presence. Emily Ball ‘17 as Becca’s mother and Seth Schoenhaus ‘18 as Jason, the teenager who accidentally hit Danny with his car, performed with sensitivity. Overall, the cast was cohesive and the acting was strong.

Lines were clearly wobbly, but the cast recovered well from mistakes. The movement was rough at times, obscuring the acting with either odd blocking or messy execution. Though these actors needed no assistance in reaching the intensity called for by the script, the most powerful scenes were underscored by dramatic music, forcing the leads to fight unnecessarily against a feeling of fakeness and strained, cinematic melodrama.

The entirety of the play takes place in Becca and Howie’s home, downplayed the domestic and personal nature of the story. The thoughtful set design set a natural, private tone, though it seemed torn between minimalistic and realistic and lacked the level of detail needed for such a close audience. On the whole, the actors are carefully and appropriately costumed, though some details were odd or distracting. The lighting was well done, and creative use of projections made a scene in which Howie watches home video of his son immersive and powerful.

Unfortunately, the production never seemed committed to presenting itself as professional. Starting with a wobbly reading of information in the program by whom we must assume is the director, without the aid of an introduction and ending with a muddled curtain call, the play never pretended it was anything other than a student project. However, at the end of the day, DITA provided a group of students with the opportunity to take control of every aspect of production. Talented students had a chance to showcase their hard work and the community got a free night of good theater.

If the production bore all the marks of a student show, it can be excused by the fact that it was a student show, and the actors proved to be more than a match for any mistake that could be made.