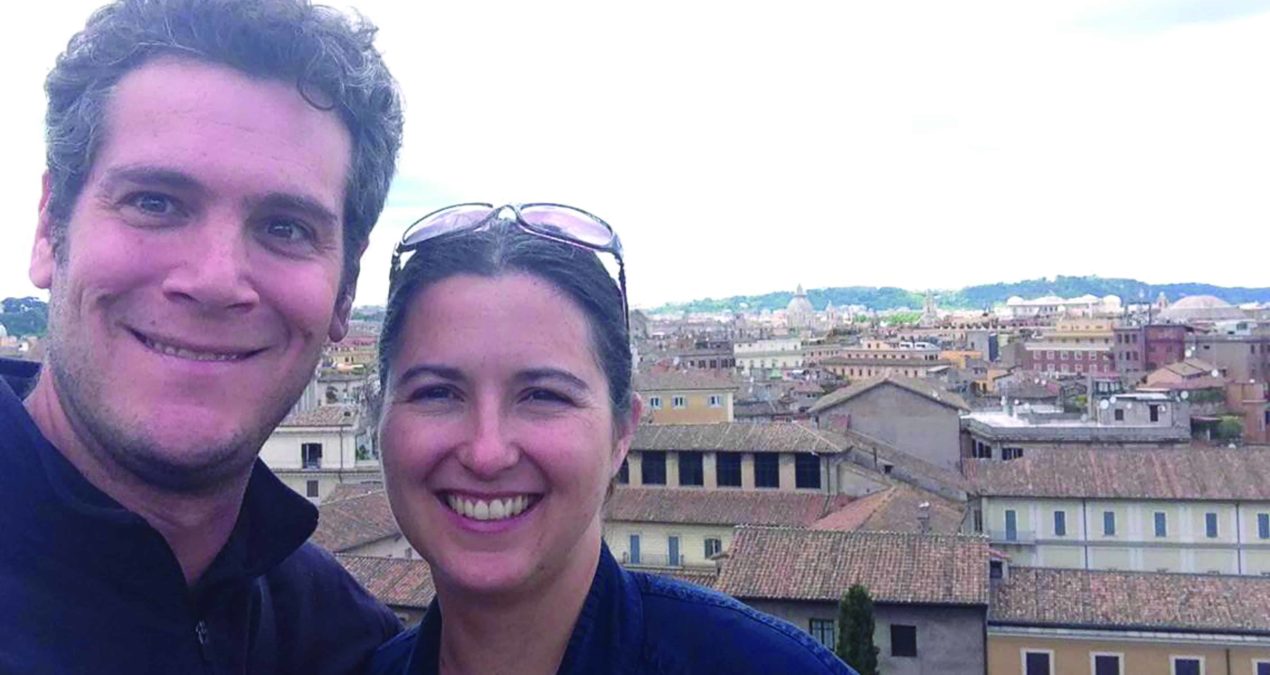 Imagine working in a field where your occupation may cause your spouse to be unemployed–or living four hundred miles away. This is the ‘two-body problem,’ described by Denison geoscience professor Erik Klemetti as “when couples made of two academics are trying to find a way to both be in the same place and both have employment that utilizes their graduate student training.” Kennedy and Goldman in San Francisco with their children, who lives in Granville and Madison, Wis.

Geoffrey Smith and Jessica Rettig, in Denison’s biology department, occupy a shared tenure position, with approximately half of the teaching load each. In an email, Smith and Rettig outlined advantages to this situation: “Our shared position has allowed us to team-teach, which we enjoy doing and which we think provides a richer experience to our students since we bring similar but also complementary expertise to our courses.”

Because they each teach half a course load, they can spend more time with their two sons, but they are compensated by the equivalent of a single paycheck. “We are expected to provide the same amount of service to the college, but in reality we contribute more,” they said. They are currently the only shared position on Denison’s faculty, but Provost Kim Coplin said she believes it has been “a very positive experience.”

The university’s position on spousal hiring is stated in the faculty handbook: Denison “attempts to offer continuing non-tenure-track appointments to qualified spouses/partners of faculty… initially contingent upon institutional need and the qualifications of the spouse/partner.” These partners are then ‘eligible’ for full-time positions that become available.

Denison faculty members Bill Kirkpatrick and Anna Nekola came to Denison uniquely well-equipped to deal with the two-body problem. While Kirkpatrick is a tenured communication professor, Nekola has a very diverse educational background, including musicology, communication, writing and women’s studies. “So far she has taught in five different departments and programs,” Kirkpatrick wrote. “If her specialty were more narrow, or in a field that we don’t offer here, regular teaching might be more difficult to come by.”

After graduating Denison, Stephen M. Kershner ’97 earned a PhD in Classics from SUNY Buffalo, and married Audrey Anton, who he described as “brilliant and creative; an intellectual rock star,” but said that “the fact that she is also an academic has put [his] own career on the knife’s edge.”

He and Anton taught at Denison for several years, non tenure-track. They hoped to negotiate a spousal hire when Anton was hired at Western Kentucky University in 2011, but they were facing schools’ increased austerity practices and reluctance to hire. Though Kershner had negotiated and begun a minor program in Classical Studies as an adjunct, he was not hired by WKU.

As a last resort, Kershner accepted a teaching position as Assistant Professor of Classics at Austin Peay State University in Tenn., where he teaches five classes in addition to an online class for WKU. After a one and a half hour commute each day, he has little time for the research that would help him achieve a tenure-track job.

“I do this because I do not want to leave the profession,” Kershner wrote in an email. “I am an academic in my soul… I also do this instead of moving someplace else and getting a more secure job because I want to live and be with my wife. That’s why I married her.”

Kershner said that spousal hiring is still a taboo subject in academia: “Most schools treat spousal hiring like a used car salesman treats a wonky dashboard light, there’s not a lot of honesty about the reality of the problem… Even though we have more or less worked it out, it has been a true and difficult struggle; emotional and soul-crushing.”

Anton advises both institutions to take a proactive approach to the problem, and academics to plan in advance: “If a university wants to get the best faculty, they should make it a point to hire their spouses,” she said. “If [a professor] is in a committed relationship, be prepared to have a long-distance relationship or for one of you to sacrifice your career and dreams to be together.”

Rebecca Kennedy, an Associate Professor in Classics, is living the two-body problem. Her husband, Max Goldman, is a Classical Studies professor at Vanderbilt University in Tennessee. Kennedy lives in Granville with her daughter, while Goldman has an apartment seven hours away in Nashville.

This separation is “more than a distraction,” according to Kennedy. She said they are “constantly thinking about how we can move together,” and the separate houses and travel are “a heavy emotional and financial burden.”

They have been living apart for six years, and Kennedy said that she can’t imagine doing it for 20. “I have respect and awe for colleagues who have done it in a pre-Internet age,” she said. Since she and Goldman are in the same field, they publish articles and books together. “It’s one of the ways we keep our marriage together,” Kennedy said.

Coplin said that Denison’s faculty is “fairly young,” with 90 faculty members hired in the past nine years–about 40 percent of Denison’s faculty, with a female majority. In relation to spousal hiring policies at similar institutions, Coplin said that Denison “is not dramatically different. Where we might be different is our family leave policy.” Denison’s parental leave policy allows both male and female faculty one semester with full pay or two semesters with partial pay when they have a baby.

Klemetti said this “progressive faculty parental leave program that I have used that allows faculty to spend more time with their young children…has definitely made life easier.” Klemetti, an assistant professor in Geoscience, has been at Denison since 2009 with his wife Susan, a visiting assistant professor in Environmental Studies. “Overall, the experience at Denison with regards to juggling two academic careers and now two children have been fairly positive,” Klemetti said.

But Susan’s ability to teach is limited by another aspect of faculty parenting–childcare. “The cost of daycare in Granville is about the same as the pay for teaching a single class on campus, so although Susan might want to teach more, it isn’t economically feasible,” Klemetti said.

Klemetti said that these policies and situations provide an opportunity for improvement: “If Denison implemented changes like hiring spouses/partners into the college or by offering job placement help or day care for families, then Denison could be seen as leading the way in making their faculty family-friendly.”

This same drive toward community has maintained Denison’s “affiliated scholars” program, which allows access to Denison’s library resources and computer resources, in addition to college stationery and fiscal agency in the grant application process. Coplin said this program helps “scholars who are affiliated with the Denison community in some way to be treated as a valued ongoing member of our community.”

While she and Kershner were working for Denison, Anton found that “Denison is far more fair to its adjunct teachers. Traditionally, the adjunct pay is triple that of the average… Had there been a position for both of us at Denison, we would have loved to stay.”

Kirkpatrick sees Denison on a path of improvement. “Across the country, colleges and universities are increasingly drawing on an adjunct workforce as a source of low-cost, easily exploited, and precarious labor,” Kirkpatrick said. “I’m proud that Denison treats its adjuncts, including spousal hires, much better than most other institutions and is looking seriously at ways to do even better. We can be a humane and supportive exception to some pernicious trends in academic hiring, and that means a much stronger institution to the benefit of everyone.”