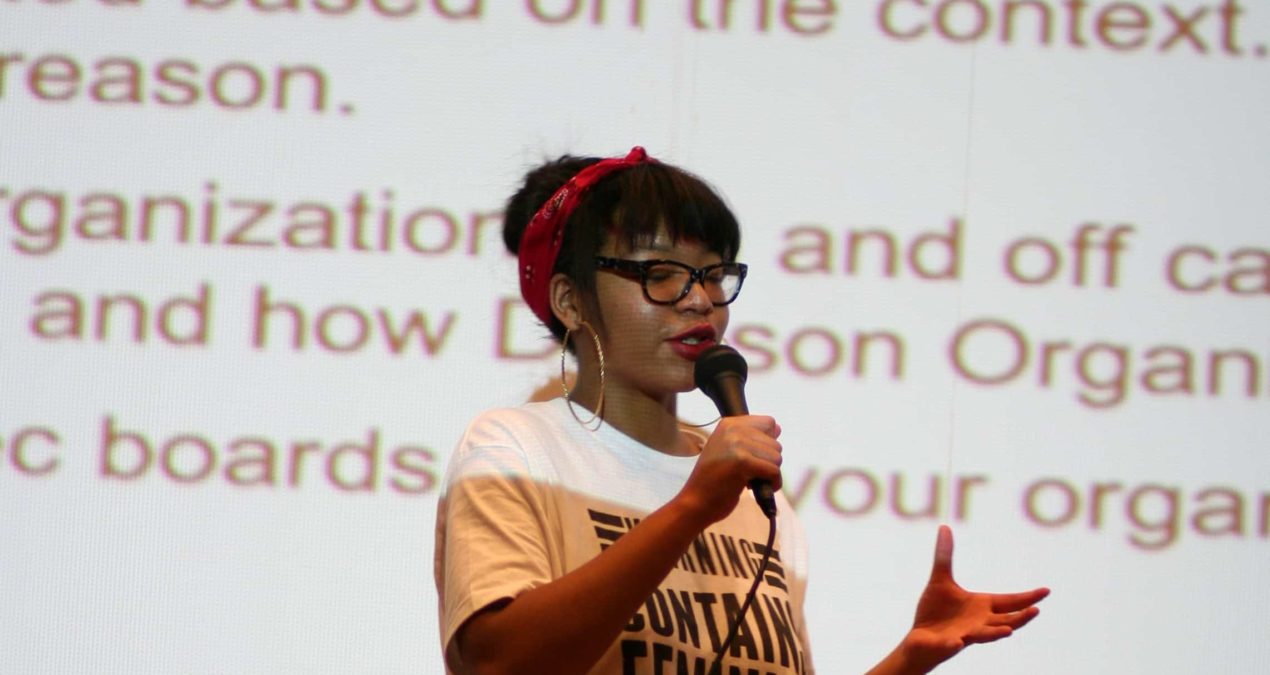 Hollie Davis ‘17, the activism chair for the Denison Feminists Club, stands at the head of the Slayter auditorium alongside the club’s president, Erin Katalinic ‘16, singing along to Beyoncé and other feminist artists. She is preparing to start the first ever Denison Feminists Activism Workshop.

Davis, a women’s studies major and art minor from Chicago, Ill., said that when she came to Denison, she saw the club’s purpose as both political and educational, and while the club has exercised its educational purposes, it hasn’t exactly lived up to its political potential.

“I started my position as the activism chair last fall, but I didn’t really do anything with it because I didn’t want to make it seem like I was bulldozing in,” Davis said.

However, now that the new semester is underway, she believes it is time to embrace the political nature of the club.

Davis also said that there were some members of the Denison Feminists executive board who were concerned with the negative image created by several Facebook threads that were taken too far. However, Davis asserts that “the 60 comment Facebook posts are not what the meetings are about. The meetings are an opportunity for all of us to create better versions of ourselves.”

This prompted the Activism Workshop, which was aimed to see what students wanted to see from the group in the coming semester. There, participants were provided with a list of potential events that Davis and the rest of the executive board came up with. These events will happen throughout the next calendar year.

Some of the events include an anti-human trafficking workshop, a visit from Congressman Pat Tiberi and a variety of off-campus events that members are welcome to attend.

After receiving feedback from participants of the workshop, Davis and the rest of the executive board hope to move forward in creating a safe place for everyone to engage in discourse and not feel “too afraid to disagree,” as the sophomore activism chair stated.

Their message and their decision to become a more activist organization was well received by workshop participants. Alexandra Richards ‘15, a sociology/anthropology major and women’s studies minor from Cleveland, Ohio said. “I was one of the people that was getting frustrated with the club before, even last semester. I can tell that they have been really going in a different direction and making an effort to take action and make a positive impact on campus.”

She continued, “It was evident in the way the workshop was structured around active events and collaborations with other groups on campus to actually make change. I thought the workshop was a first step in a very positive direction.”