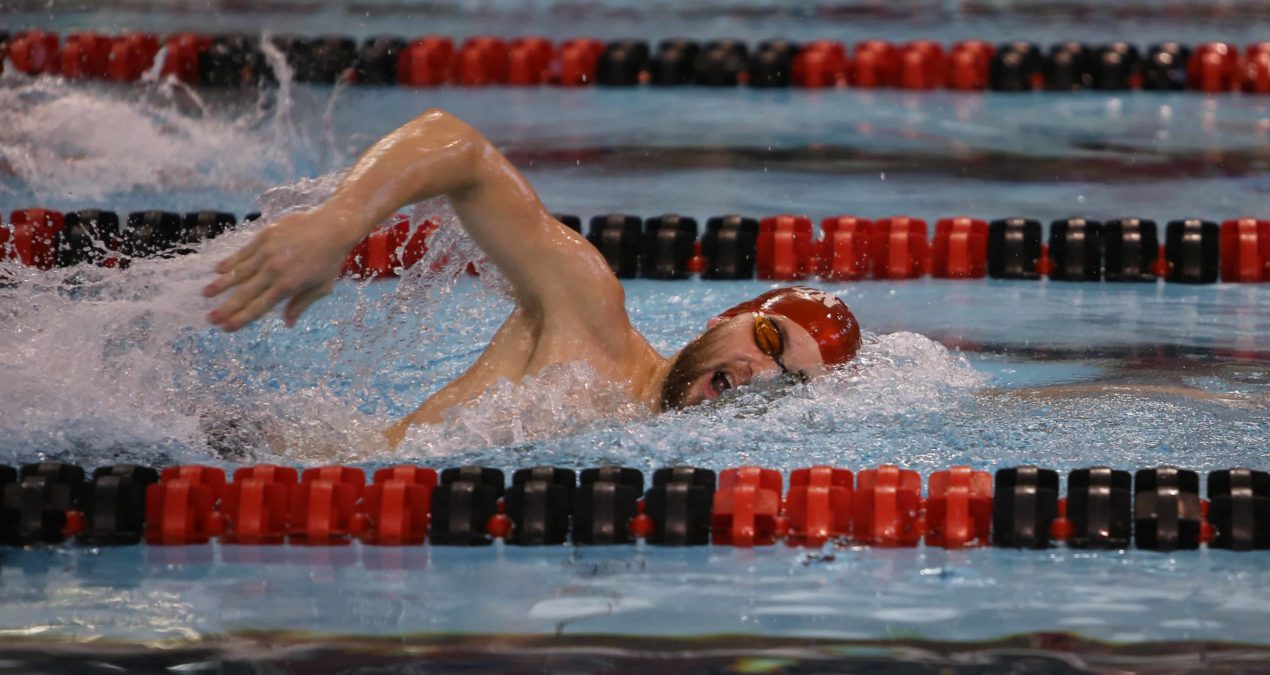 Roars bounced off the walls of Trumbull Aquatics Center at last season’s North Coast Athletic Conference Swim and Dive Championships. The violent purple attire of the Kenyon Lords clashed against the bright red gear sported by Denison supporters. Athletes and spectators were on tenterhooks as each race finished, because every point counted.

Both the men’s and women’s teams were looking to sweep Kenyon in a conference championship victory. The energy of competing in a high profile championship setting, coupled with tangled feelings caused by the heartbreaking loss of David Hallman ‘14, helped both teams secure the victory. Although melancholy, it was a victory nonetheless.

The Big Red will find themselves in a similar situation once again, as they compete against the other NCAC teams in the hopes of securing back-to-back conference championships, which begin tomorrow (Feb. 11) at Trumbull Aquatics Center.

Connor Dignan ‘15’s two national-record shattering diving victories on the 1-meter and 3-meter springboards were arguably some of the most outstanding performances at the meet. Dignan will return to defend his crown this week. The Big Red swept the top six spots on both boards, solidifying Denison’s position as a diving stronghold.

Dignan has continued to show improvement this season, and has emerged as a team leader as a result. Teammate Max Levy ‘17 has been strong in recent weeks, especially with his slew of recent top performances against

NCAC opponents DePauw and Ohio Wesleyan. Ben Lewis ‘16 was the runner-up at nationals on the 1-meter, while all three earned All America honors..

The men’s crew is made up of Dignan, Levy, Lewis, Brian Allen ‘17, Nathan Lightman ‘16 and Connor Dorff ‘15. Diving coach Russell Bertram is excited for the potential of his diving squad. “We’ve got five of the six boys qualified already,” Bertram said. “Last year we qualified four guys, we had five at the regional, and we qualified four [to nationals], and the fifth was the alternate. This year we’ll have five, maybe six, and my realistic goal is to get at least five of those in there.”

Sarah Lopez ‘17 leads the women’s side. Lopez recently won the 1-meter board against OWU with a score of 219.80. She finished in third place on that same board at last year’s championships. She has already earned one qualifying score and must post one more in order to continue on to the Regional Championships.  Her max degree of difficulty is 2.8. The dive involves an inward double somersault.  Carrie Bookheimer ‘17, Katherine

Hennigan ‘17 and Sterling Keiser ‘15 will compete alongside Lopez.

Kenyon’s Maria Zarka is the defending national champion on the 3-meter board and is the favorite heading into the championships. “It’s interesting competing against Zarka because you want to beat her, but at the same time she’s really nice. It’s part of diving culture to cheer everyone on.”

The team’s strength in diving is evident at the national level: “To qualify Lopez so that we’ve got a team of four, five or six heading to nationals…In diving, that’s a powerhouse,” Bertram said. “Most colleges, they’re lucky, to get two, three; I think we’re very blessed.”

Swimmer Conrad Wuorinen ‘16 said that Kenyon naysayers tried to pass off the entire team’s conference victory as a solo effort on the part of Bertram’s crew. “Kenyon is always upset because of how many points we can score because of diving,” he said. “It’s absurd; it’s swimming and diving, not just swimming. It’s like playing a football game without a kicker–how are you going to count for the extra points?”

Although the men’s team lost four-time national 1650-freestyle winner Al Weik ‘14 to graduation, Stuart Hohm ‘18 has stepped up to the challenge. The freshman ranks top-five in the nation in two of his events, and has already drawn comparisons to Weik.

“I see a lot in him of what I saw and admired in Weik,” Dignan says. “They’re both distance swimmers. Al left this school and Division III all around with a legacy of his swimming, and within the distances, and the mile and 500, and Stuart has a lot of the same characteristics. He’s very passionate, has an incredible work ethic, he’s ambitious, he’s resilient and he’s competitive. He is one of those kids who hates losing, no matter what it is, he’s not going to lose.”

Aaron Saccurato ‘18 will join Hohm in leading the distance swimmers. His time of 15:55.63 is currently the team’s top time in the 1650-free.

Key returning players include Wuorinen, Gus Evans ‘17, Damon Rosenburg ‘15, Ryan Fleming ‘16, Andrew Rich ‘16, Jack Lindell ‘17, Joe Brunk ‘16 and Al Nennig ‘17. Evans set a Denison record in the 200-breaststroke earlier this season with his time of 1:59.86. That swim made him the first DU swimmer to crack the 2-minute barrier.

Rosenburg set a NCAA Division III national record in the 100-breaststroke at the Miami Invitational last season, but his record was broken a year later at the same meet by Emory junior Andrew Wilson.

Wuorinen says that DU’s sprint group will need to focus on the relays in order to have an edge over Kenyon. “Kenyon has some pretty powerful relays this year,” he said. “If some of our underclassmen can step up, I think that we could challenge in any of our relays. If you can win all the relays, you can pretty much win the meet.”

Wuorinen also noted that Kenyon has two Division I transfers in seniors Austin Caldwell and Harrison Curley that could be a threat. Caldwell transferred from Pittsburgh, while Curley, who competed at the 2012 U.S.Olympic Trials, came from Division I powerhouse Florida.

Meanwhile, the women’s team will face a relatively young Kenyon squad. Of the 32 women on the team, only seven are seniors.

Carolyn Kane ‘17 will lead DU sprinters, while the duo of Campbell Costley ‘17 and Taylor Johns ‘16 are DU’s top distance swimmers. Ashley Yearwood ‘16, Molly Willingham ‘15 and Michelle Howell ‘15 are returners that will contribute key points to the team. Newcomer Halli Garza ‘18 has had strong swims this season as well.

The team lost Natalie Lugg ‘14 to graduation. Lugg had a banner weekend at the National Championships, where she swam away with the team’s sole event victory. The women had 26 All America performances.

Kenyon junior Katie Kaestner will be difficult competition for the Big Red sprinters. She has been named NCAC Athlete of the Week twice this season, and owns the top positions in the 200 and 100 breaststroke events.

Yearwood is confident that her team will come through once championships start. “There’s this palpable energy on the pool deck right now. It’s coming up on us really quickly,” she said. “A lot of us are going to surprise ourselves in what we do, and how fast we are going to go.”

Championships are set to begin on Feb. 11 and continue through Valentine’s Day. Members of the swim team attended a memorial service for David Hallman ‘14 on Sunday evening, exactly one year after his passing.

Swimmers and divers will honor Hallman’s name with their performances.

“The prayer that was said at Dave’s service last year will be repeated by the chaplain,” Dignan said. “I think that’ll be good; it’ll be a way to get everything out and then start focusing on what we need to do, which is focus on conference. I know that’s what he would have wanted.”