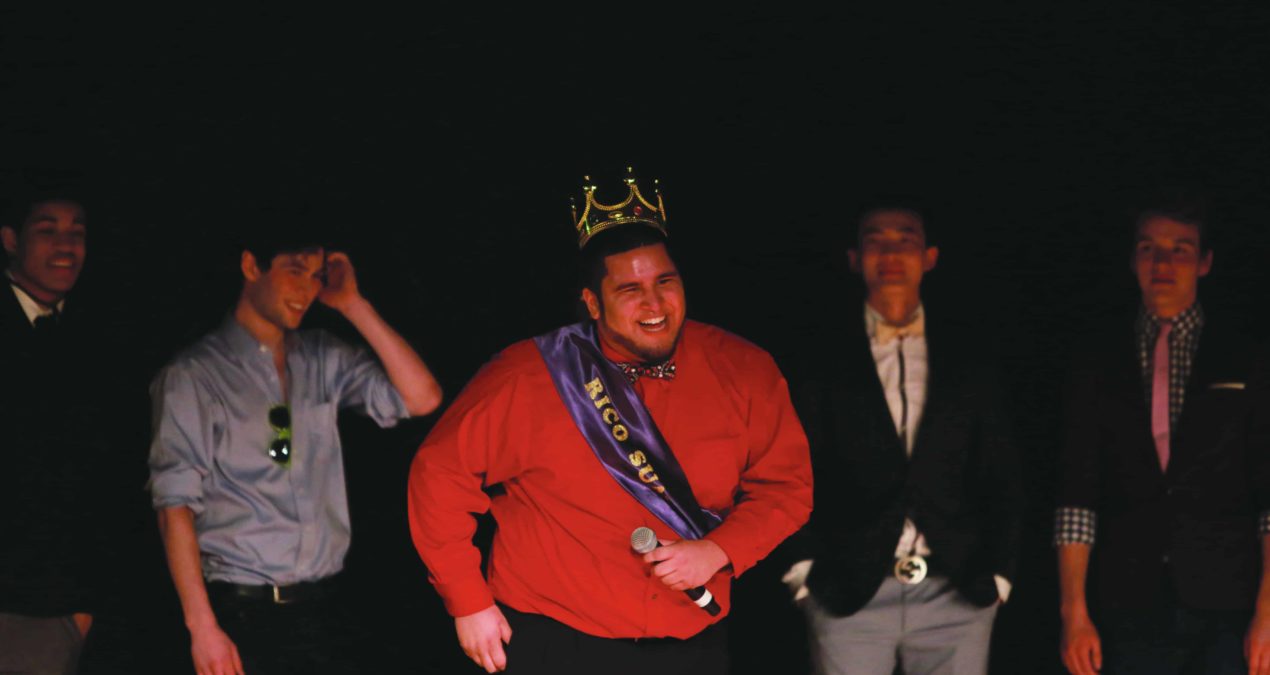 Pop and hip hop music boomed throughout the third floor of Slayter on Saturday night as the MCs stepped onstage to introduce the judges and contestants for the 2015 Rico Suave pageant. The room was crowded to the point that students and audience members found themselves frantically searching for room to see. Others sat in The Nest, sipping lemonade and chuckling at the contestants’ antics.

Rico Suave is Sigma Lambda Gamma’s philanthropy event, and it benefits the charity PADRES Contra el Cancer. All of the funds collected will go towards helping Latino children who are battling cancer. The sisters of Sigma Lambda Gamma also collected books for their Better World Book drive.

Allie Colina ‘14, Professor Tabitha Chester, Brittany Rojas ‘15 and Jorge Reynoso ‘18 served as judges for the three-part competition that included a swimwear section, a talent round and a question round.

According to Celeste Alsina ‘15, SLG’s Fundraising Chair, contestants are selected based on nominations from the sisters of SLG. She said, “We look for a diverse group of individuals that represent a range of communities on our campus.”

At the conclusion of the competition, Manny Santana ‘15 was named Rico Suave 2015 and Daniel Critchfield ‘17 was awarded the title of “Mr. Congeniality” for his enthusiasm throughout the competition.

Each of the guys gave their best versions of a “runway” walk as MCs and SLG sisters Marina Martinez ‘15 and Julieta Diaz ‘16 announced their name, talents, hometown and major.

During the talent portion, Tijerina freestyle rapped for the audience, while Harris performed an impressive dance, which he called an “evolution of 21st century hip hop.” The sophomore’s intense facial expressions emphasized the different characteristics that hip hop has taken on. His performance to the Rej3ctz’s “Cat Daddy” was especially memorable.

Critchfield dressed up in matching tutus with a friend, Saul Zamora ‘17, for an amusing interpretive dance to the melancholy strains of “My Heart Will Go On” from Titanic. Their performance involved a giant beach ball, which they passed between each other as they slowly shuffled around the stage. The duo executed their passes with complete concentration  and earned a round of applause from the audience when Critchfield climbed under Zamora.

Martinez said that Critchfield’s contribution to the talent round stood out to her. “When he brought Saul out to do the interpretive dance with the volleyballs and tutus, it was just really creative, like who thinks of that?”

Anderson, who played Roger in the student production of Rent last semester, played guitar as he serenaded the audience with a song that he wrote himself. The freshman, who is also a Hilltopper, did a good job of including the audience, encouraging them to clap along with his music.

Santana walked onstage to loud chants of “Manny, Manny, Manny” from the audience, and enthusiastically began to read a poem that he wrote called “Yellow Fellow”, dedicating it to “all of my homies out there grinding.” He has been writing spoken word since his freshman year.

Tseveensuren did the dance to Beyoncé’s “Single Ladies.” The freshman got very into his performance. “I practiced for it about three hours,” he said. “I watched a lot of YouTube videos explaining how to do the dance, but I decided to throw in my own mix because the majority of the time I couldn’t really follow Beyoncé’s eloquence. However, when I actually did the dance in front of the stage, I forgot some of the moves, so I improvised.”

LeBlanc recruited a judge to toss Bugles in his mouth. Although he failed to catch most of the chips, he still received laughs from the audience.

Pageant attendee, Sara Greiner ‘17, was impressed with Rico Suave. “The guys were hilarious and some of them had some serious talent,” she said. “It was so nice to see them having fun on stage and doing it for a good cause at the same time. The place was packed. We had to move around a couple of times just to see.”

During the Q&A round, each contestant was asked why they should be crowned Rico Suave 2015, along with another question.

Santana, who has attended every pageant since his freshman year, said that, “My father [motivates me]. He was born in the Dominican Republic, he moved here when he was in his 20s and he’s a mechanic. He struggled to get me all the things I needed, but he always has. I’m here for him, to make him proud.”

Each answer given by the contestants was a combination of downplayed humor and sincerity. Many said that they appreciated the cause and that it was fun to be a part of the pageant.

Following the awards ceremony, each contestant was placed on the auction block and the audience was given the opportunity to place bids on them in order to win a date with them on Sunday evening.

Most of the men went from $20-$70. Tseveensuren was bid on for $150, more than twice what the other contestants drew in. In addition to uniting students from all walks of life, Sigma Lambda Gamma raised a record $603.50 at this year’s edition of Rico Suave.

In the words of SLG President Daisy Ochoa ‘15, “I thought that it was one of the greatest things ever to have diverse people join together to support an organization that helps to improve the lives of others. Moments like these remind me why Denison is a great campus.”

“A-level stars” invited by the Music department this fall